Accessibility links
On Sept. 11, Paper Memories Fell from the Skies All Things Considered co-host Robert Siegel reflects on the scraps of paper that cascaded from the skies on Sept. 11.

On Sept. 11, Paper Memories Fell from the Skies

On Sept. 11, Paper Memories Fell from the Skies 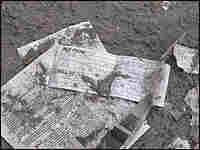 Robert Siegel's radio archive is full of treasures large and small. He joined NPR in 1976 and is currently a host of All Things Considered. In this new column, Siegel will dip into his radio past, reintroducing the stories that have meant the most to him over the years.

On the morning of Sept. 11, 2001, I was, by chance, in midtown Manhattan scheduled to go downtown at 9:30. Events intervened and I spent the week co-hosting All Things Considered from the confines of NPR's New York Bureau, which swelled with reporters arriving from distant locations. Another familiar face seemed to turn up every hour.

The day after 9/11, I went downtown to the edge of the inferno that we had just begun to call Ground Zero. The brief essay that I wrote about scraps of paper that lined the streets nearby struck a chord with many listeners. Paper, after all, is the great product of Manhattan: securities analyses, stock certificates, depositions, federal filings, licenses. It is the stuff that enters the workplace unfinished and exits filled with the marks of commerce, finance and government, signed, sworn or notarized. The papers underfoot, I found, documented what a nexus the World Trade Center had been, linking people all over the world through commerce.

One note that I added on the first anniversary of 9/11 still bears repeating: When we were in New York that week, with each day it became more likely that the skies held no further menace and the attacks were over, but we could not be sure. Every noise, or commotion or expression of interest by the police in a parked van sent the adrenaline flowing. Time, distance and experience may have diluted that sensation, but its essence survives in our national preoccupation ever since with security and counter-terrorism.

Tattered Pages That Tell a Story

Tattered Pages That Tell a Story

Nature ordained a blue, cloudless sky for New York today; a perfect canopy for a temperate, end-of-summer-not-quite-autumn day. But as you walk south toward the World Trade Center site, you have to look back uptown to remember the impeccable weather.

Downtown at Chambers Street, where Hudson Street and West Broadway form the point of a triangular, vest-pocket park, the sky is overcast with dust and ash. The air is so thick with it, it makes you cough. The emergency workers all wear masks. The sidewalk is coated with a dusting of the stuff, which is the pulvarized remains of hundreds of offices -- offices that employed as many people as you would see in a major-league ballpark during a pennant race.

And in the dust, you find paper: some newspapers, some magazines, but mostly artifacts that document what people did for a living in those offices. A single page with three holes punched for a loose-leaf binder is a New York state tax form. The Chegoku Bank of Japan filed a surcharge return in 1998. Their offices were in One World Trade Center.

A tattered page from a court reporting service is the deposition of one P. McJoynt. It is Page 159, ripped from the context of whatever litigation occasioned it. "I didn't see that question in here," P. McJoynt is quoted as saying. "Question: 'OK, what information would we need to find?'"

'P. McJoynt' turns out to be Pat McJoynt, a banker with Keefe Bruyette and Woods in Columbus, Ohio. She told me this afternoon the deposition was on file in the firm's New York office at the World Trade Center. That's where their general counsel is. The past tense still comes unnaturally to people.

Another page in the dust is a resume for one Gil Avital, an Israeli with a diploma from the Sommelier Society of America. I called him up and he knew at once what I'd found. He'd just sent in the resume, applying for a job as dining room manager at Windows on the World, "the most famous restaurant in the world," he called it. It was the restaurant at the top of the World Trade Center, with a view so vaunted that from its windows the islands of New York City actually looked like islands.

Avital told me that he and his wife had wondered aloud, What if he'd been called for an interview? Now that resume is just one among many scattered artifacts of jobs and of dreams that were.