Accessibility links
Report Faults Tomlinson for Broadcasting Violations A new investigation of the Broadcasting Board of Governors finds that its chairman repeatedly violated federal statutes. The chairman, Kenneth Tomlinson, has been in hot water before as head of the Corporation for Public Broadcasting, but he tells NPR it's all politics. 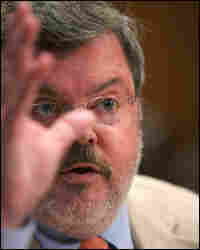 A new report by a federal investigator, obtained in full by National Public Radio, has found that Kenneth Tomlinson repeatedly violated federal statutes in his role as chairman of the Broadcasting Board of Governors.

The board is an obscure federal agency with a tremendous reach: It oversees the Voice of America, Radio Marti, the Arab-language Alhurra, and most of the rest of the U.S. government's broadcast services abroad.

The State Department inspector general found that Tomlinson had improperly hired a friend as a contractor, starting at $88,000 a year; that Tomlinson had staffers run personal errands, such as buying a belt, flowers, and books; that he charged the government for too many hours on the clock; that he charged the agency for days he also worked for the Corporation for Public Broadcasting; and, incredibly, that Tomlinson operated his horseracing business out of his government office.

Tomlinson, who was forced to resign from the federally funded Corporation for Public Broadcasting last year after being accused of overstepping his authority as chairman there, disputes the charges.

He counters, "I can't wait for this fight, because the distortions are not to be believed."

Tomlinson spoke to NPR in his first extensive remarks about the investigation. He is a conservative with close ties to the Bush administration, and he blames the new inquiry on Democrats on the Broadcast Board of Governors.

"You're talking about a report that was generated from partisan differences on this board," Tomlinson says.

Two of the three Democrats on the board did not return calls. The third, Joaquin Blaya, declined to comment, as did former Democratic board member Norman Pattiz, who often clashed with Tomlinson.

The investigation was prompted by three Democratic lawmakers who forwarded complaints about Tomlinson from Board employees. One of the lawmakers, Rep. Howard Berman (D-CA), is calling for Tomlinson's resignation and says the findings are indisputable.

"Each one is serious," Berman says. " Together they show an abuse of office that's quite flagrant."

The friend Tomlinson hired as a contractor is Les Daniels. Daniels retired in 1997 from Voice of America after a long career there working on logistics. Tomlinson remembered him from his own days leading the Voice of America in the early 1980s.

But the inspector general and the broadcasting agency's lawyers found Tomlinson didn't have the legal authority to put him on the payroll. Tomlinson says his friend helped again with logistics, and offered advice on how to boost morale -- suggesting an award for teamwork, for example.

Daniels told investigators he shredded his sole written memo because it was so sensitive. Tomlinson tells NPR that Daniels' reports were delivered in person to him, verbally, though his contract called for written reports.

Daniels no longer works there and could not be found for comment.

As for the horseracing charges, Tomlinson says his off-hours passion is only a minor diversion at work. He owns several horses named for Afghan figures at his Virginia stable, Sandy Bayou.

Tomlinson made more than 400 calls from government phones and sent or received more than 1200 e-mails on his official account related to horseracing. He was repeatedly in touch with his horse trainer and even emailed a Broadcasting Board employee and a Senate staffer dangling an "investment opportunity" in front of them -- and urging them to bet on his horse Massoud.

Tomlinson says that amounts to little more than a smattering of emails and calls a day.

"You can't question the contributions I've made in terms of time I've spent on BBG activities. I'm a hard worker," he says.

In fact, the inspector general found Tomlinson worked too much. The investigation determined he violated federal statute over the past three years by requesting compensation well above the 130 days allowed for the part-time position -- averaging instead 188 paid days.

Tomlinson says it was always understood his job would be more or less full time. But the report found Broadcasting Board lawyers had cautioned Tomlinson about it shortly after he took office in 2002 -- and again during ethics sessions.

But Tomlinson says he's ready to stand his ground at the Broadcasting Board of Governors.

The White House re-nominated Tomlinson for a second full term as chairman of the Broadcasting Board -- but the Republican-led Senate Foreign Relations Committee now says it won't even consider the idea.