Accessibility links
From Sufjan to Solo, a Star Turn To fans of Sufjan Stevens, Shara Worden is best-known as one of the backing vocalists in his band. On her own, Worden is a remarkable chanteuse who goes by the moniker My Brightest Diamond — and brings to mind the work of Jeff Buckley, Edith Piaf and Nina Simone.

From Sufjan to Solo, a Star Turn

From Sufjan to Solo, a Star Turn

Something of an End 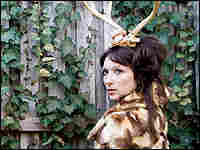 To fans of singer-songwriter Sufjan Stevens, Shara Worden is best-known as one of the cheerleaders and backing vocalists in his band the Illinoisemakers. On her own, sans batons or a shirt with a big letter "I" on it, Worden is a remarkable chanteuse who once called herself "AwRY" but now goes by the moniker My Brightest Diamond. Recalling the work of Jeff Buckley, Edith Piaf and Nina Simone — Worden often covers Piaf and Simone live — the gripping "Something of an End" sets the stage for her debut as My Brightest Diamond, Bring Me The Workhorse.

Propelled by creeping orchestral strings, which evoke a sense of theatrics more in line with a Kate Bush epic or a Peter Gabriel classic, "Something of an End" is a revelation. Combining brainy indie-pop with touches of art-rock and classical music, Worden's work — and her first single in particular — radiates brilliance to match her considerable ambition.

Album
Bring Me the Workhorse
Artist
My Brightest Diamond