Accessibility links
Arab Skepticism Shifts on Sept. 11 Attacks The majority of people in Indonesia, Turkey, Egypt and Jordan say they do not believe Arabs carried out the attacks of Sept. 11, 2001. A majority of British Muslims and 46 percent of French Muslims also share this view. And in Pakistan, the number is 41 percent.

There is a body of opinion, especially among Muslims -- despite the 9/11 Commision's findings and the spread of videos puporting to show Osama bin Laden taking credit for the terrorist attacks -- that bin Laden, al-Qaida and more than 20 young Arab men did not conspire to fly airliners into the World Trade Center and the Pentagon.

The majority of people in Indonesia, Turkey, Egypt and Jordan say they do not believe Arabs carried out the attacks of Sept. 11, 2001. A majority of British Muslims and 46 percent of French Muslims also share this view. And in Pakistan, the number is 41 percent.

The statistics come from the June 22, 2006, Pew Global Attitudes Project on "The Great Divide: How Westerners and Muslims View Each Other."

Despite the poll numbers, attitudes are shifting in Jordan, and people are more likely to blame al-Qaida for the attacks, says Ayman Safadi, the editor of the Al Ghad newspaper in Amman, Jordan.

But, Safadi says, a strong culture of conspiracy theories -- coupled with a defensive attitude among Arabs -- could explain the recent poll numbers.

Robert Siegel talks with Safadi and with Andrew Kohut, director of the Pew Research Center for the People and the Press.

Analysis is provided by NPR's Michele Norris and David Greene, with Tod Lindberg of the Hoover Institution and E.J. Dionne of the Brookings Institution. 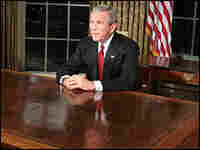 President Bush sits at his desk in the Oval Office after addressing the nation in a rare prime-time speech. Jim Watson/AFP/Getty Images hide caption

On the fifth anniversary of the Sept. 11, 2001, terrorist attacks, President Bush pays tribute to those who lost their lives -- and to those who struggled to save lives that day.

Speaking to the nation in a live address from the Oval Office, President Bush recalled the attacks that killed some 3,000 people five years ago, in New York, Shanksville, Pa., and the Pentagon.

President Bush also looked ahead to the challenges the United States faces as it tries to prevent another attack on its home soil. Speaking about the global effort to combat terrorism, the president described it "is a struggle for civilization."

"If we do not defeat these enemies now," he said, "we will leave our children to face a Middle East overrun by terrorist states and radical dictators armed with nuclear weapons."

President Bush urged Americans to show resolve in fighting terrorism, stressing that his policies will prevail in the end.

"We will defeat our enemies, we will protect our people," the president said. "And we will lead the 21st century into a shining age of human liberty."

The president's speech also dwelt on Iraq -- and questions over its place in the fight against terrorism.

"I am often asked why we are in Iraq when Saddam Hussein was not responsible for the 9/11 attacks," President Bush said.

"The answer is that the regime of Saddam Hussein was a clear threat. My administration, the Congress, and the United Nations saw the threat - and after 9/11, Saddam's regime posed a risk that the world could not afford to take. The world is safer because Saddam Hussein is no longer in power."

And despite setbacks in Iraq that have included sectarian violence and insurgent attacks, President Bush said that democratic reforms will take hold in Iraq and in the Middle East.

In pushing for democracy in the region, President Bush said, the United States is "offering a path away from radicalism. And we are enlisting the most powerful force for peace and moderation in the Middle East: The desire of millions to be free."

How Westerners and Muslims View Each Other