Accessibility links
Study Details Benefits, Limits of Green Tea A new study finds that green tea significantly reduces the risk of death from many causes, including heart disease. The study did not find, however, that green tea has any effect on cancer, as has been previously claimed.

A new study finds that green tea significantly reduces the risk of death from many causes, including heart disease. The study did not find, however, that green tea has any effect on cancer, as has been previously claimed.

The study took place in northeastern Japan, where 80 percent of the population drinks green tea. Researchers looked at more than 40,000 adults and compared those who drank less than one cup of tea a day to those who drank three to five cups a day. They found that over the span of 11 years, those who drank more tea were less likely to die of heart disease. Epidemiologist Shinichi Kuriyama from Tohoki University School of Medicine headed the study.

"We think our findings may explain different mortality profiles between Japan and the U.S," Kuriyama says. "Now, the Japanese have longest longevity in the world."

The study showed that women saw a greater decrease in heart disease than men. For women who drank five or more cups of green tea daily, there was a 31 percent lower risk of death from heart disease. For men, the risk was reduced by 22 percent. For both men and women the biggest decrease was in death due to stroke.

Joe Vinson is a biochemist at the University of Scranton in Pennsylvania who studies antioxidants and food. Vinson says the results of the study are important but not conclusive.

A rigorous long-term clinical trial would be needed, he says, to solidly establish cause and effect.

Another Spot of Tea, Anyone? 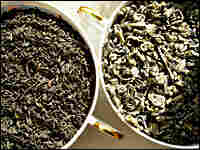 As Jeffrey Blumberg, professor of nutrition at Tufts University says, "When you've been around 5,000 years, lots of stories get built up." Below, some clarification on what has become the murky world of tea research and consumerism.

White tea, green, oolong and black teas all come from the same plant: Carmellia sinensis. The type of tea is determined by how the leaves are processed, how much fermentation, or oxidation, they go through. Whereas green and white teas are non-oxidized, oolong is partially oxidized, and black tea is fully oxidized.

Red tea, as it is referred in the West, is not a tea! It is a tisane, an herbal infusion, from an entirely different plant. Red tea comes from a South African flowering shrub called a rooibos plant, and is mild in flavor. Often other ingredients, such as cinnamon or vanilla, are added to it. In Asia, red tea can also refer to oolong tea.

Though black and green tea are chemically dissimilar, research hasn't proven that one type of tea is better for your health than the other. In fact, says Professor Joe Vinson at the University of Scranton, "Nobody has compared green and black tea, except in animals."

If you are interested in getting caffeine, get it with antioxidants, Vinson, says. He recommends bottled tea, even if it has sugar, over soda because of the added antioxidants in tea.