Accessibility links
What Happened on New Orleans' Danziger Bridge? In the chaotic days after Katrina, police opened fire on a bridge in New Orleans, killing two people, including a mentally retarded man. Police say they shot in self-defense. Now, a grand jury is looking into the incident. 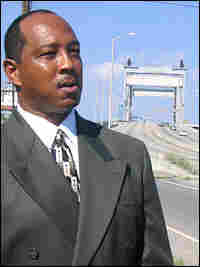 Lance Madison, shown at the Danziger Bridge in June 2006, has filed a lawsuit charging that New Orleans police on Sept. 4, 2005, falsely arrested him and shot and killed his brother, Ronald, who was mentally retarded. Anne Hawke, NPR hide caption 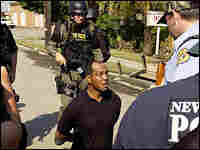 Lance Madison is shown being arrested on Sept. 4, 2005, after gunfire erupted on the Danziger Bridge in east New Orleans. NNS/Times-Picayune /Landov hide caption 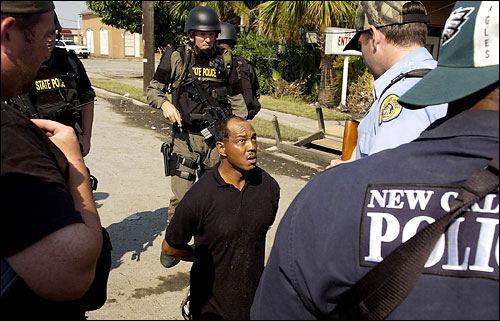 Lance Madison is shown being arrested on Sept. 4, 2005, after gunfire erupted on the Danziger Bridge in east New Orleans. 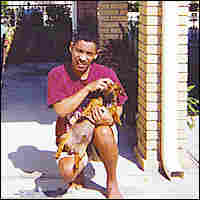 Ronald Madison, with one of his family's dogs, died after being shot on the Danziger Bridge. Police accounts say he sustained one gunshot wound, while two different autopsies show he was hit with seven bullets. Courtesy Madison Family hide caption

The New Orleans Police Department's official account of the events on the Danziger Bridge, Sept. 4, 2005, says Ronald Madison, the "unidentified gunman," received one gunshot wound before dying, but autopsy reports (below) show he was shot seven times.

Further fact-checking also revealed that two officers were never down at the scene, the cause of the original call, and that the main complainant David Ryder, identified as a St. Landry Parish deputy sheriff, was in fact a private citizen helping with post-Katrina rescues. 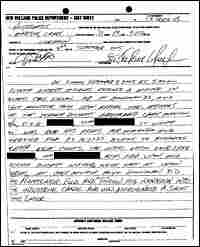 The Madison family lawyer notes that the final lines of the original New Orleans Police Department Gist Sheet describing the Danziger Bridge incident were added by a different person. He says the police are trying to frame Lance Madison. In sworn testimony, the NOPD's Sgt. Arthur Kaufman said he added the lines to the report later because "I was told that by one of the other officers." hide caption 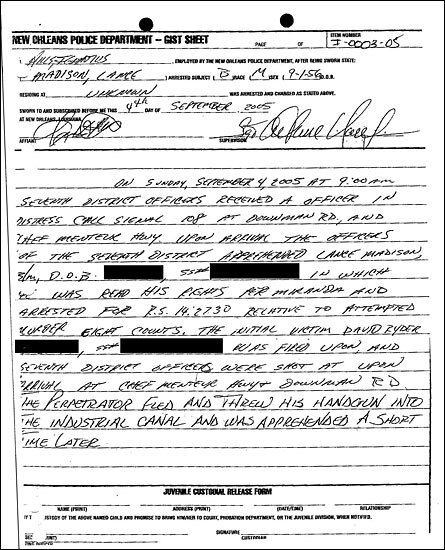 The Madison family lawyer notes that the last three lines of the New Orleans police's Gist Sheet describing the Danziger Bridge incident -- "The perpetrator fled and threw his handgun into the industrial canal and was apprehended a short time later" -- were added by a different person. He says the police are trying to frame Lance Madison. In sworn testimony, the NOPD's Sgt. Arthur Kaufman said he added the lines to the report later because "I was told that by one of the other officers."

The autopsy of Ronald Madison conducted by Dr. James Traylor of the New Orleans Coroner's Office found seven gunshot wounds — five to the back. 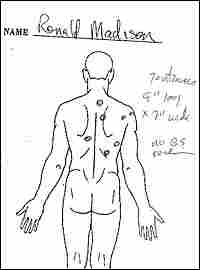 The lawsuits focus on an incident that happened on a bridge in east New Orleans. Two people were killed, including a mentally retarded man shot in the back; two others were maimed.

The police say they were firing in self-defense. Now, a grand jury has begun looking into the shooting.

It's come to be known as the Danziger Bridge incident.

At 9 a.m. on Sunday, Sept. 4, six days after Katrina, police received a Signal 108: Two officers down, under the concrete lift bridge that spans the Industrial Canal.

Seven officers rushed to the scene.

Police say when they arrived, at least four people were shooting at them from the base of the bridge. Officers took positions and returned fire. The official police report identifies two sets of gunmen going up the east side of the half-mile-long bridge.

The investigation hinges on whether these people were the shooters, as the police maintain, or whether they were innocent civilians in the wrong place at the wrong time, as the lawsuits claim.

'I Didn't Do Anything Wrong'

One of the suspects, Lance Madison, has been arrested and charged with eight counts of attempted murder against police officers.

"I didn't do anything wrong, and I had no reason to be arrested. I was up here trying to seek help for me and my little brother, trying to evacuate from the devastation going on down here," says Madison, a 49-year-old former college wide receiver, standing at the foot of the bridge where the incident occurred.

Police say Madison and another perpetrator were firing at officers as they ran up the bridge.

Madison, a 25-year employee of Federal Express, has no criminal record and is a member of a respected New Orleans family.

The man he was with -- referred to by the police as "the unidentified gunman" -- was his brother, 40-year-old Ronald, who had mental retardation. His family describes him as a childlike soul who loved the family's two dachshunds and watched Three Stooges videos.

From One Tragedy to Another

Lance says that on that Sunday morning, he and Ronald -- their homes flooded -- were crossing the bridge on their way to another brother's dental office where they were staying after the storm.

Lance says there was a group of teenagers near the bridge shooting at people. He says that when the police arrived, they never identified themselves before opening fire.

"And we just kept running up the bridge, and that's when I noticed one of the guy's jumped out of the truck had a rifle pointing towards me and my little brother, and shot my brother in the right shoulder," Madison says.

Police say an officer saw Lance toss a handgun into the canal. Lance says neither he nor Ronald was armed.

The police report says that when the pair reached the other side of the bridge, an officer approached Ronald. At that point, the report continues, Ronald reached toward his waist and turned toward the officer, who shot him dead with one bullet.

Autopsy findings refute the police assertion. The pathologist found that Ronald Madison had seven gunshot wounds -- five of them in his back.

"He was like the sunshine of our family. We really miss him. It's just unbelievable what happened. And I hope nobody has to go through what we've been through," Madison says.

But the second group on the Danziger Bridge that morning went through a similar ordeal.

According to the police account, six other individuals ran up the bridge, jumped behind a low concrete barrier onto a walkway, and fired at officers.

Police say that group was the Bartholomew family: Leonard Sr., a longtime employee of the New Orleans Sewerage and Water Board; his wife, Susan; their teenage son and daughter; their nephew; and his friend.

The family contends that they were unarmed, and that they had been stranded by the storm and were walking to a Winn-Dixie supermarket for supplies.

Her statement echoes Lance Madison's -- that officers opened fire without warning. Five out of six people in her group were hit. Terrified, Bartholomew says, they took cover behind the concrete barrier on the side of the bridge.

"When I look, we're all on the ground and all you can see is blood. Everywhere. You can hear everybody hollering, moaning, everybody been shot and in pain," Bartholomew says.

"My right arm was on the ground lying next to me," she recalls. "The only thing that was attached to it was a piece of skin. It had been shot off."

The interview with Bartholomew took place in a Texas city she asked not be named, because she fears retaliation. The slight woman, who wore a crucifix around her neck, had a gray sweater draped over the stump of her right arm.

She says that after the gunfire, officers ran onto the bridge, pointed weapons at them, and told them not to look up. But she says she clearly saw blue shirts emblazoned with "NOPD."

Holmes says a bullet struck him in the right arm, shattering his bone. As he cowered behind the low concrete wall, he says a police officer walked over to him.

"He leaned over the cement block, he put the rifle to my stomach and shot me twice. They left, and about a minute later, an ambulance came and picked us up," Holmes says in an interview at a house in Atlanta, where he's staying temporarily.

Hospital and paramedic records confirm that Holmes had four gunshot wounds, including two to his abdomen. He now wears a colostomy bag and has limited use of his right hand.

Police say they shot and killed another member of that group. The Bartholomew family says it was Holmes' friend, James Barset, a 19-year-old high school senior from New Orleans' Ninth Ward.

"I'm sure if they got any kind of a heart, that they realize that what they did was wrong. And it's something they can't call back. And lives are changed as a result. My arm is missing, and I have to live with this, and I can't help but see it every day," Bartholomew says.

"Only thing I can do is try to forgive these people and move on. And that's what I've been trying to do," she says.

Fact-checking the police report reveals that critical information is wrong:

-- First, there were never two officers down at the scene, the cause of the original call.

-- Second, the main complainant is a man named David Ryder who was posing that day as a St. Landry Parish deputy sheriff. He is the person who identified Lance Madison as a shooter. But Ryder isn't an officer; he's a private citizen from Opelousas, La., who drove to New Orleans after Katrina to help out with rescues.

-- Finally, records show that Ronald Madison, who was mentally retarded since birth, was shot seven times, not once, as the police say.

Police Superintendent Warren Riley, through his spokesman, declined repeated requests for an interview. His office referred questions to the Orleans Parish District Attorney, which is investigating the incident.

"Anytime there's a shooting involving law-enforcement officials actually involving a death in this instance, it's something that's very serious, and we want to determine if there is any criminal conduct involved," says District Attorney Eddie Jordan.

Police, 'Overwhelmed' by Katrina, Under Investigation

The Danziger Bridge incident needs to be understood in the context of a major American city that had disintegrated.

"Radio communication was at a minimum. [The police] felt isolated, abandoned. They had no place to live or sleep. Rumors were just wild. Sniper fire, armed individuals on the street. And in some cases, that information was true," Radosti says.

An Arkansas paramedic who rode to the Danziger Bridge with police that morning told NPR that officers were involved in a five-minute gunbattle. He heard people shooting back, but he says he was hiding and he couldn't see who they were.

Radosti sympathizes with embattled officers who were trying to take back their city -- up to a point.

"But aggressive law enforcement has to come with common sense. If the officers there acted with good faith, the grand jury is going to exonerate them. But if the officers acted in bad faith, playing cowboys, that has to be seriously looked at," he says.

The district attorney has not indicated whether he will prosecute Lance Madison. Jose Holmes was never arrested, even though police said he was a shooter.

Meanwhile, attorneys for Madison, Holmes and the Bartholomew family last month filed federal civil-rights lawsuits against the city regarding the Danziger Bridge incident.