Accessibility links
Growing Tupac's Legacy, 10 Years After His Death Ten years ago Wednesday, the rap-music world lost one of its most revered and controversial icons — Tupac Shakur. The musician's mother, a former Black Panther activist, has launched a number of charities in her son's name. 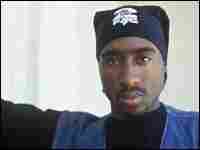 The complex musician was known for his "gangsta" rhymes, but he also tackled more personal subjects:

'Keep Your Head Up'

'Brenda's Got a Baby'

Ten years ago on Wednesday, the rap music world lost one of its most revered and controversial icons — Tupac Shakur.

Shakur was gunned down in a drive-by shooting in Las Vegas, as he sat in the car of music mogul Suge Knight. Shakur was placed on life support but died six days later, on Sept. 13th, 1996. His murder remains unsolved.

Many considered Shakur a lyrical genius, and also a promising actor. But others saw the late rapper as a troubled young man who fell victim to his own so-called "gangsta" image.

Shakur's reality was a little more complex — his tough-guy public persona was sometimes in stark contrast to some of his most uplifting songs about pride and responsibility.

Since Shakur's death, his mother Afeni Shakur — a former Black Panther activist — has taken control of the release of his archived songs. She has also launched a number of charities in her son's honor, including the Tupac Amaru Shakur Foundation for the Arts, based in Georgia.