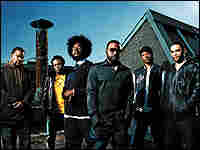 The Roots' members have earned a lofty reputation in hip-hop and beyond by reinventing the genre's boundaries. Incorporating live instrumentation and thought-provoking lyrics, the Philadelphia band expertly blurs the lines separating artistic integrity and commercial acceptance. The new Game Theory represents another classic Roots record, with a conciseness not heard on previous albums; it's also staunchly political in tone, matching the seriousness of the times.

In 1991, the group began to take shape after years of collaboration between primary founders ?uestlove and Black Thought. The Roots' major-label debut, 1995's Do You Want More?!!!??! flew in the face of hip-hop's reliance on samples, and its live-band approach immediately set it apart. Four years later, Things Fall Apart was a massive critical and commercial breakthrough. Though the group's membership has fluctuated often since its inception, The Roots' core vision has remained consistent, continuing to earn the respect of the genre's superstars and underground alike.