Accessibility links
Chi Runners Poised for Softer Landings Putting one foot in front of the other comes easily. But saving your joints from hard landings is another matter. A new technique, using the principles of t'ai chi, may help some runners save their joints. 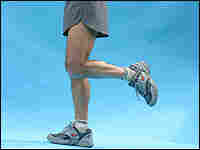 The one-legged posture is the basis for chi running technique. The leg in the air should be relaxed from the knee down, with toe dropped. Lori Cheung hide caption

Your Questions on Running

Arthritis, bunions, knee pain and shin splints; it's a pernicious group of injuries that frequently conspires to keep runners off the road.

Dr. Mark Cucuzzella and Danny Dreyer, founder of the ChiRunning method, answer your questions about how to make running work for you. 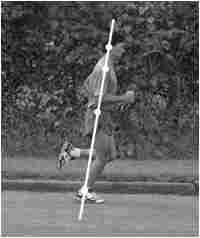 Danny Dreyer demonstrates the alignment for his chi running technique: the back is straight, lower abdominals are slightly crunched, which helps keep the pelvis level, and the upper body is slightly forward. The idea is that every time your foot hits the ground, your shoulder, hip bones and ankle should be in a straight line. That way, your weight is supported by your frame, not your muscles. Lori Cheung hide caption

Putting one foot in front of the other comes easily. But, with a new focus on technique, many runners are trying to fine-tune their form for softer landings.

Longtime runner and physician Mark Cucuzzella has focused on improving his technique to prevent injury. After he was diagnosed with arthritis in his toe joint, several specialists advised him to give up running. But Cucuzzella was determined not to quit.

"I had my feet repaired, and I had to try to learn more low-impact techniques so I didn't damage the joint more," Cucuzzella says.

Cucuzzella, who practices family medicine in Harpers Ferry, W.Va., began researching the technique of running. He read the medical literature as well as advice offered in popular running publications. He also began observing elite racers. He noted precise details of their body mechanics, such as exactly where and how their feet landed.

If you watch world-class runners, says Cucuzzella, "They're landing right under their center of body mass. They're lifting their legs, not pushing off."

As Cucuzzella played around with ways to emulate what he observed, he found a technique called "chi running," a form of running influenced by t'ai chi.

"T'ai chi is all about aligning your body and keeping it aligned for efficiency," says Danny Dreyer, who invented the technique and is the founder of the North Carolina-based company Chi Running. During daylong seminars, Dreyer teaches runners how to relax their bodies so they don't have to use as much muscle power.

"I'm basically showing runners how not to use their muscles," Dreyer says.

During a recent seminar in Bethesda, Md., Dreyer worked with about 60 middle-aged runners. He teaches them a one-legged posture stance, which is the foundation of his method and helps to align the body correctly. As the group slowly jogged, Dreyer tells them to focus on picking up one leg at a time.

"Every time your heel comes off the ground, your toe just drops," Dreyer shouts as the participants run around a track. He instructs them to dangle their lower legs and allow their shins, ankles and toes to relax.

During the seminar, Dreyer tells runners that posture is key. He instructs runners to keep a straight upper body and a "crunch" going in their lower abdominal muscles. Contracting the abdominal muscles levels the pelvis, which helps build strong core muscles. It brings runners' focus to their center, says Dreyer. In chi running, as in t'ai chi, Dreyer says the "center" is where true power lies.

Cucuzzella says the method makes him feel lighter as he runs.

"I'm just lifting my legs," he says. "I've got nothing going on underneath my knees other than they're there to make me land."

Cucuzzella didn't master the technique overnight. He's been working with videos, books and instruction for a couple years.

He says his experience in the Boston Marathon last year assured him that the technique has helped him improve his form.

The race is all downhill, with some muscles doing overtime as brakes. For weeks after, he would be sore.

But last fall, using his new technique, Cucuzzella says the race seemed kinder to his body. The day after the race, it felt as if he'd just taken a weekend run.

Cucuzzella is looking for evidence that there's something about the body mechanics of the chi running technique that he could teach his patients. He's working with researchers at George Washington University who hope to try to measure the impact forces and injury rates of runners who try the method.