Accessibility links
Disabled Activists Win Battle for Independent Care Earlier this summer, federal officials announced they will provide two billion dollars to states that help people leave nursing homes -- instead of paying for them to live in one. That plan was the result of an unlikely alliance between severely disabled activists and a White House official.

Earlier this summer, federal officials announced what they call the boldest change in the way the government pays for long-term care since the invention of Medicare and Medicaid. Washington will now provide $2 billion to states that help people leave a nursing home - instead of paying for them to live in one.

That decision came because of a highly unlikely alliance between a group of disabled activists in wheelchairs who came to Washington trying to get themselves arrested at the White House gates -- and the Bush administration aide who ended up listening to them.

The momentum for change began four year years ago when about 200 demonstrators in wheelchairs rolled into the intersection closest to the White House and shut down all traffic.

"It was really quite a scene," says Bob Kafka, a leader of the group American Disabled for Attendant Programs Today (ADAPT). "It was thundering and lightning. It was sporadically raining."

ADAPT uses non- violent direct action tactics to enact policy changes for disabled individuals. Many of the ADAPT protestors are severely disabled and require the help of an attendant to move.

Still, the protestors travel around the country and practice civil disobedience. They want people with disabilities to get out of nursing homes and for the government to pay for personal care attendants. Getting an attendant for a few hours a day makes the difference between whether they can live in their own homes or end up moving into a nursing home.

Four years ago, the protestors tied up traffic for three hours in front of the White House and the police were getting ready to make arrests when a White House aide got an urgent phone call.

"I was working in my office on probably about 15 other issues," says Mark McClellan, who was at the time a member of the President's Council of Economic Advisors. "I got a call from the chief of staff of the White House, saying, 'Mark, there are some people outside who are blocking traffic at the intersection of 17th and Pennsylvania. It's coming up on rush hour. Go fix it.'"

McClellan went outside, where he met the demonstrators and Bob Kafka in the middle of the intersection. His clothes and young looks contrasted with Kafka's long gray hair and wild beard. The two men could not be more different in terms of political beliefs or style. But on that rainy day outside the White House, they found things in common.

The Administrator and the Activist

Both Kafka and McClellan are fascinated by the policy details of how the government cares for the elderly and disabled. Both also believe that individuals often make the best choices about their own care. 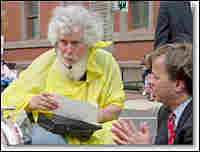 Mark McClellan, the head of the agency which runs Medicare and Medicaid, negotiates with Bob Kafka, an ADAPT activist, outside the White House ADAPT hide caption

McClellan practiced medicine before joining the Bush administration. "Many of my patients had disabilities and chronic illnesses," he says. "And in those experiences, there were so many cases if you just listen to the patient -- if you could get the patient involved in deciding what treatments were best for them -- you could get the better results."

After President Bush appointed McClellan the head of the agency that runs Medicare and Medicaid, he met with Kafka and other ADAPT members four times a year.

Earlier this year, the White House proposed legislation to start a program called Money Follows the Person, which gives states extra money to move elderly and disabled people out of nursing homes and into their own residences. Congress alotted $2 billion over the next five years for the program -- still just a tiny portion of what Medicaid spends on nursing homes.

Bob Kafka says it's enough to move at least 100,000 people. "Mr. McClellan has made us a believer in bureaucrats," he says, "That they can keep their word and follow through."

Though some disability and health advocates object to other parts of the Medicaid reform law -- specifically the part which allows states to change benefits and charge co-payments -- McClellan says those objections miss the historic significance of the new long-term care policy.

"This is the biggest change in long-term financing in decades," he says.

McClellan recently announced his resignation. Though he'll be most remembered for setting up the new Medicare drug benefit, he says one of his proudest accomplishments was his work with ADAPT.

Adapt and Move On

For Bob Kafka, the work isn't over. He was back in Washington this week, where several hundred ADAPT protestors surprised a few security guards at the side entrance of a downtown hotel, where a trade organization for managed care companies was having their legislative conference.

The protestors in wheelchairs and scooters rushed into the ornate hotel lobby and took it over. "We as people with disabilities want the managed care community to understand that we want to live on our own," says Kafka.

The ADAPT demonstrators held the hotel lobby for two hours and got their meeting with the managed care officials.

But Kafka has one other meeting before he leaves Washington. Today, he and other ADAPT leaders will meet with Mark McClellan to talk about how the new federal program is progressing.

They will take about how McClellan's agency just started taking applications for grants two weeks ago. Thirty states have recently told McClellan that they want to take part in the new program to help elderly and disabled people move out of nursing homes.

The Humiliation of a Shower

Nelson Peet was 48 years old when he ended up in a Texas nursing home. And he says he feared he would never get out.

Nelson Peet speaks of his difficulties taking a shower 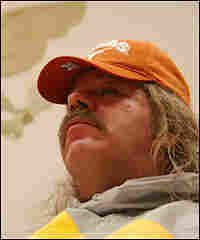 Nelson Peet spent 16 months in a nursing home before members of ADAPT helped get him out. Tim Wheat hide caption

It had been years earlier, when he was a young man, that Peet became paralyzed, the result of a motorcycle accident. He lived on his own--with help from family and friends--until he developed bed sores in 2004. He went to a hospital and then to the nursing home. That facility helped him get better. But he says he was miserable there. He says he was stripped of basic control over his life. Aides decided when he ate or went to sleep. He shared a room with strangers. "There is no privacy," says Peet of living in a nursing home. "The best chance you have of getting privacy is to close your eyes and go to sleep."

Peet spent long, lonely days. Often he'd spend days--no matter what the weather--on the smoking patio. "Being in a nursing home, I've got to tell you, was like being in the stockyards," says Peet. "Everybody eats at the same time. What does everybody do in the nursing home? Eat. Drink. Sleep. Watch TV. Maybe a half hour a day, they might have some little activity like Bingo, once a week. Or arts and crafts. Maybe a birthday party once a month for everybody in the whole month."

Members of ADAPT of Texas found Peet in the nursing home and helped him get out. They used a national demonstration program that had been set up with funding from Medicaid. The Texas Money Follows the person program allowed someone in a nursing home to use Medicaid funding to, instead, live in a house or apartment. In the first two and a half years of the program, nearly 11,000 people had moved out of nursing homes. They included the very young to the very old, including many over the age of 90. According to federal Medicaid officials, the in-home services cost Texas about 20 percent less than the institutional care. That led the Bush Administration and Congress to start a similar program that will be open to all states and last for five years.

Peet spent sixteen months in a nursing home. He got out on June 1. This week, Peet joined a couple hundred other ADAPT members in Washington, D.C. to demand more support to get others out of nursing homes. Peet and other ADAPT members took over the lobby of a downtown hotel where a national trade association of managed care providers was meeting. ADAPT members wanted a meeting with managed care officials, and got it. In the hotel lobby, Peet held a sign that said "Let Us Manage Our Care." He's a large man, with long hair and a thick moustache. He was wearing a rain poncho with an ADAPT sticker that said "Free Our People". And an orange Texas Longhorns hat.

Nelson Peet described some of the miseries living in a nursing home. And of the time he waited ten days to get a shower