Accessibility links
Earliest New World Writing Discovered A heap of debris taken from a quarry in Mexico has yielded a stone block inscribed with what appears to be the oldest writing ever found in the Americas. Experts say symbols are nearly 3,000 years old and was created by the Olmec civilization. At left, a recreation of the symbols. 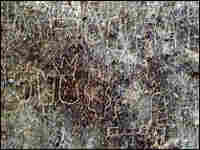 Front view of a stone block recently discovered in Veracruz, Mexico. It's inscribed with 28 different signs, some of them repeated. Science hide caption 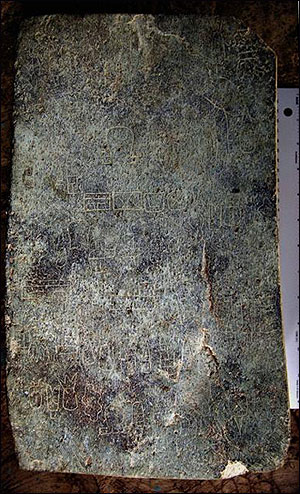 Front view of a stone block recently discovered in Veracruz, Mexico. It's inscribed with 28 different signs, some of them repeated. 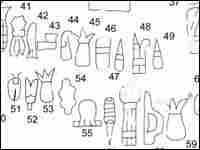 A recreation of the symbols and their placement on the Veracruz stone block. Science hide caption 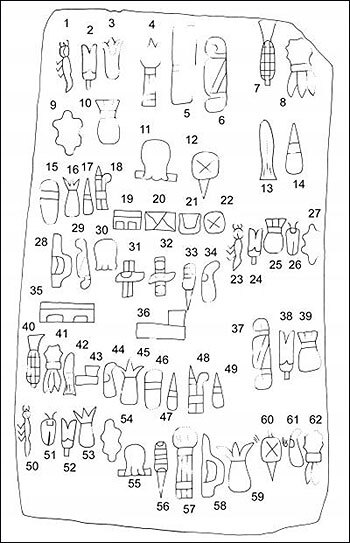 A recreation of the symbols and their placement on the Veracruz stone block. 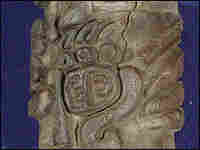 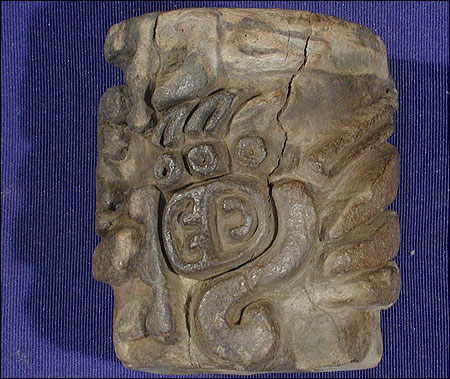 A previously discovered cylinder seal from San Andres, Tabasco, Mexico, showing glyphs also created by the Olmec civilization. The writings are estimated to date from 650 B.C.

A heap of debris taken from a quarry in Veracruz, Mexico has yielded a stone block inscribed with what appears to be the oldest writing ever found in the Americas. Numerous symbols are carved across the block in rows. Experts say the block dates back almost 3,000 years, and was created by people from the Olmec civilization. The Olmec were an early central American people who rose to prominence before the heyday of the Maya.

It is a once-in-a-lifetime discovery, says Stephen Houston, an archeologist at Brown University.

The inscriptions are hieroglyphics -- 62 small drawings in rows, with some of the signs repeated up to four times.

"It's not just a set of symbols that might be placed together the way you might see, let's say, on medieval French or English painting," Houston says. "Rather, they are arranged in a sequence that is meant to reflect a language with grammatical elements and with a word order that makes sense."

There are 28 different glyphs -- as archeologists call the signs for short. Some look like vegetables. One looks like a sharp awl or pick. Some symbols are repeated, such as a symbol that looks like an insect. Houston suspects that one symbol might be some sort of punctuation. Some sequences of symbols are separated from the rest, in what look like poetic couplets.

Not all of these symbols are unfamiliar to archeologists. Mary Pohl at Florida State University is an expert on the Olmec. She's analyzed Olmec symbols on jewelry and a cylindrical seal that dates almost as far back as the inscribed tablet. She says a few of the symbols are clearly written versions of carved stone objects, like an ear of corn, previously found at Olmec archeological sites.

"One sign looks actually like a corn cob with silk coming out the top," Pohl says. Other signs are unique, she says, and never before seen, like one of an insect.

Pohl says these objects -- and thus probably the writing -- had a special value in rituals.

"We see that the writing is very closely connected with ritual and the early religious beliefs, because they are taking the ritual carvings and putting them into glyphs and making writing out of them," Pohl says. "And all of this is occurring in the context of the emergence of early kings and the development of a centralized power and stratified society."

The tablet and inscriptions are described in the journal Science. Its date is based on other artifacts found nearby, and may need further confirmation.

Houston and scientists from Mexico who first identified the text say they have no idea what it actually says. With no previous text to work from, deciphering it will be difficult.

What's needed are more texts for comparison. Archeologists say there are a lot of Olmec sites in Mexico that are still unexplored, and any one could hold the key to reading the oldest known language in the Americas.

More on the Olmec Writing Discovery at Brown University