Accessibility links
Documentaries View the Iraq War from Two Sides Two new documentaries are out about the Iraq war: The Ground Truth and My Country, My Country. My Country shows what the war has been like for Iraqis, while Ground Truth concentrates on the personal traumas U.S. soldiers have to deal with when they return home. Both movies offer compelling views of the costs of war.

Two new documentaries are out about the Iraq war: The Ground Truth and My Country, My Country. My Country shows what the war has been like for Iraqis, while Ground Truth concentrates on the personal traumas U.S. soldiers have to deal with when they return home. Both movies offer compelling views of the costs of war. 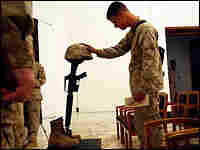 U.S. Marines pay their final respects to a fallen friend during a memorial service featured in 'The Ground Truth.' Focus Features hide caption

For those who are interested in the Iraq war, two documentaries are examining the consequences of the war the most personal level.

KENNETH TURAN: The endless war in Iraq has called forth a compelling series of documentaries. They tell us what is going on in that agonized country with more depth and immediacy then any other medium has managed.

Two new films, My County, My Country, directed by Laura Poitras, and The Ground Truth, directed by Patricia Foulkrod, show the two main categories of Iraq docs. My Country shows what the war has been like for the Iraqis, while Ground Truth concentrates with equal heartbreak on the personal traumas U.S. soldiers have to deal with when they return home.

My Country's director worked alone in Iraq for more than eight months, getting close enough to the people to show us what it really means to be a civilian in a war zone. She spent the time with the family of Dr. Riyadh, a committed physician who runs a clinic in a Sunni neighborhood of Baghdad. Dr. Riyadh is a deeply religious man, and a strong believer in democracy. He should be positive about the U.S. But what we hear is how angry and frustrated he is about the American occupation.

Dr. RIYADH (Physician in Iraq): What is the misunderstanding point that lead to this aggression of a city? It is a process of (Unintelligible). The war had been over since last May, but it seems to be continuous.

TURAN: My Country, My Country, shows us that while both the Americans and the Iraqis care about the country's future, their differing worldviews make them alien to each other. We see that U.S. soldiers, though they are trying to help, inevitably come off as intrusive and arrogant, a combination no Iraqi likes.

Some of the same feeling comes through from the U.S. soldiers' point of view in The Ground Truth. As one returning veteran says, occupation is a situation of dominance. It's the day-to-day reality of behaving abusively. Killing is just the icing on the cake.

The Ground Truth is a thoughtful, emotionally wrenching film that could have been made after any war. It uses extensive interviews with disaffected veterans angry about what they've experienced in Iraq. It examines the reality society tries to ignore: what the military does is teach people to kill. How that's done and what happens to those trained killers when they attempt to reintegrate into society is handled with sensitivity and compassion.

TURAN: By the time The Ground Truth is over, no one will doubt the quotation that starts the film: the return from the killing field is more than a debriefing. It is a slow ascent from hell.

MONTAGNE: The movies are, My Country, My Country, and The Ground Truth, two documentaries about the war in Iraq.

Kenneth Turan is the movie critic for MORNING EDITION and the Los Angeles Times.