Accessibility links
WHO Backs Use of DDT Against Malaria The World Health Organization today announced a major policy change. It's actively backing the controversial pesticide DDT as a way to control malaria. Malaria kills about 1 million people a year, mainly children, despite a decades-long effort to eradicate it.

Listen
WHO Backs Use of DDT Against Malaria 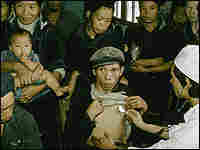 Villagers wait for care at an antimalaria health center in the Bao Thang district of Vietnam. Olivier Martel/Corbis hide caption

In a 1963 broadcast, biologist Rachel Carson talks about the dangers of DDT.

The World Health Organization today announced a major policy change. It's actively backing the controversial pesticide DDT as a way to control malaria. Malaria kills about 1 million people a year, mainly children, and mainly in Africa, despite a decades-long effort to eradicate it.

The WHO previously approved DDT for dealing with malaria, but didn't actively support it. While DDT repels or kills mosquitoes that carry the malaria parasite, it doesn't get much good press. In 1962, environmentalist Rachel Carson wrote a book, Silent Spring, about how it persists in the environment and affects not just insects but the whole food chain.

As activist Malvina Reynolds once sang, "It kills the bugs in the apple tree, I eat the pie and it's killing me. DDT on my brain, on my brain."

In the early 1960s, several developing countries had nearly wiped out malaria. After they stopped using DDT, malaria came raging back and other control methods have had only modest success.

Which is why Arata Kochi, head of the WHO's antimalaria campaign, has made the move to bring back DDT. His major effort at a news conference Friday in Washington, D.C., was not so much to announce the change, but to deflect potential opposition from environmental groups.

"We are asking these environmental groups to join the fight to save the lives of babies in Africa," Kochi said. "This is our call to them."

A number of major environmental groups support the limited use of DDT, such as spraying only inside of houses and huts once or twice a year. That type of use is supported by the Sierra Club and Environmental Defense, which was originally founded by scientists concerned about DDT. The limited application is also part of President Bush's new malaria initiative.

But some environmental groups say spraying DDT will be harmful. Jay Feldman, executive director of a group called Beyond Pesticides, says using it is a war plan without an exit strategy.

"WHO holds a lot of clout in the world health community and the fact that they're now changing policy and advocating use of DDT will have dramatic impact," Feldman says. "They announced today that they expect 85 percent receptivity, that is knocking on people's doors and convincing them -- that's their language -- to use DDT."

Looking at the medical literature, he predicts harmful effects.

"This is a chemical that has been studied and evaluated," Feldman says, "and over the years has been found to cause cancer, endocrine disruption, adversely affect the immune system and is very problematic from the standpoint that it is persistent." DDT collects "in fatty tissue and in the environment," he adds, and can also be passed on in breast milk.

But supporters of the new policy discount those studies and point to others showing it's safe. Richard Tren, member of a group called Africa Fighting Malaria, says that while there may be lab studies showing DDT could potentially cause cancer, no large studies show an actual increase in cancer in people.

Some opponents say DDT will be diverted to more direct and more harmful agricultural use. Tren has watched indoor-spraying campaigns in Zambia.

The field of malaria control has historically been dogged by problems with resistance. Each time scientists find a way to fight the parasite, the parasite finds a way to fight back. It has become resistant to most treatments, for example. And some mosquitoes have already adapted to tolerate DDT. The WHO's Kochi says resistance can be limited if DDT is used carefully, and only where it's likely to be effective.