Accessibility links
Swedish Pop at Its Wistful, Whimsical Best A highlight of Peter, Bjorn and John's forthcoming Writer's Block — a concept album about the trials and tribulations of relationships — "Young Folks" is a breezy, melancholic slice of infectious pop. 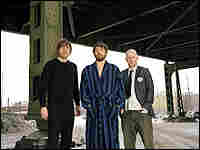 Not that long ago, the mere mention of Swedish pop music would conjure up images of over-produced bands like Ace of Base, Roxette and, at best, ABBA. Since the '90s, however, the independent music scene in Sweden has produced the exceptional likes of The Cardigans, The Soundtrack of Our Lives, Acid House Kings, I'm From Barcelona and Peter, Bjorn and John.

With just a funky bass line, a drum beat, some bongos, shadowy keyboards and a whistle-riff as memorable as the one in Otis Redding's "(Sittin' On) The Dock of the Bay," the Stockholm-based trio of Peter, Bjorn and John has fashioned a whimsical and lovable song in "Young Folks." A highlight of the new Writer's Block — a concept album about the trials and tribulations of relationships — it's a wistful, melancholic slice of infectious pop.

"Young Folks" features Victoria Bergsman of The Concretes in a guest vocal, with Peter singing about the early stages in a new romance when nervousness and tentativeness sets in: "If you knew my story word for word, had all of my history / would you go along with someone like me?" It's an exquisite moment of pop bliss, impeccably constructed for the exact moment when love starts to get complicated.