Accessibility links
Economy, Politics Collide in a Divided Mexico July's presidential election left the nation almost equally divided between a leftist who wants to renegotiate NAFTA to protect farmers, and a conservative who wants to encourage more free trade deals. But treaties alone aren't the only source of Mexico's economic woes. 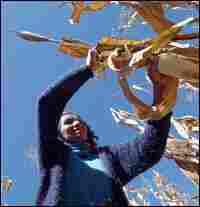 Cleotilde Jimenez Santiago, 57, reaches for a cornstalk in her field beside her home in Oaxaca, the region of Mexico where cultivation of corn is believed to have first originated. At least 30 percent of farming jobs have disappeared due to competition with U.S. farmers. Lynsey Addario/Corbis hide caption 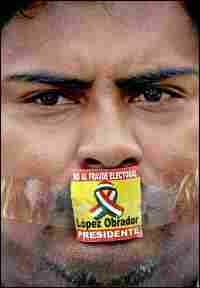 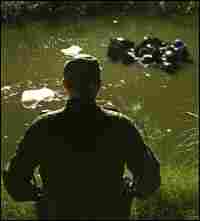 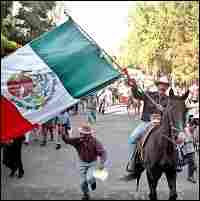 A farmer rides his horse on the grounds of the Chamber of Deputies in Mexico City to protest NAFTA, which many farmers say forces them to unfairly compete with subsidized American farmers. Miguel Castillo/AFP/Getty Images hide caption 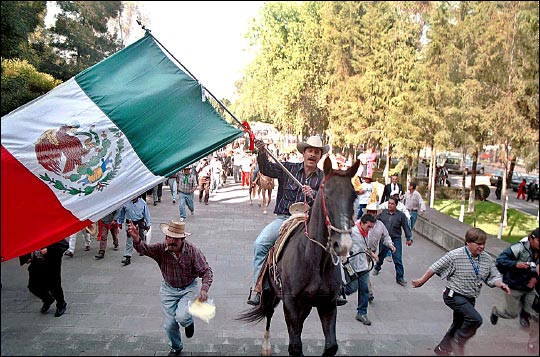 A farmer rides his horse on the grounds of the Chamber of Deputies in Mexico City to protest NAFTA, which many farmers say forces them to unfairly compete with subsidized American farmers.

Mexico has been in political crisis since the July 2 presidential elections, with two candidates from opposing sides of the political spectrum claiming victory. And what's happening in Mexico is an extreme example of a trend across Latin America, highlighted by close elections in Honduras and Peru.

Free-trade agreements are among the issues dividing the electorate, and the biggest of these -- the North America Free Trade Agreement (NAFTA) -- is the source of much of the divide in Mexico.

Judging by the results of the election, Mexico is almost equally divided between leftist Andres Manuel Lopez Obrador and conservative Felipe Calderon. Recent court rulings have upheld Calderon's victory amid charges of electoral fraud, but the streets and plazas of the capital have been clogged with Lopez Obrador's supporters, who vowed to set up their own government. (Those demonstrators announced Friday that they would end their sit-in protest.)

Demonstrator Miguel Angel Vega says there is mounting genuine frustration in Latin America with the way things have been going.

"We can't take anymore," he says. "Every day there are more poor [and] it's harder for us in our work to get well paid."

In the past decade, economic growth in Mexico has been pretty much flat. Illegal immigration has soared, despite the touted benefits of NAFTA, which set up preferential trade quotas between the United States, Mexico and Canada.

One of the main issues for many Mexicans is corn. The grain has been staple of the Mexican diet for thousands of years, but because of NAFTA, more efficient U.S. farms are flooding the Mexican market with cheaper varieties. The United States is the largest producer of corn in the world, and farmers also benefit from U.S. government subsidies that make it almost impossible for Mexican farmers to compete.

The corn crisis has devastated many parts of the Mexican countryside, causing immigration north to America to accelerate. There has been a mass exodus from farming states such as Chiapas, where previously there had been very little migration.

Around 30 percent of farming jobs have been lost across Mexico, and low paying maquiladora manufacturing jobs -- another legacy of NAFTA -- have done little to pick up the slack.

"Clearly the results are not good" when analyzing NAFTA's effect on Mexico's economy, says Mark Weisbrot, co-director for the Washington-based Center for Policy and Economic Research. "It's really nothing that anyone could point to as an economic success."

Weisbrot argues that most free-trade agreements have done more harm than good across the region.

"There has been a huge long-term growth failure in Latin America over the last 25 years," he says. "It's the worst economic growth performance that they've had in over a century. That's why people are questioning not just these commercial agreements, but also the whole set of economic reforms that have been implemented this last quarter century."

During his presidential campaign, Lopez Obrador said he would renegotiate NAFTA to protect Mexico's corn and bean farmers. Calderon took the opposite tack, campaigning on a platform of opening Mexico's markets even further, saying they boost international investment and create jobs.

Even free trade's fiercest critics do not say the agreements are solely to blame for Mexico's flagging economy. Bad economic and monetary policies, lack of investment in key sectors and simple bad governance are also factors.

"The easiest target to shoot at is trade agreements," says Eric Farnsworth of the Council of the Americas, a group that advocates free trade. "Some of the least-developed countries in Latin America don't have trade agreements with the United States. It's one way for populist leaders to throw off some steam by having an external bogeyman."

In most Latin American countries, at least 50 percent of the population lives in some degree of poverty. The region had a growth rate higher than 80 percent between 1960 and 1980. And in a year which has seen more than a dozen elections across Latin America, politics and economics inevitably collide.