Accessibility links
Exiting Iraq: Gen. William Odom's View Lt. Gen. William E. Odom, U.S. Army (Ret.) -- former director of the National Security Agency -- says it's dangerous to build an Iraqi army until there's a stable government. And he warns that Iraq will make its decisions "with a gun, not a vote."

Lt. Gen. William E. Odom, U.S. Army (Ret.) — former director of the National Security Agency — says it's dangerous to build an Iraqi army until there's a stable government. And he warns that Iraq will make its decisions "with a gun, not a vote." 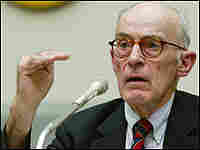 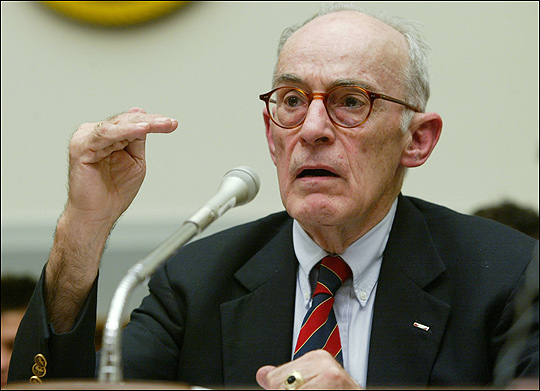 U.N. Secretary-General Kofi Annan returned this week from a series of visits with Middle East leaders and said that most of them believe that the war in Iraq, quote, "has destabilized the region." But he also said - another quote - "many felt the Americans, having created the problem, cannot walk away."

Retired General William Odom was director of the National Security Agency under President Reagan and is now a senior fellow at the Hudson Institute. He has been one of the most outspoken voices on how and when he believes the United States should leave Iraq.

He joins us for another in our series of conversations with different perspectives on when U.S. can leave Iraq. General Odom, thanks very much for being with us.

SIMON: And you have said U.S. troops just ought to withdraw as soon as possible.

Gen. ODOM: We should get out, carefully, over a period of three or four, five or six months. But the main reason to get out is that we are now diplomatically and strategically paralyzed by being tied down there. We've alienated too many of our close allies in Europe and in other parts of the world. We're looked at as terribly biased and not to be trusted in the Mideast peace process.

By getting into Iraq we've flamed the entire region. Therefore we have to have a strategy for limiting the damage and bringing some kind of order over the region, from the Eastern Mediterranean through Afghanistan. We can't do that alone. We need allies.

And we will only have the kind of allies we really need to do that, and the support of the United Nations, after we've withdrawn. There will be a lot of disorder, and we just have to let it settle out.

SIMON: Stated very plainly, I think what you're saying is there is a lot more dying to be done in sectarian violence.

Gen. ODOM: Absolutely. There will be sectarian violence and we'll just have to live with that.

SIMON: The Iraqis have to live with sectarian violence under your proposition. Not us.

Gen. ODOM: Well, we might have to live with the guilty feelings for having been a perpetrator of it.

SIMON: A perpetrator of sectarian violence or an enabler?

Gen. ODOM: Oh, I think that going in there did exactly that. The only reason you didn't have that before was that Saddam ruled with an iron hand. As bad as Saddam was, he kept stability in that country, which otherwise would've been very unstable. The Kurds would've been out of there in no time at all. So would the Shiites.

You'd have had this breakup had Saddam fallen in 1991. And then what would we have done? Well, we would just sit back and watch the sectarian violence from without. That, I think, would've been a better situation for us to be in.

We now have unleashed forces that are not going to be put back under some kind of stability control for quite some time. What we may be able to do is keep it from spreading into the rest of the region, and we may be able to do a number of things to moderate it. I think negotiations of certain sorts and some wisdom on our part in dealing with Iran could keep Iran from spurring it as much as they probably will if we don't.

Gen. ODOM: I don't see you can do anything about it without taking sides. If you take sides, you make it worse. This one of those situations where you've lost money in the market (unintelligible) you can't get it back by putting more money in.

And I lived through this in Vietnam. We ended up withdrawing, talking about we had a secret plan for victory; this, that and the other. This was cosmetic cover. And we may need that in this particular situation. Now, I've been saying this for two or three years, and every time I'm told, oh, we can't let this sectarian violence go on. Well, we've been there and the sectarian violence has grown.

SIMON: Let me ask you about what some people fear would be the feeling that a precipitous withdrawal, the withdrawal even over six months to a year, would send a message to potential adversaries that the United States lacks the stomach for a long-range commitment.

Gen. ODOM: It's not a stomach to stay - a long commitment. It's the wisdom not to continue to allow your enemies to bleed you. By going in we have so enhanced Iranian power in the region, it's hard to exaggerate. One of the big losers in a quick U.S. withdrawal will be al-Qaida. Al-Qaida is able to be there only because we're there. They can't operate in Kurdistan now. The Shiites have no use for them whatsoever. The Sunnis only tolerate them for tactical convenience in the insurgency.

You know, one of the great gainers in our invasion was Osama bin Laden, because he was not able to use this area at all until we opened it up and made it safe for them. He did not realize a real surge in recruitment and ideological excitement until we invaded Iraq.

SIMON: What about the prospect of the division of the country?

Gen. ODOM: It's entirely possible. A problem I think we will have to deal with is how you tell Kurds, who are somewhere between 20 and 40 million in number, that they shouldn't have a national territory. This threatens the very territorial existence of Turkey. It would be very upsetting to Iran, which has a large Kurdish minority. And obviously it would fracture Iraq, and it could take off a piece of Syria. Now, that might happen eventually, but because we went into Iraq we'll be blamed for it.

SIMON: Does the U.S. have an interest in helping prepare the Iraqi army?

Gen. ODOM: We project this absolutely false image onto Iraq that is: it's the government versus the insurgents. It's factions in the government versus each other that prevents the political consolidation. Once the political consolidation is achieved, then building an army makes sense. If we're able to consolidate an army, what will it do? The leader will have its loyalty and they will throw out the government and we'll have a military dictatorship. And very likely you'll have a return of an individual not unlike Saddam.

I saw that in Vietnam. The problem was not training up the Vietnamese military. Many of those are very competent. They fought one day. They didn't fight the next. It depended on political context and whose ox was about to be gored for this.

I said before the Iraq war, if you go in - anybody who can rule that country after you've been there will have to be terribly anti-American. And he will likely have to depend on Islamic fundamentalism as his legitimacy card. And that will cause a civil war because you have two factions of Muslims there. So this was predictable, and that's what's happening there. And the politics is going to be who gets what, when and how in Iraq, and they'll decide that by the gun, not by the vote.

SIMON: Retired General and National Security Agency Director William Odom. Thank you very much for being with us.

William Odom at the Hudson Institute