Accessibility links
Do Movie Audiences Have a Tin Ear? What has become of the movie musical? The most recent attempt -- Idlewild from the rap group OutKast -- flopped at the box office. Entertainment critic Elvis Mitchell and Scott Simon ponder the status of films built around singing and dancing.

Listen
Do Movie Audiences Have a Tin Ear?

What has become of the movie musical? The most recent attempt — Idlewild from the rap group OutKast — flopped at the box office. Entertainment critic Elvis Mitchell and Scott Simon ponder the status of films built around singing and dancing. 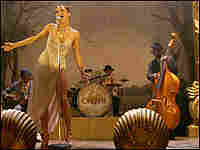 Whoever thought two guys named Big Boi and Andre 3000 would be the ones who tried to reinvent the movie musical? The two members of the rap group Outkast conceived and produced the new film Idlewild. It follows two childhood friends who clash with gangsters in 1930s Georgia and sing about it as they go along.

SIMON: Ah, the sounds of the 1930s. The filmmakers high hopes withstanding, Idlewild bombed at the box office. Some reviewers have called it a mess. Joining us now from New York to talk about the state of the movie musical is our own big boy, our entertainment critic Elvis Mitchell. Elvis, thanks for being with us.

ELVIS MITCHELL: Scott, as someone I know once said, y'all ain't listening to me, you just want to dance.

SIMON: This is a time when you would think, because of the popularity of music videos, musicals should be finding new audiences.

MITCHELL: It's interesting. I think one of the things that's probably helped to kill the movie musical is that even conventional drama has so much music in it now. There was a time that was a difference between the musical and a conventional movie, be it a comedy or a drama, whatever, is that those movies didn't have that many songs in them.

Now any movie has so many songs in it that in a way you're getting a lot of sort of the infectiousness, that kind of energy that sort of dazzles, that musicals offer, at least part of that, in almost any movie.

SIMON: But it's interesting, because Chicago won the Academy Award, and there were lots of predictions that its victory would reinvent the movie musical. And you've read about lots of plans in Variety for movie musicals. Now, we're talking about, obviously, an old Kander and Ebb/Bob Fosse show that was revitalized for the screen.

And in the cellblock tango, they really did try and use some of the language of contemporary music videos in a Fosse dance scene.

Unidentified Woman: I bet you would have done the same.

MITCHELL: That's a beautiful kick step you're doing, by the way, there, Scott.

SIMON: Thank you. Well, it equals anything Renee Zellweger was able to pull off in that film. But they had the advantage of artful cutting.

It occurs to me now what we are seeing increasingly in musicals are times when the narrative stops for what amounts to a montage that's set to music.

MITCHELL: Yeah. I mean, but that is in almost every kind of movie now. I mean, any kind of romantic drama, there's a montage to three or four pop songs that are probably being played on either MTV or VH1 or BET, or all three simultaneously, that again, do that kind of work.

Because what we're talking about is that in those old musicals there was a subtext, which is to say that the act of sex couldn't be acted out literally on the screen. So those big dance numbers, that kind of physical intimacy between Ginger Rogers and Fred Astaire, represented that kind of sexual ardor that movies just couldn't express in the ways that are much more open to us in the last 30 or 40 years.

And what's missing from, I think, almost all these movies is that wonderful moment in the movie musical where everything was heightened just before they burst into song.

SIMON: What about some of the biopics? I'm thinking of Ray most specifically. I mean it wasn't a musical biopic, but it had just so much music.

MITCHELL: Ray is in effect a musical. It sort of takes that same kind of energy that we saw applied to the old school musicals and uses it in that film. You could say the same thing for Walk the Line or for 8 Mile.

SIMON: So if somebody wants to be the next Gene Kelly, there's just nowhere for them to go, is there?

MITCHELL: Well, I mean that's the big question, isn't it? I mean because I think somewhere there's going to be somebody who does that, and possibly it's going to be this generation who didn't grow up with musicals. That's why it's been so shrewd to sort of pitch musicals right at kids, because almost every animated film has a couple of big musical numbers in it. And what's going to happen - and I'm bracing myself for this - is some Brechtian take on Barney, the big purple dinosaur.

But I'm only half-kidding about that, because I think that's going to be the next thing. Because kids grew up with musicals and cartoons. I mean they grew up with stuff like The Little Mermaid, where there is nothing sublimated, where something is sung about that we've just heard someone talk about. And so to them it becomes kind of a continuum. I think the next really interesting musical director will take all these influences and use it in a way that sort speaks to what it's meant to him or her.

Elvis, thanks very much.