Accessibility links
Oboist Liang Wang: His Reeds Come First At 26, Liang Wang is new on the job as principal oboe with the New York Philharmonic. He makes his own reeds, spending hours each day hand-crafting the essential equipment with incredible precision. 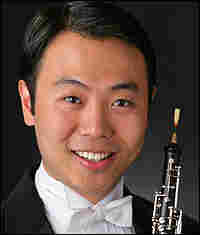 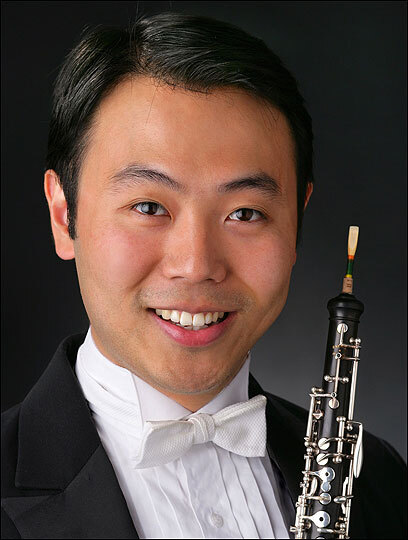 Liang Wang is the principal oboe for the New York Philharmonic.

At 26, Liang Wang is new on the job as principal oboe with the New York Philharmonic. The high-pressure post is made just that much more challenging by a detail of the work: Wang makes his own reeds, spending hours each day hand-crafting the essential equipment with incredible precision.

In fact, he spends about as much time making reeds each day as he does practicing and playing the instrument.

"That's why oboe players are so neurotic," he jokes.

Oboes are a double-reed instrument. The two reeds are tied together, and stick up from the top of the oboe. There's no mouthpiece, like you'd find on a clarinet or other single reed instruments.

In a visit to Wang's apartment, near Lincoln Center, he obligingly showed off a few tricks of the trade. The difference between a good reed and a bad one makes all the difference, he says:

"The oboe is a very piercing instrument... Our job as oboe players is to make it as warm and colorful as possible... you don't want someone using a needle, going at your ear."

The desk and bookshelves in Wang's apartment are scattered with tools, miniature versions of what you might find in a woodworking shop.

He starts with small, tubular sticks of cane he orders from France and China. They're like wine, he says; some vintages are better than others. He soaks a piece of the butter-colored cane in warm water. Once it softens, he splits in with a razor blade, trying to get three two-inch-long reed pieces from each tube of cane.

He thins the reed with gouging devices, making tiny shavings. Folded in half, the cane makes two perfectly matched reeds.

He uses colorful thread to tie the reeds onto what's called the stable, a metal tube on a cork base that fits into his oboe.

Then the real work begins. He refines the reed by hand, first on a shaping tool and finally, free-hand with a very sharp, bevelled knife. He may carve the reed a little thinner for Mozart, a little thicker for Mahler.

He tosses out more reeds than he keeps. "Competition is always healthy," he notes wryly.

Getting that perfect reed is a quest that can last right up until a performance, with minor last-minute adjustments once he hears how the reed sounds in the hall.

Wang says he keeps some of his past handiwork in a case "full of reeds meaningful to me," including the reed he used for a successful audition with the Cincinnati Symphony and another with the San Francisco Ballet Orchestra. And, of course, the one he used for his final trial with the New York Philharmonic, decorated with pink and purple thread.

Those reeds aren't in use any more... except as a source of inspiration.

The audio for this story was produced by Alice Winkler.