Accessibility links
Researchers Still Learning from Romania's Orphans After communism fell in Romania, the outside world was outraged at the discovery of orphanages filled with neglected children. As Sasha Aslanian of American RadioWorks reports, scientists studying the effects of the deprivation are trying to learn how much recovery is possible.

After communism fell in Romania, the outside world was outraged at the discovery of orphanages filled with neglected children. As Sasha Aslanian of American RadioWorks reports, scientists studying the effects of the deprivation are trying to learn how much recovery is possible. 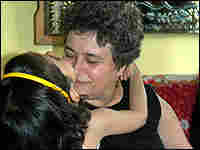 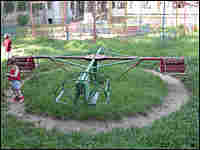 After the fall of communism in Romania, the world was shocked to discover a vast system of orphanages where unwanted children languished in cribs with little attention from caregivers. Sixteen years later, much has changed in Romania. The old orphanages are emptying, although progress is much more evident in Bucharest than in the poorer provinces.

As this grim chapter comes to a close, scientists are studying what happens inside the brains of children raised in orphanages where they suffered sensory and social deprivation, and they're learning how much recovery is possible.

Sasha Aslanian of American RadioWorks has our report.

SASHA ASLANIAN: Romania is working to close its infamous orphanages. Throughout the 1990s, thousands of children were adopted abroad, but reports of corruption and child trafficking plagued the practice. In 2001, Romania bowed to European Union pressure and placed a moratorium on international adoption.

Today, orphaned children are being reunited with birth families, sent to foster care, adopted domestically, or moving to small group homes, like this one in Bucharest, where 12 children will live out their lives together.

ASLANIAN: A boy and girl rush down the path to greet a group of visitors, among them Charles Nelson, a Harvard professor who spent five years guiding research on Romania's institutionalized children.

A disabled girl who looks about seven holds out her arms for a stranger to pick her up. The translator yells not to pick her up, but it's too late. The girl doesn't cuddle or appear comforted by the contact. She holds her body rigid, as if she's clutching a tree trunk.

Professor CHARLES NELSON (Harvard University): They just walk right up to you and want to be picked up. What Nicole was saying is that - not to pick up the little girl because the last time that happened, they picked her up and when they put her down she just threw herself on the ground and kept hitting her head, which is probably a way for her to deal with being rejected or something like that.

ASLANIAN: Charles Nelson studies brain deprivation, what happens when infants and young children don't get what they need from others. Romania has provided him with a natural experiment. On his laptop, Nelson shows a video - shot in 2001 - of three Romanian boys who grew up in an orphanage.

Prof. NELSON: So these are three kids who are playing. Now, looking their size, how old do you think these kids are?

Prof. NELSON: Yeah. So these kids all look to be about five or six years and they're all 15 to 20 years old. So that gives you an example of what happens long-term in the growth stunting.

ASLANIAN: Nelson explains it's not from lack of nutrition or calories. The boys got enough to eat. But their bodies didn't produce enough growth hormone. The theory is that in a stressful environment, like growing up in a place where no adult pays attention to you, the body conserves energy for brain development. But even with that conserved energy, the children's IQs were almost 40 points lower than average.

Prof. NELSON: The fact that their IQ is as low as it is, which we don't think is genetic in origin, is due to the profound intellectual deprivation that they experienced in the institution.

ASLANIAN: Nelson says early experiences, like having a loving adult talk to you, play with you and comfort you, are key to shaping the brain.

Prof. NELSON: If you're exposed to the wrong experiences or you have no experiences, such as occurs in deprivation, then the brain kind of gets mis-wired. And the concern we have from a neuroscience perspective is that if it's mis-wired early on for an extended period of time, it may be very difficult later on to rewire it.

ASLANIAN: Nelson says Romania's abandoned children created an opportunity to learn how much rewiring was possible at different ages. He and his colleagues started the Bucharest Early Intervention Project in 2001. They got funding in the U.S., and the Romanian government allowed them to remove 66 children from orphanages and place them in high quality foster care.

At the time, Romania had no foster care, so the researchers had to recruit and train the foster families themselves. The 66 children were from six months to two and half years old. For five years researchers tracked their progress against children who remained in the institution and a control group of Bucharest kids growing up with their own families.

Prof. NELSON: Here is an example of the dramatic change you can see in foster care.

ASLANIAN: Nelson shows a series of video clips of one girl taken over 20 months, beginning in 2001, when she lived in an orphanage. First she's seen on a blanket outside the orphanage. The dark-haired toddler has the wobbly look of a one-year-old, but she's almost two.

Prof. NELSON: When you watch her, and she falls, and she's floppy and she can barely stand. And notice the caregiver thinks this is funny and has walked away from this child. This child will basically continue to scream for attention but nothing happens.

ASLANIAN: The orphanage worker begins to sing a loud song and clap, not soothe the baby. The baby cries and crawls backwards off the blanket where the woman eventually scoops her up. The girl has no language, and on an IQ test for toddlers, she scored under 50, way below normal.

ASLANIAN: The foster mom is sitting down on the living room floor with the girl. She touches her frequently, makes eye contact, and cheers when the little girl throws a plastic ball.

Another year goes by in foster care, and the little girl is now three and a half. She's videotaped this time carrying on an animated conversation with her foster mother while tying the strings on a doll's outfit. Her IQ has risen to 82, still below normal, but she's much higher functioning than before.

ASLANIAN: Today the children in Charles Nelson's study are five to seven years old. In a typical soviet-style apartment block in Bucharest, Nelson visits another child living with his foster family, five-year-old Florene(ph).

The boy sits cautiously on the couch, eyeing the group of strangers assembled in his family's living room.

Prof. NELSON: If he had just climbed into my lap right now, I would really get worried, because that would be a sign of indiscriminately being friendly. Okay, here comes his picture.

Prof. NELSON: Wow, you can write.

ASLANIAN: Florene was randomly assigned to his foster mom when he was 11 months old. At that point he couldn't sit up, something most babies do at six months.

Prof. NELSON: Sure, at 11 months not sitting up is behind, but my intuition is that he made up for lost time pretty quickly. Let's ask. When did he start to sit up?

ASLANIAN: Nelson turns to his translator.

Prof. NELSON: So that's an example. So at 11 months, not sitting up meant he was a little behind. The fact that he was walking by 14 months meant he made up for lost time, and he caught up quickly. And that's sort of our experience. I think that when you put kids with - who've been institutionalized into good foster care like this, they rapidly start to catch up.

ASLANIAN: Kids like Florene who left the orphanage when they were still under a year old did especially well. On average, the IQ's of kids in foster care rose 10 points, and they had less depression and anxiety than the children who stayed in institutions. However, rates of attention deficit hyperactivity disorder didn't improve, and Nelson's team was puzzled by some of the other problems that didn't go away.

Prof. NELSON: These kids got longer. They got taller. They got - they weighed more, but their head circumference didn't change for the kids we placed in foster care.

ASLANIAN: Their heads stayed small, and brain activity wasn't as vigorous as it was in kids who'd never been institutionalized. It was a worrisome finding.

Prof. NELSON: I was surprised that given the changes we're seeing in behavior, that we weren't seeing these changes in brain. And we have to think about that, because there could be, in a sense, a profound reason for that that would be distressing. It would argue that these kids may never fully recover.

ASLANIAN: Or, Nelson wonders, will more years in foster care finally close the gap? The Bucharest Early Intervention Project will follow the children until they're seven to nine years old. Researchers want to do brain scans to look deeper into the brain structure, not just the brain activity of the children, and they'd like to do genetic analysis to see if certain genes influence recovery.

Nelson says the data his team gathered demonstrate there are sensitive periods in early childhood for specific kinds of crucial development. Head growth is crucial in the first year. Age two is critical for language. Nelson says day to day family life gives babies what they need in these areas. For kids who've been removed from their Romanian orphanages, it's taking a super-duper environment, therapeutic foster care, for them to catch up.

Prof. NELSON: The normal things that exist in the world - being able to see and hear and talk and be touched and talked to - are probably sufficient for most kids. The kids it's not sufficient for - the kids who lead lives of deprivation early on - they do need a super-duper environment.

ASLANIAN: The Romanian government saw how kids in the study recovered in foster care and set up its own system. Healthy children under age two are no longer supposed to be sent to orphanages, though Romania has faced criticism for how well it's actually enforcing this.

The bottom line is kids do best in families, whether created through birth, adoption or foster care. Nelson says institutions can't provide the individual attention and stimulation of family life. He hopes that other countries with orphanages, in Eastern Europe, Asia and Latin America, will be persuaded by the science too. For NPR News and American RadioWorks, I'm Sasha Aslanian.

Child Neglect and the Difficulty of Being a Social Worker Nov. 28, 2003
Exercise Helps Students in the Classroom Aug. 31, 2006
A Better Breakfast Can Boost a Child's Brainpower Sept. 4, 2006
Breakfast of Scholars: What Eggs-perts Suggest Aug. 30, 2006