Accessibility links
An Oil-Fueled Boomtown in Canada's Subarctic Forty years ago, Fort McMurray was a subarctic outpost with 1,600 people and little else. Today, it's a northern Canadian boomtown of 65,000 with traffic jams and workers from around the globe making six-figure salaries. Behind that staggering growth: the price of oil. 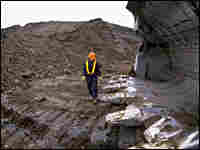 A worker for Syncrude stands in an oil pit in this 2001 file photo. The giant shovel next to him scoops up the sand and takes it back to a refinery where the oil is extracted. Syncrude mines oil sand from 250-foot-deep pits like this one, which dot the poplar and pine forests of northeastern Alberta. Greg Smith/Corbis hide caption 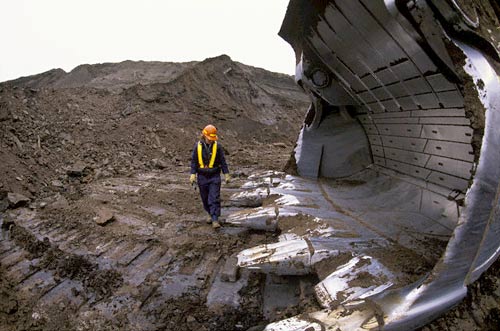 A worker for Syncrude stands in an oil pit in this 2001 file photo. The giant shovel next to him scoops up the sand and takes it back to a refinery where the oil is extracted. Syncrude mines oil sand from 250-foot-deep pits like this one, which dot the poplar and pine forests of northeastern Alberta.

The oil sands operations in Fort McMurray are vast. See the oil refinieries from an aerial perspective and glimpse the giant sand oil pits in this brief video. 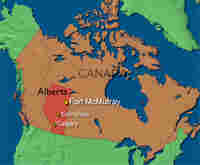 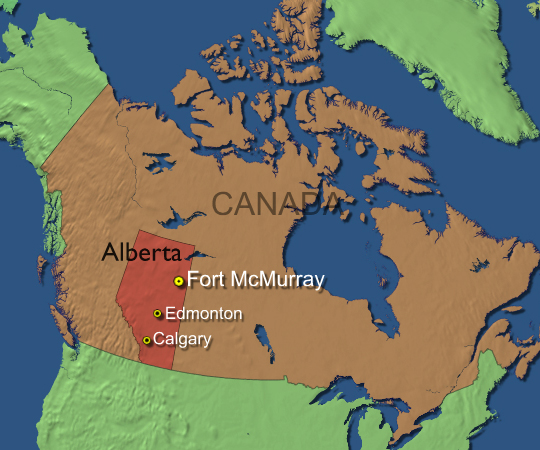 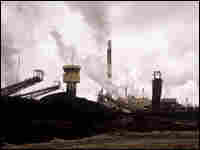 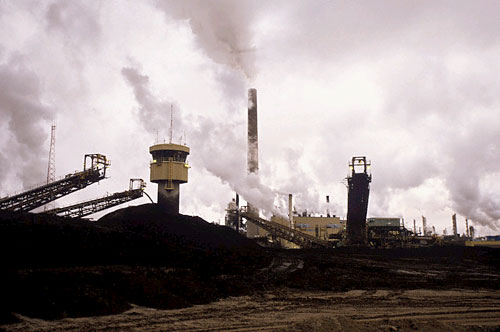 Smoke billows from the stacks of an oil-processing plant at Syncrude's operations in Fort McMurray, Alberta, Canada. (2001 file photo) 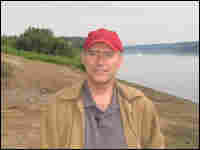 Neil Camarta stands on the banks of the Athabasca River, which runs through Alberta's oil sands. Camarta, who runs Petro-Canada's oil-sands project, says his company will probably build an airstrip to fly workers in. Frank Langfitt for NPR hide caption

The workers call it Fort McMoney.

But forty years ago, Fort McMurray was a subartic outpost with 1,600 people, a dusty main street and three restaurants.

Today, it's a Northern Canadian boomtown of 65,000. There are traffic jams, a casino and workers from around the globe making six-figure salaries.

What's behind that staggering growth? The price of oil.

Fort McMurray sits on the edge of Alberta's oil sands, some of the largest reserves on the planet. Extracting that oil is expensive, but with prices still high, companies are scrambling to find enough workers.

On weekend nights, the line at Fort McMurray's Newfie Club stretches down the sidewalk. The bar is packed with workers who've traveled more than 2,000 miles from Canada's East Coast, where jobs are scarce.

Daniel Teasdale came from Nova Scotia in February. He runs an excavator and, at 21 years old, he expects to make more than $115,000 U.S. a year.

"I like the place, but I like the money the best out of anything," he says. "It's just triple what I was making at home. Even more, it's unbelievable. Money is nothing out here. People are throwing money all the time. It's just money, money, money."

In June, Fort McMurray's Ford dealership sold more vehicles than any other in Canada. Colin Matthews, a 25-year-old oil-sands worker, is at the dealership looking for a new truck -- his second in two years.

"It's something to show off when we go back to Newfoundland next year," he says, looking at an F-150. "It's going to be a good sense of pride, knowing that you worked so hard and you've got something good to show for it."

Only Saudi Arabia has more oil than Fort McMurray, which is estimated to have some 174 billion barrels. If oil prices fell by $20 a barrel, operations here would still be profitable.

Some companies -- like Canada's Syncrude -- have carved out mines the size of canyons. Giant dump-trucks transport the black oil sands. The dump truck drivers make $80,000 to $100,000 a year with overtime.

Those salaries have helped nearly double the population of Fort McMurray in a decade. More than 30 commercial flights touch down at the city's tiny airport each day, bringing workers to the mines from four continents.

Catherine Martin, a salsa teacher from Bolivia, has students in her class from all over the world.

Joseph Garnes came to Fort McMurray from the Caribbean 15 years ago. At the city's heritage festival, he says he's become attached to the place.

"Back in Trinidad, we drilled for the oil. Didn't know what open-pit mining was until I got here in Fort McMurray," he says. "But I came and enjoyed it. And I would go and come back, but Fort McMurray is my home. I'll be here for a long time."

Companies find it difficult, however, to lure capable workers to a place where temperatures can plunge to 40 below zero. They offer employee incentives, like on-site work camps with steak dinners and satellite TV. The camp at Canadian Natural Resources has a Tim Horton's, Canada's wildly popular coffee chain.

Competition to find housing in Fort McMurray is just as fierce. The influx of workers has driven the rental vacancy rate to less than 0.3 percent. Mobile homes can run as high as $300,000.

Single-family homes in one of Fort McMurray's nicest suburbs are packed in so tightly, you can jump from roof to roof. And they're priced at more than half a million dollars.

Facing those prices, some newcomers sleep at the Salvation Army, which is always full.

Steven Poirier came to Fort McMurray from Cornwall, Ontario. "The way people talked down there, there was like a gold mine here. And I got here and it's harder to get work than you think," he says.

Poirier lacks the right safety certification and is now doing renovation work. He sleeps at the Salvation Army, and is shocked at the prices.

"Everything is way too expensive here," he says. "I went to IGA just to buy some bologna and it's like $6, where we could pay like $3 at home -- that's double the price. The bread is $3 a loaf. It's unreal."

The town is strained in other ways. Around 5 p.m., the traffic backs up a half-mile outside of town. After dark, junkies stagger around the parking lot at the 7-Eleven.

"You know, there are a lot of homeless people here in town now. But they're not our local homeless people," says Frances Jean, who runs a sub shop and a carwash nearby. "They're people who have come to town. They've gotten involved with drugs, they've lost their jobs, and then they're just drifting around all over. I see them at my carwash, selling drugs at 12 p.m. I live a block from here, but at night, I won't walk home."

The boom in Fort McMurray shows no sign of slowing. Firms are planning $5 billion worth of projects every year.

As long as oil remains more than $40 a barrel, companies say they can make money here.

Back at the Newfie Club, Daniel Teasdale relishes the possibilities.

"Well, I have 10 kids in my family. And I have three older brothers, and a twin brother, and a younger brother," he says. "I was talking to every one of them today, and they all want to come out."

Why not? Seven months ago, Teasdale was digging out basements for less than $10 an hour in Nova Scotia. Now, he's making six figures and saving for a house.

Teasdale says he plans to stay in Fort McMurray for years.