Accessibility links
Audra McDonald: A 'Theater Geek' Turns to Pop Audra McDonald is a bona-fide Broadway star and a well-regarded recording artist whose albums have featured American popular standards and newer musical theater. But her new album takes her in a different direction. 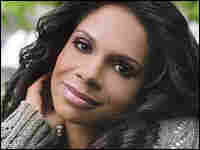 On 'My Stupid Mouth'

On 'God Give Me Strength'

Hear 'God Give Me Strength'

As a teenager in the 1980s, Audra McDonald says she wasn't listening to Wham or Devo; she was listening to Barbra Streisand. The self-professed "theater geek," who grew up in Fresno, Calif., immersed herself in musicals.

She went from listening to Broadway music to appearing on its stages, winning four Tony Awards along the way — three of them before she was 30.

But her new album, Build a Bridge, departs from that tradition with songs made popular by pop balladeer John Mayer, Laura Nyro and Neil Young, among others.

Is it a "pop" album? McDonald says no.

"For me, [these are] songs that could be in musicals," McDonald says. " Almost all of them, you know, are character-driven and tell wonderful stories. But I decided I just didn't want to go to music theater to look for these songs."

McDonald's longtime music director, Ted Sperling, says that when the two of them choose songs for her, McDonald's theatrical instincts are at the forefront — no matter the genre.

"They have to have some dramatic content. They just can't be pretty songs, because she has some instinctive trigger," Sperling says. "If they don't have something to sing about, really, that she can dig her teeth into, she just rejects them."

For example, McDonald takes Elvis Costello and Burt Bacharach's song from the film Grace of My Heart, "God Give Me Strength," and turns it into a dramatic aria. But Build a Bridge also features a song from Guettel's score for the show The Light in the Piazza; and finds tender insight in "Bein' Green," a song from The Muppet Movie, which McDonald often watches with her 5-year-old daughter.

The album is released Tuesday, and McDonald is about to take her songs on a multi-city tour, including a "Live at Lincoln Center" performance in mid-October. She returns to Broadway next spring in a revival of 110 in the Shade.