Accessibility links
Palms Fading from Los Angeles Landscape Los Angeles is known as a land of palm trees. But they aren't native to the city. Most of the trees were transplanted to Los Angeles in the early 20th century. Now, scores of those iconic palms are dying from disease or old age.

Los Angeles is known as a land of palm trees. But they aren't native to the city. Most of the trees were transplanted to Los Angeles in the early 20th century. Now, scores of those iconic palms are dying from disease or old age. 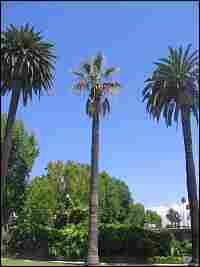 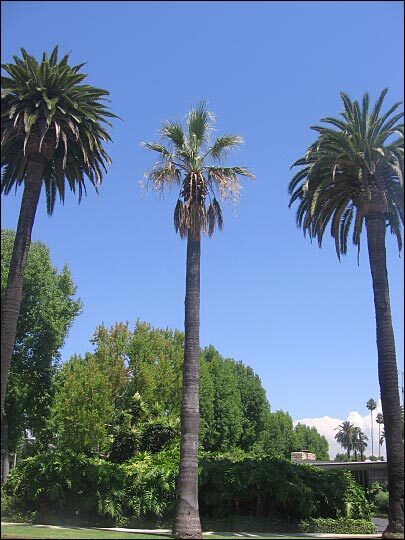 This is MORNING EDITION from NPR News. I'm Lynn Neary.

Yesterday, we told you of Aspen trees dying across the West. This morning, we must tell you of the palm trees in Los Angeles, they're dying by the dozens -from old age and disease.

And here's the surprising part, some local experts think the city might be better off without so many of them.

MANDALIT DEL BARCO: In the shadow of L.A.'s downtown skyscrapers grows of palm trees, tower of Echo Park. Many of them are Phoenix date palms brought over from the Canary Islands over a century ago.

But look closely and you'll see that many of these once luxurious trees have withered.

We're standing under a tree that has hardly any palm fronds. They're just kind of dried up and brown.

Mr. STEVE DUNLAP (Los Angeles Department of Recreation and Parks; Forestry Division): That's true. You can see the ones that are still up there are yellow on the one side and they're about a quarter of the size of the fronds on the healthy tree that's only 20 feet away from it.

DEL BARCO: Steve Dunlap is supervising tree surgeon for L.A.'s Recreation and Parks Forestry Division. He says spores of phoenix date palms across the city are infected with a fungus that basically chokes the tree to death.

Mr. DUNLAP: The plumbing inside the tree has become so infested with the fusarium fungus that it, it's like arteriosclerosis for human beings. The water just isn't able to go up and down the tree and the cell bundles just fall apart.

DEL BARCO: There's no cure for these infected palms and Dunlap doesn't recommend replacing them, because the fungus stays in the soil. Plus, there's the matter of cost. Developers have driven up both the demand and the price by planting so many date palms in places such as Las Vegas.

Meanwhile, across L.A. as palms slowly die, there's no plan to replace them.

Ms. PAULA DANIELS (Commissioner, Board of Public Works, Los Angeles, California): I like the oak better.

DEL BARCO: Paula Daniels is commissioner of L.A.'s Board of Public Works. She's heading a citywide drive to plant a million trees this year, but the palm isn't one of them. She claims, unlike just about every other tree, palms do very little to trap air pollution.

Ms. DANIELS: In fact, palm trees are not a tree, they're a grass.

DEL BARCO: Not only that, Daniels says palms are a little more than eye candy.

Ms. DANIELS: You think of them as around the Hollywood sign or in Beverly Hills. They're certainly featured in a lot of movies, so they certainly have a place here. But in terms of the goals of this initiative to drive environmental change, we won't be including them in our strategic planting.

DEL BARCO: Like a lot of Angelinos, most palm trees are immigrants. Only one variety, the Washington palm, is native. The rest were imported from places like Mexico, mostly by developers and promoters hoping to lure folks to L.A. in the early 1900s. Over time, the palms have become the heart of many neighborhoods.

In Beverly Hills, tall, thin palm trees line both sides of Beverly Drive. Many are Mexican fan palms that have grown more than 100 feet tall.

DEL BARCO: Ken Pfalzgraf is the urban forester for Beverly Hills. He says while Mexican palms are not bothered by the fungus, they are reaching the end of their life spans. But Pfalzgraf says unlike the city of Los Angeles, Beverly Hills will never sit by and watch palm trees vanish from landscape.

Mr. PFALZGRAF: Every weekend someone loads up the station wagon, goes to the nursery and buys palms trees and plants them in their backyard. The day will never come where the L.A. basin is void of palm trees.

BARCO: You may just have to look harder to find them.