Accessibility links
Ancient Fossil Child Discovered in Ethiopia Scientists in Ethiopia have discovered the 3.3 million-year-old skeleton of a child, the oldest child fossil on record. Anthropologists around the world are practically salivating at the information the skeleton might hold. 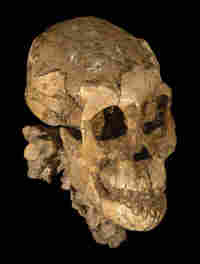 The skull and associated partial skeleton (DIK-1-1) were recovered in a block of sandstone matrix. The setting indicates that the juvenile hominin was buried as an intact corpse shortly after death during a major flood event. Zeresenay Alemseged and Copyright Authority for Research and Conservation of Cultrual Heritages (ARCCH) hide caption 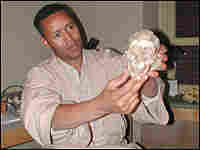 The 3.3 million -year-old skeleton just found in Dikika has plenty of anthropological company. Here's a look at some of the top regional finds of the last 40 years.

Researchers were quite excited when they saw what looked like an almost-complete hominid skeleton at the Hadar site in Ethiopia. That night back at camp, they celebrated by drinking and singing Beatles' songs — including "Lucy in the Sky With Diamonds." At some point during the night — no one remembers when — researchers started calling the skeleton Lucy, too.

WHO: 13 3.2-million-year-old individuals ranging from adults to children

Because they were the oldest living example of a species living in a group, National Geographic called the skeletons "The First Family."

Hill and a colleague were tossing elephant dung at each other at an architectural site. Hill dived to avoid a piece of flying feces and discovered the footprints.

Scientists in Ethiopia have discovered the 3.3 million-year-old skeleton of a child, the oldest child fossil on record. The fossil is known as the Dikika child, after the region where it was found.

Though not a human, the apelike creature could walk upright. The child is from the same species as the famous fossil Lucy, which was also discovered in Ethiopia over 30 years ago. It was probably female, and about three when it died.

The child lay within a sandstone tomb for over 3 million years. Six years ago, an Ethiopian scientist saw part of a skull sticking up out of the ground.

"I realized the significance of the fossil," says Zeresenay Alemseged, of the Max Planck Institute in Germany. "But what we had then was only the upper part of the body -- including the skull."

Alemseged soon realized the fossil contained more than a skull, but that retrieving it from the ground would be a time-consuming process.

"It took me, and I underline, 5 years," says Alemseged. "It was thousands and thousands of hours cleaning, preparing, and describing this fossil since it was discovered in 2000."

As Alemseged scraped away, rumors spread throughout the anthropological community. Bernard Wood, an anthropologist at George Washington University, visited Alemseged's lab a year ago to see the skeleton.

"He took this thing out of his safe and I was just sort of standing there with my jaw dropping somewhere around my knees," says Wood. "It's just the most remarkable thing to see -- to contemplate what is such an unlikely event – which is the fossilization -- and then the fact that it's found. I mean, it's such a long shot."

Alemseged has now described the fossil in the journal Nature . Besides the skull, the fossil contains the upper and lower jaws, ribs, finger bones, leg and foot bones. The baby and adult teeth are still in the jaw. Wood says anthropologists are practically salivating at the information the skeleton might hold.

"You very seldom find all these things together," he says. "You rarely find them all together in an infant."

The child is from the group called Australopithecus afarensis . It's widely believed to be a transitional form between tree-dwelling primates and the earliest human-like species, but its exact position in the primate family tree is still debated.

Anthropologists do know that the A. afarensis walked, one of the first developments in human evolution. The lower body of the child does belong to a walker, but its finger bones are curved, suggesting a climber. The shoulder blade of the creature, Wood says, is also quite rare.

"You very rarely find [a fully preserved shoulder blade] in the fossil record," he says, "It's surrounded by muscle and it's high up on the wish list of scavengers. But this isn't modern human like either. Rather intriguingly, it's like the shoulder blade of a gorilla."

The fossil is especially interesting to anthropologists because it's a child, which could illuminate how these early creatures matured.

It may also indicate how changes in the Ethiopian climate could have influenced human evolution. Rene Bobe, from the University of Georgia and an author on the scientific paper, says the landscape was changing when A. afarensis and later, the first human ancestors, lived.

"There is indeed an opening of the environment," he says, "which means more grasslands coming in and fewer trees and forests."

There will be more chances for researchers to study the fossil. Some of the fossil is still hidden because Alemseged says he hasn't finished scraping away all the sandstone, a process which may take some time. So there's still more to see.

But Alemseged "doesn't want to be rushed" into finishing the recovery work. "Maybe it's the Ethiopian wisdom," he says. "We had this huge responsibility of conveying right scientific messages to the scientific community so I decided right from the beginning that we would wait as long as it takes."