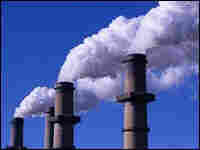 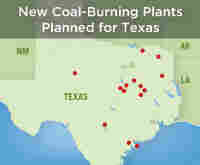 The new power plants -- 17 coal-burning and one petroleum-coke plant -- proposed for Texas would emit the equivalent of 19 million automobiles' worth of global warming gases every year. Doug Beach for NPR hide caption 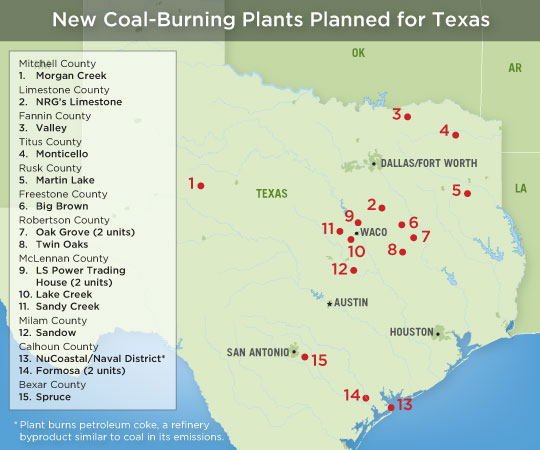 The 18 new coal-burning power plants proposed for Texas would emit the equivalent of 19 million automobiles' worth of global warning gases every year. The mayors of Houston and Dallas say the emissions would disproportionately pollute their cities, which already are out of compliance with federal clean-air standards. When added to the state’s already prodigious output, Texas plants will send up nearly as much carbon dioxide as power plants in California, New York and Florida combined. 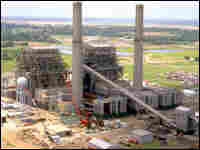 Big Brown is one of the oldest coal plants in Texas. It emits more than 82,000 tons of sulfur dioxide, 6,700 tons of nitrous oxide and 1,200 pounds of mercury each year. Its owner, utility TXU, plans to build 11 of the 18 proposed new plants. TXU Corp. hide caption 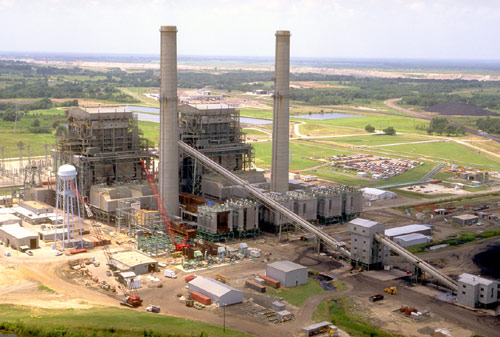 Big Brown is one of the oldest coal plants in Texas. It emits more than 82,000 tons of sulfur dioxide, 6,700 tons of nitrous oxide and 1,200 pounds of mercury each year. Its owner, utility TXU, plans to build 11 of the 18 proposed new plants.

Dallas Mayor Laura Miller wants Texas utility companies to adopt a process known as coal gasification, which can convert dirty coal into clean natural gas and liquid fuel. None of the 18 plants proposed for Texas will use the process.

But across the country, several companies are working on clean-coal technologies based on gasification. Read more about these efforts. 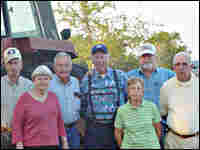 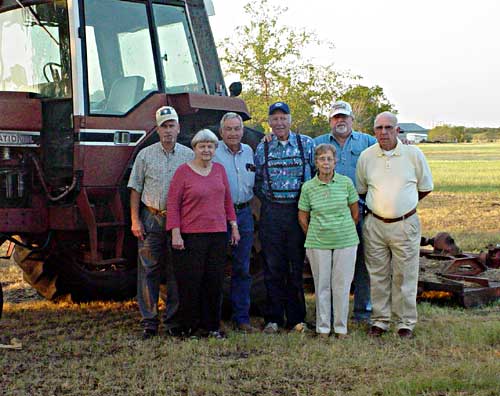 Texas already has a sorry reputation for its dirty air. Houston vies with Los Angeles, trading back and forth the No. 1 spot on the list of cities most choked by smog. Now, Texas utility companies are proposing to build 17 new coal-burning power plants and one petroleum-coke power plant over the next four years. They have the support of the governor, but mayors in some of the state's largest cities are putting up a fight.

Gov. Rick Perry has issued an executive order fast-tracking state permits for the proposed plants. But a coalition of Texas mayors, newspaper editors and environmentalists are playing the tortoise in this Texas race, trying to stave off the coal plants by slowing the process down until more Democrats get elected in Washington, D.C.

"There's a national movement by the utility companies to build coal-burning plants," says Dallas Mayor Laura Miller. "And the reason is coal is plentiful, coal is cheap and, unfortunately, coal pollutes the air aggressively."

Miller and Houston's Mayor Bill White are leading the fight against the proposed coal-burning plants.

"I don't think people have any idea what it will be like if we have 18 power plants now, and they wake up in five years and we have twice as many then. I think you're going to see a significant change in the way our sky looks," Miller says.

Cleaner Technology, at a Higher Price

Miller wants the utility companies to utilize a rising star in coal plant technology. It's called "integrated gasification combined cycle," and this kind of coal plant is 70 percent to 90 percent cleaner than the plants proposed for Texas. But it's also more expensive. To Miller's extreme dissatisfaction, all of the proposed power plants in Texas plan to use traditional coal technology.

"I don't blame the utility companies for wanting to do it," Miller says, "but I think it's incumbent on elected officials to say, 'Wait a minute, that is old technology. There is new technology that is better, cleaner technology and we want you to consider that instead.'"

Seventeen other Texas mayors representing about one-third of the state's population have joined Miller in opposition to the current proposal. But the governor appointees will make the final decision.

Gov. Rick Perry declined to comment for this story. But in an op-ed piece to the Dallas Morning News, the governor wrote that he believed any delay in building the proposed plants would damage the state's economy. Perry dismissed the opposition's concerns over air quality, arguing they wanted to return Texas to the era of the horse and buggy. Perry emphasized that the utility companies would reduce some pollutants by 20 percent or more.

"These newer units are cleaner than the older units," says Eric Hendrickson, the state engineer who's reviewing plant permit applications. "And then there will be additional controls applied to the existing facilities, and these utilities are contemplating how they are going to control those emissions to get to those new levels."

The new coal plants will pollute the air with nitrogen oxide, sulfur dioxide and mercury. But they will be much cleaner than existing plants. Yet, the old plants will continue running full bore; there are no plans to shut them down or replace them.

One emission the federal government does not regulate is carbon dioxide, the primary global-warming gas. The new power plants in Texas will emit the equivalent of 19 million automobiles' worth of carbon dioxide every year. When all the new plants are up and running, Texas will send nearly as much carbon dioxide up its stacks as California, New York and Florida combined.

"The modern coal plant of today is quite a different power plant than 30 years ago," says Mike McCall, CEO of the utility company TXU's wholesale division. He says the emissions from their new plants will be nothing like Big Brown, a TXU utility whose two units burn 40,000 tons of coal every day. Massive haulers carrying 100 tons of coal work around the clock to feed the furnaces.

McCall says that TXU plans to spend $500 million to install some pollution devices on some of its older plants, too.

"We're going to come in and voluntarily make significant retrofits on our existing fleet," McCall says. "We're going to add 9,000 megawatts of power, but our emissions are going to be 20 percent less than our 2005 levels."

But TXU and the other utility companies say they're not going to use coal gasification for any of the plants in Texas.

"Coal gasification is a technology that we are very interested in," McCall says. "We have a team of engineers working on it, but it is not ready for Texas. The state needs power, we've got millions of people moving to the state. And we wanted to step up in a way that's comprehensive."

But the increasingly organized opposition refutes that there is an urgent need for 9,000 megawatts of additional capacity. They say the real urgency is political, that the utility companies are taking advantage of the fact that their allies still control all branches of government in Washington, D.C., and Austin.

"The relationship between the utility companies and Rick Perry has been a cozy one," says Craig McDonald, director of Texans for Public Justice, a political watchdog group which tracks Texas campaign contributions. "Texas has a pay-to-play government. It's not pretty, but that's the way it works down here."

The governor's decision to speed up the permit process has drawn attention around the state. His executive order is especially not going over well with ranchers in central Texas, where many of the new power plants will be built.

"I think he's been bought off," says rancher Ruth Pilant. "TXU has given him money to fast-track these permits and give him enough money and he'll do most anything apparently."

Pilant's land is located inside what she calls "the ring of fire," surrounded by what will eventually be six major coal-burning power plants.

"Why don't these people see what they're doing to the state of Texas?" she asks. "Do we want to be known for the most coal-fired plants in the United States? That doesn't sound good to me. I want to see the stars in the sky, you know, that's what we're out here for, that's the reason we're in Texas."

Some 200 ranchers have formed a group they're calling T-Power -- Texans Protecting Water, Environment and Resources -- and are vowing to fight. The formal hearings on the power plant permits begin this fall in Austin. With the state government and the utility companies on one side of the aisle, and the ranchers, mayors and environmentalists on the other, the level of debate is predicted to be lively.