Accessibility links
New Rail Link to Tibet Generates Talk, Tourism More than 300,000 passengers have ridden China's railway to Tibet since it opened to traffic two months ago. China sees it as a historic event, but the train's long-term effects on the remote Himalayan region remain to be seen. 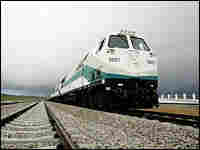 A maiden voyage from Beijing on the Qinghai-Tibet Railway arrives at the Tibetan town of Naqu on July 3. Getty Images hide caption 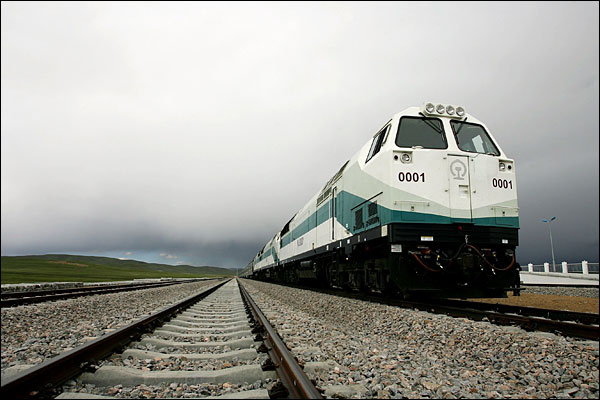 A maiden voyage from Beijing on the Qinghai-Tibet Railway arrives at the Tibetan town of Naqu on July 3. 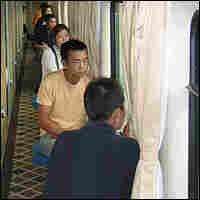 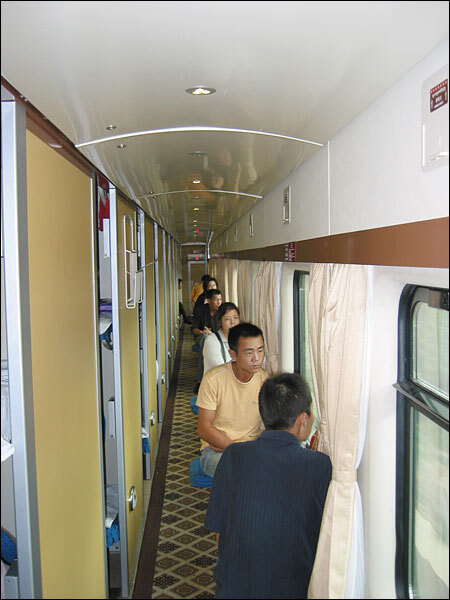 Passengers on the Beijing to Lhasa train sit outside their sleeping compartments.

Scroll down for Anthony Kuhn's account of his rail trip, and a map of the route.

Chinese laborers and businessmen pay about $45 for a simple seat on the train to Tibet. Anthony Kuhn, NPR hide caption 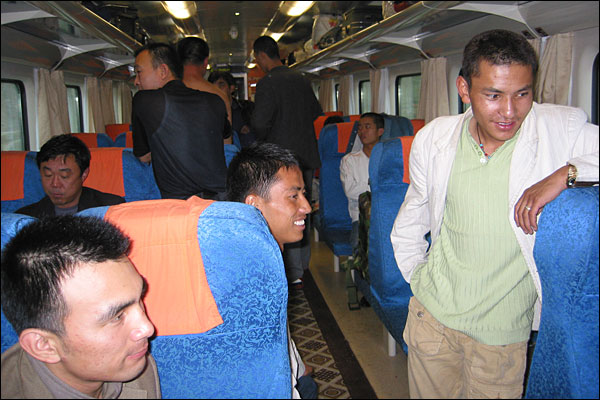 Chinese laborers and businessmen pay about $45 for a simple seat on the train to Tibet.

Like the Golden Spike that completed America's transcontinental railroad, China sees the recent completion of its first rail link to Tibet as a historic event. Since the railway opened to traffic two months ago, more than 300,000 passengers have traveled by rail to the remote Himalayan region.

A regular seat from Beijing to Lhasa costs the equivalent of just $45. If you don't feel like sitting for 48 hours straight, you can pay $150 for a berth in a sleeper compartment.

The sleeping berths are mostly packed with middle- and upper-class Chinese tourists; in contrast, the $45 seats are mostly filled with young laborers going to Tibet or cities along the line.

Some Chinese and Tibetans are proud of having built the world's highest railway, and believe it will help to pull Tibet out of poverty. But they are also concerned about the railway's long-term impact on Tibet's environment and culture.

"I think to most people, Tibet is a very sacred, very mysterious place. This train will definitely help Tibet to develop. It will bring lots of tourists," says vacationing airline stewardess Lisa Li on a recent rail journey to Lhasa. "But I am concerned that the increase in tourists will have a negative impact on Tibet's environment."

Most of the soil under the railway is permafrost. Chinese engineers have put some of the tracks on pilings sunk deep below the unstable soil. Ammonia-filled, metal cooling rods stuck into the earth ensure that the permafrost stays frozen, while fences and tunnels are in place to protect the migration of rare animals.

Despite press reports of buckling rails and litter on the tracks, the Chinese government has already reached its verdict on the $4.2 billion project. The train's announcer proclaims, "The Qinghai-Tibet Railway is not only a great construction work, recognized by the whole world, but also a great sample of harmonious coexistence between nature and humankind."

The train and its impact on Tibet has become a politicized issue, and many Lhasa residents were wary of expressing their opinions.

One Tibetan woman who would not give her name said, "The train's arrival in Tibet is not a good or welcome event. Many more Han Chinese will enter Tibet and occupy our land. More armless and legless people and beggars will enter too."

The political atmosphere in Tibet is extremely tense. Lhasa residents say the new communist party secretary in town has launched a political campaign to denounce the Tibetan's exiled spiritual and political leader, the Dalai Lama.

For his part, the Dalai Lama has expressed cautious optimism about the new railway, saying through a spokesperson that he would withhold judgment until he sees how the railway is being used.

Tibetans generally agree that globalization had already arrived in Tibet long before the new railway. The trains will certainly speed up that process, they say. In the future, China plans to extend the railway westward deeper into Tibet, toward the border with India. It's hard to tell now what will happen when tourists and modernity finally reach Tibet's remote interior and its inhabitants. 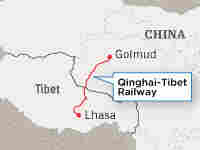 NPR's Anthony Kuhn wishes he had taken the train from Golmud instead of all the way from Beijing. Doug Beach, NPR hide caption 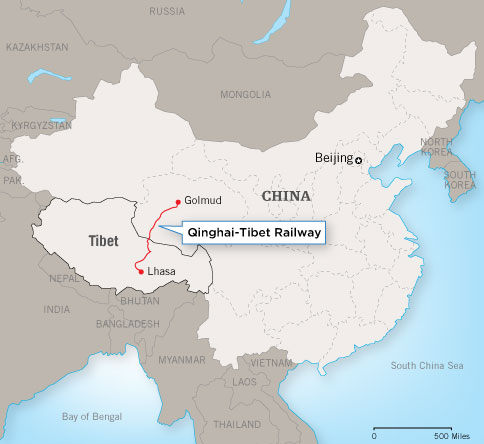 NPR's Anthony Kuhn wishes he had taken the train from Golmud instead of all the way from Beijing.

On July 1, the Chinese government celebrated with great fanfare the opening of the final stretch of its railway to Tibet. The section runs between the city of Golmud in Qinghai province and the Tibetan capital Lhasa.

Press seats for the maiden voyage from Beijing were under the control of the Foreign Ministry, whose accreditation is necessary for foreign journalists to operate in China. Some 160 correspondents applied for 40 tickets that the ministry had reserved for the foreign media. I was disappointed not to get one.

But the day the press-laden train set out from Beijing, many of our Chinese colleagues were already aboard a train going from Golmud. That's where the real news was. President Hu Jintao had officially inaugurated the new railway there that day. By the time the foreign reporters arrived in Lhasa from Beijing, the news was two days old.

I have no regrets about missing the media scrum. Some Chinese and Tibetans thought the media hype surrounding the train was excessive and only served to politicize the issue. While the railroad has overtaken air and road travel to become the most heavily used form of transport to Tibet, it was hardly the first vehicle to bring modernization to the region.

The train itself was quite luxurious compared with most Chinese trains. The carriages were built by Canada's Bombardier Co., to the dismay of some Tibet activists. First-class sleeping berths each had their own flat-panel televisions and headphones, and an oxygen valve to which you could attach your nose via a plastic tube.

The train is completely sealed off from the outside, except for the airplane-style toilets, where windows can be opened for much-needed ventilation. Electronic displays in each car show the altitude and outside temperature. The dining car offers up standard Chinese fare, including a respectable spicy tofu.

The public-address system blares out tour-guide-like explanations in Chinese, Tibetan and English, reassurances that the train is not destroying the environment, and Chinese songs about the railway.

All this, along with the tourists snapping their camera shutters furiously at the passing wildlife, gives the impression of an amusement park ride.

One thing that I found remarkable about the journey was the hardy optimism of the laborers in the $45 seats, staving off exhaustion with camaraderie and the occasional nap, sprawled across empty seats.

I spoke there with a young worker from northern Shanxi province who had worked on Lhasa's new train station, operating a cement mixer. Previously unemployed at home, he got the job through a relative who was a construction contractor. This time, he told me, he was returning to make some repairs to the station.

He added that he had found the Tibetans who made up most of his construction crew very agreeable people. But he said he was concerned about the effects of the high altitude on his health, and planned to return to Shanxi after a year or two of working in Tibet.

While critics say that Beijing is intentionally encouraging ethnic majority Han Chinese to migrate to and settle in Tibet, all the laborers I spoke to were short-time prospectors. None of these "go west, young Han" types intended to stay in Tibet. After nearly a week in Lhasa, several of them called to tell me that they had failed to find work and were heading home.