Accessibility links
'Toynbee Tiles' Mystery Resurrected in Philly The Toynbee tiles have fascinated fans of street art for more than 25 years. Embedded in the streets of Philadelphia and other cities, they carried cryptic messages about reviving the dead. After a long hiatus, they are cropping up anew. 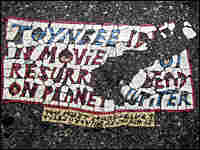 Some tiles go beyond the staple message, as in this one with the addendum: "you must make and glue tiles you as media is." Joel Rose, WHYY hide caption 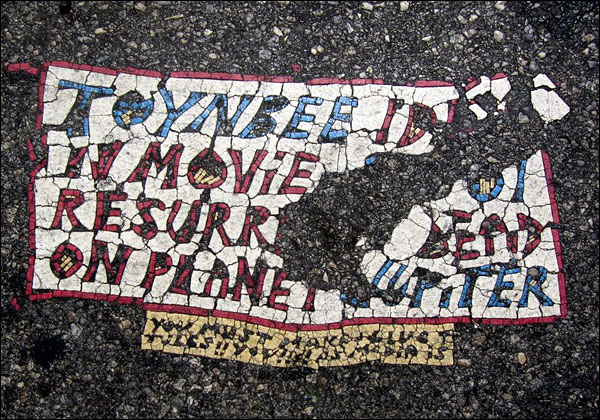 Some tiles go beyond the staple message, as in this one with the addendum: "you must make and glue tiles you as media is." 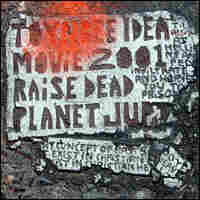 A few clues about the Toynbee tiles pointed to an address in South Philadelphia, but that turned out to be a dead end hide caption 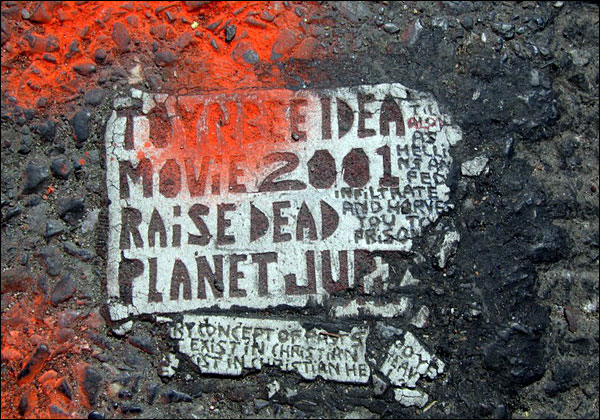 A few clues about the Toynbee tiles pointed to an address in South Philadelphia, but that turned out to be a dead end 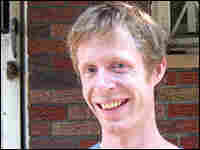 Justin Duerr, who is making a documentary about the tiles, says he has a good guess who the original artist is... but he's not revealing it. Joel Rose, WHYY hide caption

As an urban mystery, the Toynbee tiles have fascinated fans of street art for more than 25 years. Tending to be about the size of license plates, the tiles are embedded in the streets of various cities, including New York, Washington, Chicago -- even Rio de Janeiro and Buenos Aires.

The cement-bound messages take on various forms, but usually bear some variation of the following text: "Toynbee Idea: In Kubrick's 2001, Resurrect Dead on Planet Jupiter." But no one is certain what the messages mean, or who may have planted them. They seem to be made of linoleum, presumably stuck to the street in the middle of the night.

The tiles seem to originate in Philadelphia, where artist Justin Duerr is working on a documentary film about them. He theorizes that the messages refer to late British historian Arnold J. Toynbee, while Kubrick of course refers to Stanley Kubrick and his film 2001: A Space Odyssey.

"Resurrecting the dead could potentially mean resurrecting a dead civilization, or a dead idea, or concept," Duerr says. "Because that's something Toynbee talks about."

Toynbee tiles first appeared in the early 1980s, around the same time playwright David Mamet published the one-act play 4 AM. Mamet's play centers on a radio host and a strange caller who wants to talk about his plan to -- yes, resurrect the dead on Jupiter.

Mamet says he made the caller up; but in 1983, a real caller identifying himself as a city social worker rang Clark DeLeon at The Philadelphia Inquirer.

DeLeon, who was writing a daily column for the Inquirer at the time, recalls: "He had this idea about people living, or being resurrected from the planet Jupiter. Something about the molecules. It was just so wacky and out there. I believe my headline on it was, 'You wanna run that by me again?'"

The caller said his name was James Morasco, and there was a Philadelphia social worker by that name. Morasco died several years ago, and his widow insists he didn't have anything to do with the tiles.

In some cases, the Toynbee tiles branch out beyond their core message about Jupiter. A few carry instructions such as "you must make and glue tiles" and "you as media is" [sic]. DeLeon says the tiler seems to have a special vendetta against John S. Knight, founder of the Knight Ridder newspaper chain that used to own the Inquirer. A few tiles refer to Knight as a "Helion Jew" and even a Soviet Spy.

"It's rife with paranoia, everything these tiles say, and yet they're so bizarre," DeLeon says. "They catch your eye. And once you see them, you start noticing them everywhere."

By the late 1990s, many of the older tiles had been paved over. Then, about four years ago, Justin Duerr started seeing new ones.

Duerr and other experts think the new tiles are the work of a copycat. There are slight, but telling, differences: For example, instead of saying "resurrect dead," the new tiles say "raise dead." Whoever it is, the current tiler has clearly been busy. Dozens of new tiles have appeared in and around Philadelphia, a few in just the last month. They've even been spotted in the breakdown lane of a busy interstate.

At this point, Duerr thinks he does have a pretty good guess about who the original tiler was. But he's not telling.

"It's a form of art," Duerr says. "But it's not something put down with the idea this person is thinking they'll be in art gallery, or try to make money off it. It's sincere in what it's trying to convey."