Accessibility links
Mexico's Drug Wars Leave Rising Death Toll More than 1,500 people have died in narcotics-related killings in Mexico this year. Dozens of people have been beheaded and tortured as cartels across Mexico fight for the lucrative drug trafficking routes into the United States. 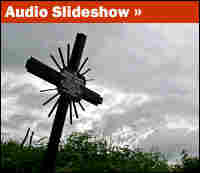 A black cross at the side of the road in Mexico's Michoacan state is a gruesome memorial to a local gang leader whose body was dumped on the site. Jake Price for NPR hide caption 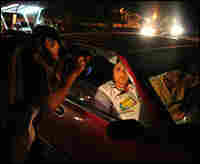 Security forces conduct an operation to look for drugs and guns in Michoacan. Jake Price for NPR hide caption 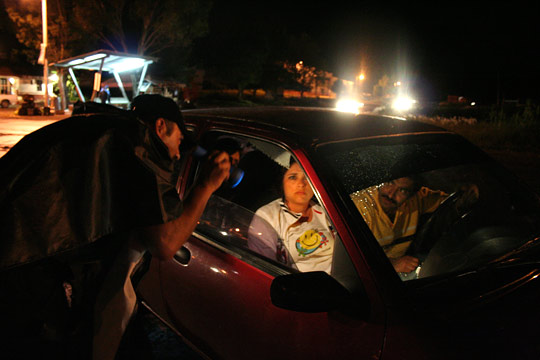 Security forces conduct an operation to look for drugs and guns in Michoacan.

Mexican and U.S. officials are meeting Thursday in Laredo, Texas, to discuss concerns about growing drug violence in Mexico. U.S. Ambassador Tony Garza has advised U.S. citizens to exercise extreme caution when traveling in Mexico because of "the rising level of brutal violence."

More than 1,500 people have died in narcotics-related killings this year alone. In recent months, dozens of people have been beheaded and tortured as cartels across Mexico fight for the lucrative drug-trafficking routes into the United States.

The state of Michoacan, best known outside of Mexico as the place where monarch butterflies winter, has the highest number of people killed -- 400 so far this year. Mexican intelligence officials estimate that at least 65,000 people in Michoacan live off the drug trade in some way.

"They told everyone to lie on the ground, and they shot into the air," he says.

The men were also carrying a sack. Inside it were five severed heads, which they dumped onto the dance floor.

Alvarez says he doesn't want to talk about the incident. In fact, when pressed, he nervously defends the assailants.

"These men didn't come here to hurt anyone, they work against bad people, those men whose heads they cut were like bugs," he says.

Victor Alejandro, the owner of a small shop across the road from the dance hall, says he's afraid to be seen talking to a stranger.

"There are informants everywhere," he says.

"We live in fear because of the situation of violence. There are a lot of capos, people who deal in illicit things, who are in Uruapan right now. They all have their groups and they bring problems, and they resolve their issues in the street violently. Let's say I honk my horn at the wrong person, something bad could happen... there have been cases that they confront people with guns."

While the drug violence has everyone worried, the drug kingpins in Michoacan are actually folk heroes. Although they are illegal, go to any market in Michoacan and you can find CDs with homegrown narco-corridos, ballads that glorify drug dealers and the drug trade. Hear one of the songs: