Accessibility links
Green Burial Movement Spreads to the Southwest The Green Burial Council announced the nation's first standards for environmentally friendly burials. The regimen, which proscribes embalming, vaults, or metal caskets, has been used in Britain for a decade. Now the debate is whether the methods touted by the council, based in New Mexico, will catch on across America.

The Green Burial Council announced the nation's first standards for environmentally friendly burials. The regimen, which proscribes embalming, vaults, or metal caskets, has been used in Britain for a decade. Now the debate is whether the methods touted by the council, based in New Mexico, will catch on across America. 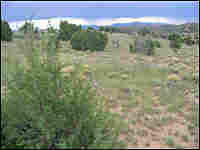 A green burial site is planned for this area in the Galisteo Basin Preserve near Santa Fe, N.M. Unlike conventional cemeteries, the landscape will not change after bodies are buried here. Ted Robbins, NPR hide caption 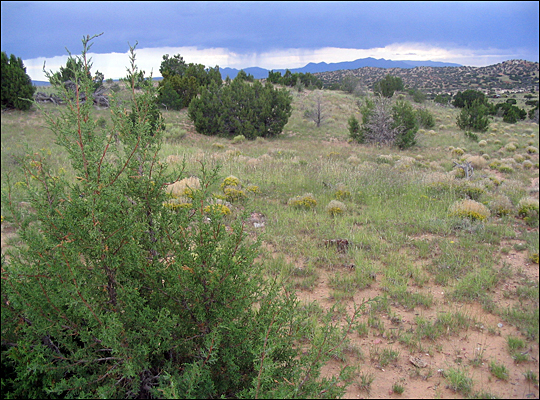 A green burial site is planned for this area in the Galisteo Basin Preserve near Santa Fe, N.M. Unlike conventional cemeteries, the landscape will not change after bodies are buried here.

As baby boomers age, they're changing many American customs, including the rituals following death. Two decades ago, 15 percent of Americans were cremated after dying. Today, that number has doubled. And there are more options ahead, including what's called green burial.

TED ROBBINS: The final season of the TV series Six Feet Under - Owners of the Fisher funeral home are trying to figure out how to keep the business healthy. Nate Fisher, played by Peter Krause, has an idea.

(Soundbite of "Six Feet Under")

Mr. KRAUSE: (As Nate Fisher) No caskets, no toxic chemicals to leach into the soil. I just know that when I die, please wrap me in a shroud, plant me next to a beautiful tree so that nobody can build a mini mall there.

ROBBINS: That works for Joe Sehee. Sehee is a former Jesuit lay minister who is now director of the Green Burial Council. It's headquartered in Santa Fe, New Mexico, near Sehee's latest project.

Mr. JOE SEHEE (Green Burial Council): We are in the middle of a 10 acre burial ground in the Galisteo Basin Preserve.

ROBBINS: Well, right now it's a proposed burial ground. When bodies or ashes are put here, the burial ground will be left as it is, a classic New Mexico landscape, foothills dotted with pinion, juniper and wildflowers.

Mr. SEHEE: There will be no watering of grass and trimming of shrubs. We want to protect this permanently and where possible do ecological restoration. Remove invasive species and propagate native ones.

ROBBINS: No elaborate grave monuments, no embalmed bodies, no vaults, no fancy caskets. There's actually been little research on the effects of embalming fluid once it's in the soil, but Green Burial does conserve resources - water for lawns, hard wood for caskets and in this case, land.

Part of the cost for burial at Galisteo Basin will go towards preserving 1000 acres around the site. Santa Fe resident Brad Belmer(ph) was interested enough to come look at the site as a possible resting place for himself and his wife.

Mr. BRAD BELMER: I was just so surprised to hear that it was even legal to do that, to have green burials, because as far as I knew, it was a law that you have to be put in a box and put six feet under.

ROBBINS: It actually is the law in New Mexico that you have to be buried six feet down. Federal law says only that a body has to be refrigerated or embalmed if its not buried or cremated within 24 hours. Otherwise, most modern burial customs are just that - customs or cemetery rules. For instance, vaults exist only to keep the ground from collapsing when equipment rolls over it.

Joe Sehee points out that before 1860, people were buried, well, green for thousands of years.

Mr. SEHEE: It was really with the advent of embalming used during the Civil War to transport soldiers that really changed things in this country and really brought about the death care industry.

ROBBINS: A multibillion dollar industry that's in trouble. Ron Hast publishes Mortuary Management and Funeral Monitor magazines. He says the industry is already dealing with the existing trend away from elaborate ritual.

Mr. RON HAST (Publisher): It certainly is causing funeral homes to close pretty rapidly. People are looking for simplicity. You don't see three limousines and two nights of visitation and all this kind of thing anymore. You see that rarely all through the United States.

ROBBINS: The death care industry has also had to adapt to the popularity of cremation. But cremated remains can be scattered just about anywhere. Bodies have to be taken to burial sites and there are only around a half dozen green burial sites in the U.S. So Ron Hast says it's just a niche market.

Mr. HAST: You need to be reasonably close to the audience that you're trying to attract. People aren't going to drive 500 miles or 300 miles or 100 miles. Fine for those who want it, but is it going to change the way people are going? Absolutely not.

Mr. SEHEE: It has been a niche market and I think that needs to change.

ROBBINS: Joe Sehee admits a lot more locations need to be available before green burial is anywhere near as popular here as it is in, say, Britain, where there are 200 sites. In time, he thinks the idea will appeal to eco-conscious baby boomers.

Like Nate Fisher, perhaps. In one of the last episodes of Six Feet Under, he did die. Nate was buried in a forest preserve in a shroud with a rock marking his grave.