Accessibility links
'King's Men' a Masterful Retelling of an Old Favorite All the King's Men is a Hollywood remake that may be even better than its Oscar-winning predecessor of 1949. Sean Penn, Jude Law and Kate Winslet star in this wrenching tale of populist politics based loosely on the life of Louisiana Gov. Huey P. Long.

Listen
'King's Men' a Masterful Retelling of an Old Favorite

All the King's Men is a Hollywood remake that may be even better than its Oscar-winning predecessor of 1949. Sean Penn, Jude Law and Kate Winslet star in this wrenching tale of populist politics based loosely on the life of Louisiana Gov. Huey P. Long. 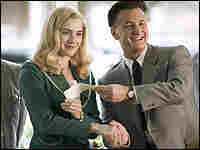 Kate Winslet as Anne Stanton and Sean Penn as Willie Stark in 'All the King's Men.' Columbia Pictures hide caption

He made his name in the marshes and backwaters of Louisiana. Now the state's legendary Governor Huey P. Long is getting the big screen treatment again in the remake of All the King's Men. It opens today in theaters across the country. And although audiences don't always look kindly on remakes, Los Angeles Times and MORNING EDITION film critic Kenneth Turan says this movie may change some minds.

KENNETH TURAN: All the King's Men is a familiar story three times over. We know it from the life that inspired it, that of Louisiana politician and populist tornado Huey Long. We know it from Robert Penn Warren's Pulitzer Prize-winning novel that took Long's life as its starting point. And we know it from the film version, which won the Oscar for Best Picture in 1949.

Writer-director Steven Zaillian's new version, starring Sean Penn, Jude Law and Kate Winslet, is equally impressive. But its accomplishments come against longer odds than you might think. That's because Zaillian, himself an Oscar winner for the Schindler's List screenplay, has given us an uncompromising film of undeniable moral seriousness. Its emphasis on human frailty, the death of dreams and wasted potential is far from business as usual, even for quality Hollywood filmmaking.

(Soundbite of movie “All the King's Men”)

Mr. SEAN PENN (Actor): (As Willie Stark) You gonna tell me you work for me for love?

TURAN: All the King's Men is a somber film, made with the full weight of studio craft and skill. The story is of the rise and fall of charismatic populist governor Willy Stark, played by Penn.

(Soundbite of movie “All the King's Men”)

Mr. SEAN PENN (Actor): (As Stark) Listen to me. Listen here. If you don't vote, you don't matter. And then you're just as ignorant as them in the city say you are, while they steal every last nickel out your pockets saying, thank you, please.

TURAN: This examination of the uses and abuses of political and personal power has a strong sense of drama, and even touches on tragedy. More daring still, this film makes few concessions to the audience in terms of conventional emotional satisfaction. There is an austerity to writer/director Zaillian's conception, but that ensures that the fate of the characters have a weight that stays with you well after the film ends.

Perhaps the most remarkable thing about All the King's Men is how contemporary so many of its issues seem. Still relevant is the classic question of means and ends, the validity of Willy Stark's insistence that good can always be made from bad. Even more persistent is the question of who, if anyone, in American life speaks for the poor and dispossessed, a question that was last raised, ironically, when Hurricane Katrina hit New Orleans. When Sean Penn's Stark cries out to his constituency - your will is my strength, your need is my justice - he is striking a chord that may yet be heard again.

NEARY: The movie is All the King's Men, a remake of the 1949 movie that won an Academy Award. Kenneth Turan reviews movies for MORNING EDITION and the Los Angeles Times.