Commentator Clarissa Myrick-Harris, who you heard in the last segment, shares her thoughts about the 100th anniversary of the Atlanta riots. She says she'll commemorate it by educating others.

The word sankofa from the language of the Akon(ph) people of West Africa explains it best. We must go back and reclaim our past so that we can move forward with an understanding of why and how we came to be who we are today. Our past is clouded by racial intolerance, cultural insensitivity and attempts of one group to suppress and exploit another.

All these things are manifestations of fear; fear of the unknown, fear of the progress of the other, fear of losing control, fear of being kicked to the curb or even annihilated as the world moves forward. In the case of the 1906 Atlanta race riot, we know that the local white press, including the Atlanta Journal and Constitution, concocted stories about a negro crime wave.

In reality at the turn of the 20th century, the white builders of the new south in particular, feared the political and economic power and potential of African-Americans who had gone from being chattel to citizens, from being property to property owners in only four decades.

The yellow journalism of the time addressed all of these fears by criminalizing black men, vilifying black women and attempting to scare white women into submission.

During the 1906 Atlanta Race Riot Centennial Remembrance Weekend, September 21st through the 24th, there are many such opportunities to learn the lessons. We must continue to remember long after this weekend is over, just as we must also remember the many other acts of racial terrorism that stain our country's history.

Attempts to forget, bury or minimize the atrocities in our past will guarantee that new, perhaps even more horrific events will occur in our future. Let's look back now. Learn the lessons so that we can begin to move forward as more sensitive and humane people.

CHIDEYA: Clarissa Myrick-Harris is co-curator of the exhibit, Red Was the Midnight: The 1906 Atlanta Race Riot. To see photos from this period and to hear what one historian says about the riot in his book, Negrophobia, go to npr.org.

Why a Race Riot Erupted 100 Years Ago in Atlanta 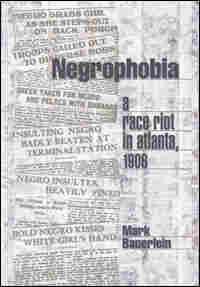 Mark Bauerlein is an English professor at Emory University and the author of Negrophobia: A Race Riot in Atlanta, 1906. Mark Beuerlein hide caption

In an interview with npr.org, Mark Bauerlein, professor of English at Emory University discusses the repercussions of the 1906 riots on the city of Atlanta, and the motivations behind the events.

Atlanta was undergoing major growth [as it] transformed from an agrarian to an industrialized economy. Atlanta was a flagship city -- a financial center, a railroad center, part of the New South. Political leaders envisioned it as an industrial center that would rival the Northeast.

These Southern leaders saw Atlanta as having economic resources that the North did not have. This meant cheap land, but it also meant a large, compliant labor pool.

At the time, blacks are part of a labor pool that is part of a caste society and they occupy the bottom caste. In other areas, like the North, there are labor riots, progressive organizers, union agitation, leftist groups trying to activate labor as a movement. Because of the history of slavery, there isn't as much labor agitation in the South.

The New South vision says to Northern capitalist investors, "Here in the South, we have cheap land and cheap labor -- a labor pool ready to work and ready to build profits and encourage northern investments."

Did all white Atlantans have a negative image of the black population?

There is paternalism that looked at the black race as inferior but capable of being improved by guidance and the example of white people -- "We will civilize them." And there is negrophobia -- which looks upon black men, in particular, as essentially degenerate, fundamentally vicious, prone to vice, prone to lust, as not quite responsible because they haven't developed morals, [which] sees the black man as a dangerous animal. Negrophobes think the black man can't be improved, but he can be controlled. That's where you get ideas like the chain gang, a system to get itinerant black men off the streets by putting them in jail, putting them to work for the state, building roads, doing work but remaining incarcerated. The idea is that, "At least we're teaching them to do a good day's work, giving them food." This is the lens that negrophobes had.

What did the local newspapers say about racial issues?

There was intense competition among newspapers, [with] four white papers in town. What builds up circulation more than race and sex, sensational stories of black men preying on white women? Editorials warned white women to stop sitting in the front seat of their carriages with their black drivers because a black man on the street who sees them will "get ideas."

What they didn't say was in any city going through change, with itinerants coming in, you are going to have cases of rape. There were also cases of white men raping white women. White men raping black women was not considered a crime at the time.

Tell us about the black middle-class at this time.

Atlanta had the largest black middle-class in America. There were also a few wealthy black Atlantans. The mob trashed it all -- they went after businesses and barbershops and shot the barbers down. They weren't after just the itinerant figures, they went after nice houses, even invaded some of the universities.

Atlanta had the largest concentration of black colleges in the world, a large group of black intellectuals. When riots happened in other cities in the South, Atlanta leaders boasted that they "don't happen here because here we have black teachers."

Was the Atlanta riot about racism or something else?

It had a lot to do with mob psychology. People might have gone into it for different reasons. A guy who lost his job and sees black waiters working in a nice restaurant, a guy whose girlfriend left him for another man, and somehow a racial issue got mixed up with that, or a guy [whose] father carries a crutch with him because he lost a leg at Shiloh, blaming slaves and not the North for the Civil War. Any number of forms of resentment can build up and get attached to a scapegoat.

What were the long-term repercussions for the city, and for black America?

One repercussion for the city was to create safety measures to make sure a riot would never happen again: visits by city leaders to black congregations to promise more protection; censure of the most sensationalistic newspaper, the Atlanta Evening News, which went out of business a few weeks later; committees of white and black leaders that met regularly to discuss race relations. These [measures] enabled Atlanta to make the race issue go largely underground. The activist black intelligentsia were too demoralized or fearful (legitimately so) to rouse much further protest.

For black America, what the riot wrought was, among other things, a beginning of the decline of Booker T. Washington's vision of "go slowly" accommodationism. In a few years, the NAACP would be formed, black activism would gravitate northward and Washington's influence would decline.

What did it mean that Booker T. Washington's influence waned?

The Washington formula was to work hard, save some money, keep your yard neat, impress your employer. His formula broke down with the Atlanta riot. They went after everyone, including black citizens who did all these things. Booker T. Washington was a famous, powerful, fascinating, brilliant figure, but in the wake of the riots, his philosophy sounded empty. A more militant version of advocacy seemed to become more attractive.

What do people need to understand about the 1906 riot?

We live in a nation of historical forgetfulness. Young people don't know the basic facts of the founding, the Progressive Era or the Cold War. They live in the present. Atlanta, too, emphasizes the present, and that goes for black leadership as well as white leadership. We have obscured our heritage, the bad and the good, and live with superficial, pop-culture images and sounds from the past. A society is only as thoughtful and deliberative as is its historical memory, and these days we are failing.