Senate Republicans have reached a compromise with the Bush administration over rules governing the treatment and interrogation of detainees held as international terrorism suspects.

Military law professor Gary Solis, who formerly taught the laws of war at the U.S. Military Academy at West Point and also served as a Marine Corps judge advocate, talks with Mike Pesca about the details of the deal.

What's in the Terrorism Detainee Bill? 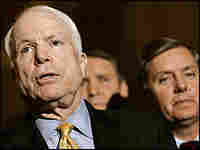 Sen. John McCain (R-AZ), left, and Sen. Lindsey Graham (R-SC) hold a news conference at the U.S. Capitol, Sept. 21, 2006, in Washington, D.C., to announce an accord with the White House over the interrogation of detainees in the administration's war on terrorism. Chip Somodevilla/Getty Images hide caption

After a weeks-long battle, the White House and moderate Republicans in Congress have reached a compromise on legislation that would let the president detain suspected terrorists at CIA prisons and try them at special military tribunals.

The proposed compromise legislation has two major elements. It sets out new guidelines on military commissions -- the tribunals that will be used to try suspected terrorists at Guantanamo Bay -- and clarifies policy with regard to the Geneva Conventions Common Article 3, which prohibits torture. Sprinkled throughout the bill are provisions dealing with access to courts and culpability for war crimes. Here, key points of the bill:

Defendants can't be convicted on the basis of evidence they haven't seen. If classified documents are necessary to prove the defendant's guilt or innocence, the judge will give the defendant summaries or edited versions of the documents.

Hearsay evidence is generally OK in these trials. A judge has to rule that the evidence is reliable and relevant to the case.

The tribunals won't admit evidence obtained through torture. Evidence obtained through coercive interrogation tactics that the Bush administration doesn't consider torture (such as "waterboarding," where a detainee is made to believe he's drowning, or "stress positions," where a detainee is made to sit or stand in a painful position for extended periods of time) may be used under some circumstances.

The bill also addresses statements that were obtained before Congress passed a ban on coercive interrogation tactics in 2005. In those instances, a judge must rule on the admissiability of the statement, determining if it is "reliable and possessing sufficient probative value," and if it serves "the interests of justice."

If the statement was obtained after Congress passed the 2005 ban, the military judge must decide whether it meets the above two criteria and must also find that "the interrogation methods used to obtain the statement do not violate the cruel, unusual or inhumane treatment or punishment prohibited by the Fifth, Eighth and Fourteenth Amendments to the Constitution."

ON THE GENEVA CONVENTIONS

According to the bill, detainees held by the United States at any overseas location cannot file a lawsuit challenging their detention. This wipes out both pending and future lawsuits. The bill also says no one can file a lawsuit claiming a violation of their rights under the Geneva Conventions.

The bill gives the president the power to "interpret the meaning and application of the Geneva Conventions," a phrase that may clash with another part of the bill, which says, "Nothing in this section shall affect the constitutional functions and responsibilities of Congress and the judicial branch."

The bill prohibits "grave breaches" of Common Article 3 of the Geneva Conventions. That includes "cruel or inhuman treatment." But it's unclear whether the definition of cruel or inhuman treatment encompasses waterboarding, stress positions, hypothermia, and the other interrogation tactics that the CIA has reportedly used against terrorism suspects.

Sen. Lindsey Graham (R-SC) said waterboarding "is a technique that we need to let the world know we are no longer engaging in." White House National Security Advisor Stephen Hadley wouldn't discuss specific interrogation tactics but said the CIA interrogation and detention program will be able continue under the proposed legislation.

The compromise legislation would narrow the range of offenses prohibited under the War Crimes Act. This would protect civilians (such as CIA interrogators and White House officials) from being prosecuted for committing acts that would have been considered war crimes under the old definition. The change is retroactive to 1997, which means any crimes committed since 1997 would be prosecuted under the new standard, not the old one.