Accessibility links
Hearing History in Shostakovich's Fifth Symphony For Marin Alsop, music director of the Baltimore Symphony beginning in 2007, the centennial of Dmitri Shostakovich's birth presents an opportunity to explore the complexity and lesser-known pleasures of the legendary Russian composer's music. 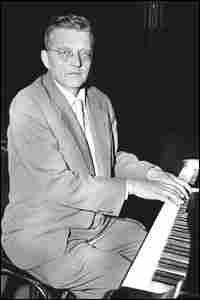 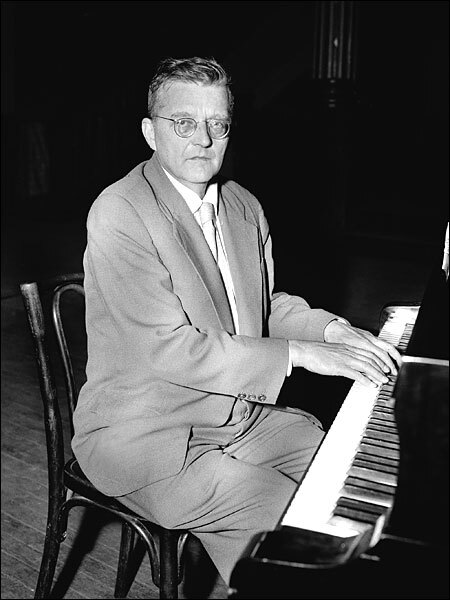 Soviet composer Dmitri Shostakovich poses during a recording session for the French record label Pathe Marconi in Paris, May 23, 1958.

Scroll down for a list of three must-have Shostakovich recordings.

Hear samples of the music:

Aside from the obvious marketing hooks, the 100th anniversary of the birth of Russian composer Dmitri Shostakovich this week gives us an opportunity to delve more deeply into the less-explored music and dimensions of the man.

In a world where soundbites dominate and categorization abounds, Shostakovich presents a challenge to define. It was his fate to be a monumental creative talent living in the Soviet Union — one of history's most restrictive, whimsical, and repressive regimes. Not surprisingly, then, his life and work are marked by paradox and ambiguity.

For me, nothing expresses that duality and struggle as much as his Symphony No. 5, written at the height of the Stalinist purges of 1937, when millions of Soviet citizens were forcibly relocated, exiled and/or killed outright. Shostakovich was emerging from a period of total musical banishment with his fifth symphony, calling it "a response to my critics."

Against that backdrop, how can we not listen to the work without reading between the notes? Is the blatant patriotic fervor emblematic of Shostakovich's desire to please his comrades, or a genuine outburst of love for his homeland? Or is it an extreme form of irony, ingeniously straddling both sides of a dangerous abyss?

From the opening battle between upper and lower strings to the complete desolation and apathy of the violin melody a few bars later, imagining Shostakovich's personal viewpoint can't help but have an impact on how to interpret his music in a heightened way.

For example, how fast should it be played? At the very end of the symphony, Shostakovich's original tempo marking is quite slow. But Leonard Bernstein doubled the tempo in his recording with the New York Philharmonic, and Shostakovich thought it worked very well.

For me, this is a defining moment in the symphony, determined by the entirety of the last movement, and even the journey of the entire piece. I hear the last movement as a gradual acceleration of forces, an increasing sense of hysteria and loss of control until things break down and the fanfare (like the theme) becomes almost nightmarish in sound.

For me, this is an important trasformation. It signals a moment of weakness and affects how I approach the coda — the sort of "summary statement." Shostakovich ends by offering an opening for hopefulness, for a certain nobility in survival. Therefore, I take a tempo that is not too fast nor too slow, neither giddy nor funereal.

I think it's only natural that Shostakovich has become a receptacle for people's polarized political viewpoints. Revisionist, anti-revisionist, comrade, revolutionary? Perhaps this anniversary year will afford us a chance to look at Shostakovich not only as the complex, conflicted being he must have been in that environment, but also purely as a human being who possessed a wonderful sense of humor and a lightness of being.

Just listen to his arrangement of "Tea for Two" or his jazz suites. These are not often celebrated aspects of Dimitri Shostakovich, but perhaps we will have time this year to avoid the predictable in exploring this profound artist. 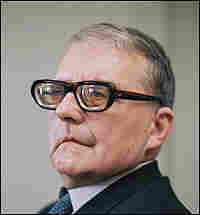 Conductor Valery Gergiev: His Lighter Side

Immersing yourself in Dmitri Shostakovich's complete works would take days, but familiarizing yourself with his music should take no more than an afternoon. And it will not be painful.

Simon Morrison, a Russian music scholar at Princeton University, says Shostakovich "was a composer interested in social discourse. He sought to engage, rather than alienate, his audiences."

Morrison picks three of the most engaging Shostakovich pieces, noting that "these three works, clustered relatively close together in Shostakovich's career, represent the different facets of his general style."

The Composition: Third String Quartet in F Major, 1946 — "A typical early piece," says Morrison, noting that there's "almost an element of ugliness built into the texture" of the music.

The Composition: Fifth Symphony, 1937 — A "landmark heroic period piece" that was Shostakovich's attempt to "conform to Soviet-era symphonies," says Morrision. The traditional structure and instrumentation evoke a "narrative representation of a hero's life and death."

The Composition: Piano Trio in E Minor, 1944 — A "masterpiece of compelling dark somber melodic lines" that suggests a "tragic, internal depression," says Morrison. He notes that the melody is beautiful and the texture beguiling.