Accessibility links
A Reporter's View of 'Imperial Life' in Iraq Rajiv Chandrasekaran covered Iraq for The Washington Post. His new book describes the Americans who went there with idealistic, often uninformed attitudes towards rebuilding a nation. The book is called Imperial Life in the Emerald City: Inside Iraq's Green Zone.

Listen
A Reporter's View of 'Imperial Life' in Iraq

Rajiv Chandrasekaran covered Iraq for The Washington Post. His new book describes the Americans who went there with idealistic, often uninformed attitudes towards rebuilding a nation. The book is called Imperial Life in the Emerald City: Inside Iraq's Green Zone. 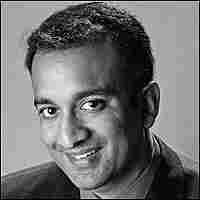 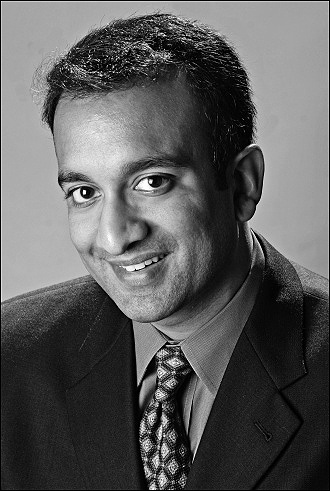 Rajiv Chandrasekaran was the newspaper's Baghdad bureau chief at the time of the U.S. invasion. He's now an assistant managing editor.

This is WEEKEND EDITION. From NPR News I'm Scott Simon.

In post-war Iraq, the cafeteria in the Republican palace under the Coalition Provisional Authority served pork chops, hot dogs and sausage, but almost never any hummus. Because of stipulations in government contracts, all food had to be shipped in from approved suppliers, so the cool cucumbers and plump local tomatoes were also never served alongside the bacon cheeseburgers.

Rajiv Chandrasekaran, who was the Washington Post bureau chief in Baghdad, began to find this symptomatic of life in the Green Zone, where American occupation and recovery efforts were headquartered. Mr. Chandrasekaran, who is now assistant managing editor of the Post, has written a new book, Imperial Life in the Emerald City: Inside Iraq's Green Zone, and he joins us in our studios. Thanks very much for being with us.

SIMON: And you found that cafeteria scene emblematic in many ways. Did the Iraqi employees who work for the CPA begin to have strong feelings about the menu?

Mr. CHANDRASEKARAN: There was grumbling, but they didn't really have a way to redress those. When concerns were brought to the folks at Halliburton who were responsible for running that dining hall, they were sort of brushed aside. It was emblematic of the cultural sensitivity, or lack thereof, that was demonstrated by people who were running the Green Zone.

SIMON: And to a number of abiding Muslims, eating in a place that serves pork is...

Mr. CHANDRASEKARAN: It's very offensive. Pork is prohibited for many devoted Muslims. And simply sort of taking food from the same buffet line that has pork in it is seen as something that's unclean.

SIMON: Who worked for the CPA, as a generalization, in that first very critical year?

Mr. CHANDRASEKARAN: It was a whole motley assortment of Americans. There were some diplomats, there were some military officers, but there were also an awful lot of people who came in not because they possessed any great skill in the language of Arabic or experience in the Middle East, but they were recruited because of their political fidelity, their loyalty to the Bush administration and the Republican Party. There was a whole system of recruitment from Republican offices on Capitol Hill, from conservative think tanks, from other parts of the Bush administration. And just to ensure that they would be loyal, some of them were questioned in the pre-deployment process in interviews at the Pentagon and they were asked questions like, did you vote for President Bush in the 2000 election? And some have told me that they were even asked what their views on Roe vs. Wade were. And you know, what does that have to do with the reconstruction of Iraq?

SIMON: Well, there was a concern in the administration, wasn't there, that people who might have had longer careers in the State Department had worked to actively undercut U.S. policy, and they wanted people who believed in what the U.S. policy was.

Mr. CHANDRASEKARAN: That's right. Veteran Arabists were deemed insufficiently committed to this notion of democratizing the Middle East. They were seen as people with an old way of thinking, people who supported the authoritarian regimes there, and so the U.S. effort in Iraq needed new blood, new perspective, and not those old hands who had some experience in the region. They would bring folks who really didn't have any preexisting biases, at least that was the argument. The problem was, was that those people also didn't have much experience in the region.

SIMON: Let me ask you about the figure of Ambassador Bremer, because personally he obviously is perhaps the major figure in your book. Some phrases that people use to describe him - tireless, disciplined, the kind of man who inspires confidence. What were some of the drawbacks to those qualities?

Mr. CHANDRASEKARAN: And let me tell you, Scott, I was not one of these people who started out thinking Bremer was the wrong man for the job. I also thought that he would listen to Iraqis. He would be consultative, that he would be able to marshal the necessary resources. The problem is that he became something of a control freak. He surrounded himself with a small group of advisors. He wanted to sign off on things that...

SIMON: He insisted to people in Washington, in the State Department, in the White House, if you want me to run this, you let me run this.

Mr. CHANDRASEKARAN: Exactly. He didn't want to be managed, as he said, with an 8,000 mile screwdriver. And initially people in Washington were content to let that happen, because there was this feeling that there was a vacuum of power and authority under Jay Garner, and Bremer was the take-charge guy. He'll be the quarterback who'll go on the field and call the plays as he sees them, not work from some sort of scripted playbook or have to turn to the coach on the sidelines. But the problem was, governing and reconstructing Iraq is an incredibly complex task.

People of a certain generation remember a good life. They remember not wanting for electricity or clean water or working hospitals or top quality universities. And the Iraqis felt that upon the arrival of the Americans things would improve. It's a phenomenon that General David Petraeus, who commanded the 101st Airborne, used to call the man on the moon phenomenon, that the United States was a country that put a man on the moon, certainly they can turn my lights on.

SIMON: I find it significant that you and I met in Baghdad in a darkened hotel when there wasn't any power, because you would hear Iraqis say, this is the strongest country in the world that defeated Saddam in 27 days, why can't they turn the lights on?

Mr. CHANDRASEKARAN: It fueled many conspiracy theories. And when the first wave of American engineers showed up, they went to some of these power plants and they found these decrepit monstrosities with 1950s-era control panels, and they'd walk through and find leaky valves, and everything was a mess. And they expressed surprise. But all of this could have been known before the war. There were U.N. development experts in that country who were going to power plants. The CIA has satellite imagery of Iraqi cities at night and could see how well lit they were, or not. The idea that Iraq's infrastructure and the great problems with it were only discovered after the war is a bit of a fallacy. Had we wanted to know about this, we could have. And I felt in those early months the lack of electricity spawned a greater degree of anger toward the Americans than seeing American checkpoints or hearing about accidental shootings or any of the other things.

SIMON: Now, Ambassador Bremer at one point made a calculated decision that when they began to repair the electrical grid of Iraq, that he was going to do it in a totally equitable manner, which is to say that other parts of the country, particularly where Shia lived, in the southern part of the country, had not received as much electricity as they had in the capital, in Baghdad. And he thought that was wrong. So he decided to distribute what stores of electricity there were more equitably. What was the practical effect of that?

Mr. CHANDRASEKARAN: The practical effect was that Baghdad, the capital, the center of opinion, wound up with about half as much electricity as it had before the war. So people who used to get 20 to 22 hours a day were now getting 8 to 10 to 12 hours. And it really angered people. And as we see now, with the decision by the Pentagon to concentrate U.S. forces on Baghdad first, because they feel that securing Baghdad is key to securing the rest of the country, that opinion in the capital shapes it across the country, we should have realized this back then and we shouldn't have disadvantaged the capital. And the few extra hours of power a day that were given to people across the Shiite south never really won us any friends. It just wound up angering a lot of people in a place where you didn't want to anger them.

SIMON: You seem to think that U.S. policy missed a series of opportunities and one overall great opportunity during the first few months.

Mr. CHANDRASEKARAN: The great missed opportunity was to do a better job with governing and reconstructing Iraq. There was a window there of months where had we brought the resources to bear, had we created an Iraqi interim administration that projected to the Iraqis that Iraqis were really in charge and Americans were there to be advisors to help support this administration, but that you had Iraqis slightly more front and center, I think it would have had an enormous difference.

Would this have solved everything? Would it have prevented an insurgency? I don't think so. But I think it would have created a situation on the ground today that's very different from what we are now encountering.

SIMON: Rajiv Chandrasekaran of the Washington Post. His new book is Imperial Life in the Emerald City. Rajiv, thanks so much.

Mr. CHANDRASEKARAN: Always great to talk to you, Scott. 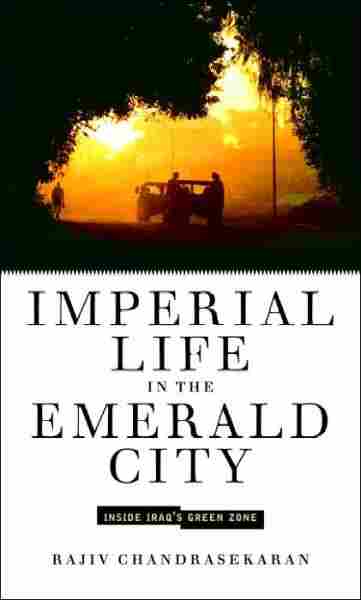