Accessibility links
Vaccine May Eliminate E. Coli in Cattle One likely source of the recent E. coli outbreak in spinach is cattle waste. At the University of Nebraska, researchers are working on a vaccine that would be given to cattle to destroy E. coli before it harms your food. 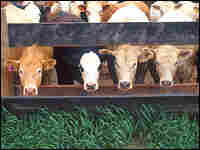 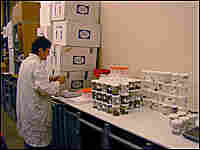 It's not yet clear how E. coli 0157 H7 contaminated spinach during the recent nationwide outbreak. One likely source of the E. coli bacterial strain is cattle waste, which could have tainted irrigation water used to grow the spinach.

Cattle can tolerate the bacteria with no problems, but E. coli can cause severe illness and even death in humans. At a University of Nebraska research feedlot near Lincoln, researchers are now working on an E. coli vaccine that would be given to cattle instead of humans.

After graduate students collect manure samples, technicians in a Nebraska laboratory prepare them for analysis. Rod Moxley, a veterinary science professor, says they use a technique that helps them home in on E. coli 0157.

Since clinical trials began in 2002, researchers have tested some 25,000 head of cattle from across Nebraska. Epidemiologist David Smith says the vaccine reduces the number of animals with E. coli bacteria in their manure by 60 percent to 70 percent. Coupled with what people in the industry call "interventions" -- safety practices such as washing hides and carcasses after slaughter -- Smith says the vaccine could significantly reduce the risk of contamination to the food supply.

"There may still be organisms coming into the plant -- we're not eliminating it -- but at a much lower level so that the interventions that take place post-harvest have an opportunity to be effective," he says. "They don't get overwhelmed."

Funding for the research comes from several sources, including the U.S. Department of Agriculture, the cattle industry, and the Ontario-based biotechnology company Bioniche Life Sciences Inc. President and CEO Graeme McRae says the company has invested about $15 million in research and development, and will spend at least $50 more on marketing. He hopes to see every herd of cattle in North America receive the vaccine.

But Animal Science Professor Terry Klopfenstein, a member of the Nebraska research team, says turning the vaccine into a viable product for producers may be a challenge.

"For [the cattle industry], what’s the economic benefit to vaccinating their cattle?" he asks. "There is no direct benefit because the cattle will not gain faster, they’ll not do it more efficiently; the meat won’t taste any better."

Still, Klopfenstein says he thinks the vaccine would ultimately benefit producers by making beef safer, and helping shore up public confidence in the industry.

"It's of benefit to the industry to be reducing the risk of either the meat or where that manure may end up," he says.

Researchers expect to finish their current trial this fall, and will complete their analysis of the data by the end of the year. Officials with Bioniche say the company is hoping to see the E. coli vaccine approved for use in North American cattle as soon as next year.