Accessibility links
Black-Footed Ferrets Fight Extinction Twenty-five years ago today, a dog in Wyoming arrived at its owner's doorstep with a dead black-footed ferret in its mouth. Until then, biologists thought the species was extinct. Today, the species struggles to survive. 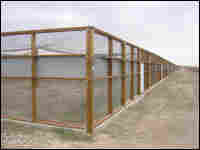 The ferrets that will be released into the wild are put in outdoor "pre-conditioning" pens. A concrete wall extends down into the ground to keep them from escaping. Jeff Brady, NPR hide caption 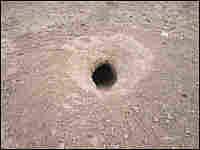 Black-footed ferrets will sneak into prairie-dog holes at night, grab the prairie dogs by the throat and suffocate them. After eating them, they take over the holes as their own. Jeff Brady, NPR hide caption

Twenty-five years ago today, a dog in Wyoming arrived at its owner's doorstep with a dead black-footed ferret in its mouth. Until then, biologists had thought the species was extinct.

Within a few years, biologists found 17 more ferrets and started a captive-breeding program. There are now hundreds of these ferrets in the wild today, but they are still considered one of the most endangered mammals in North America.

The National Black-footed Ferret Conservation Center, located about 60 miles north of Denver, is trying to save the species. The center breeds several hundred kits, or infant black-footed ferrets, every year. The ferrets, with their long bodies and mottled fur, are often mistaken for pets.

"A lot of folks confuse them with the domestic ferret," says Paul Marinari, a wildlife biologist with the United States Fish and Wildlife Services. "[But] these guys are a totally different species. This is the only native ferret to North America."

Though native to the region, the ferrets are not comfortable navigating the world outside their breeding cages. At 4 months old, most of the kits are released onto selected prairies throughout the region, where they spend a month in large cages to acclimate them to their surroundings. Though biologists have tried to show the ferrets which predators they should fear, the approach has not always been effective.

"We had this thing called Robo-Badger. It was this mechanized badger that we would drive around the pens to try and scare the ferrets," says Marinari. "And, you know, when the ferrets started riding on the back of the badger, we kind of thought, 'Well, let's move to something else...'"

Inside the conservation facility, Marinari points to a ferret poking its head up out of plastic tubing on the bottom of its cage.

"She’s doing something -- what we call periscoping," he says. "And that's a behavior that you often see in the wild, where a ferret would pop its head up out of a prairie-dog burrow and, basically, turn around and take in the entire scene, like a submarine periscope."

Ferrets live in prairie-dog burrows. Ranchers killed many of these prairie dogs 70 years ago to make way for grazing cattle, and both the prairie dog and the ferret received protection under the Endangered Species Act. Prairie dogs, however, have recovered much more quickly than ferrets. Ranchers now say there are too many prairie dogs on the plain.

Kevin Kruse grazes cattle on national grasslands in the South Dakota Conata Basin. He says the prairie dogs have changed the ecosystem.

"It looks more like a parking lot than it does like a grassland," he says. "When the wind blows hard, the dust rises in the air -- sometimes 50 to 100 feet."

The Forest Service, which manages the grassland, is considering poisoning more prairie dogs to appease the ranchers. Jonathon Proctor, who works for Defenders of Wildlife, an endangered species organization, says this would also destroy the black-footed ferret population.

"If we won't allow an endangered species -- the black-footed ferret -- and its important habitat -- the black-tailed prairie dog colonies -- to survive in this one spot, without destroying them, exactly where are we going to let them survive?" he asks.

The Forest Service is set to decide the prairie-dog-poisoning issue over the next year. Biologists in Colorado, meanwhile, say it will be years before a viable population of black-footed ferrets is established in the wild. 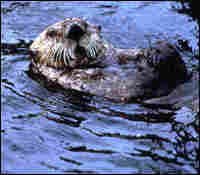 The Southern sea otter was believed to be extinct by the early 1900s. Today, there are 2,200 living off the coast of California. U.S. Fish and Wildlife Services hide caption

It's kind of like Prince's career. Just when you thought he, like, totally disappeared off the face of the Earth -- he releases an album and makes a comeback.

So, too, do some species. The Black-footed Ferret, rediscovered in 1981, and the ivory-billed woodpecker are not the only species thought to be extinct -- only to be rediscovered years later. Exotic varieties of geese, toads and snails also make the list, as does the Madagascar serpent eagle.

Dr. Timothy Male, a senior ecologist with the nonprofit Environmental Defense, which works to restore ecosystems, says it's rare for a species to be thought extinct and then rediscovered throughout an ecosystem.

"More often," he says, "rare species disappear and someone finds a small population, and a heroic effort is taken to save them."

Here are just a few of the species that scientists thought vanished off the face of the Earth, only to make a comeback.

A large freshwater sucker fish (they can weigh as much as 17 pounds) first described in 1869.

Possibly because of: extensive erosion and sedimentation of rivers and streams; damming of migration channels; introduction of flathead catfish, a voracious predator

Found: In 1991, biologists from the Georgia Dept. of Natural Resources discovered the fish in the Oconee River near Toomsboro, Ga.

Current Population: 27,900 artificially-reared fish have been introduced into the Georgia Atlantic slope rivers.

The world's "leggiest millipede," according to the journal Nature

Possibly because of: Scientists with poor eyesight. Only one colony was ever found, in San Benito County in California.

Survivors: 12 millipedes, which exist only in a 0.3 sq. mile area in California.

Possibly because of: hunters, who wanted their luxurious pelts.

Survivors: 2,200 animals off the coast of central and southern California

Possibly because of: urban development and agricultural land conversion

Found: 1992 by research biologists in California

A tiny, aggressive frog living in the jungles of Colombia.

Possibly because of: the deadly fungal disease chytridiomycosis, which is wiping out amphibians in South America