Accessibility links
Teardown Trend Altering Historic Neighborhoods The housing market may be cooling, but teardowns are occurring at a steady pace. The redevelopment trend -- in which smaller, older homes are torn down and replaced with much larger houses -- is going strong in 300 communities in more than 30 states. 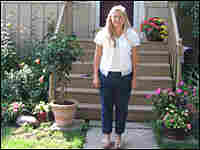 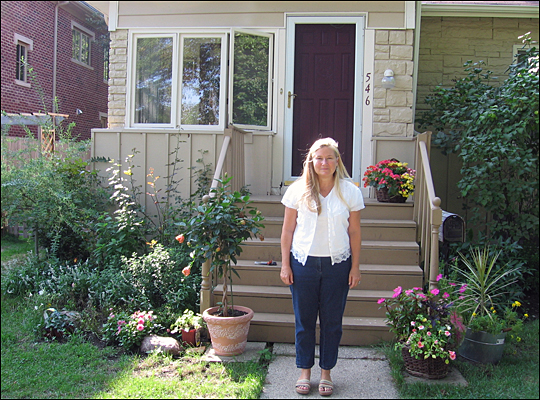 Beth Baxter stands in front of her 1,800-square-foot house in Kenilworth, Ill. 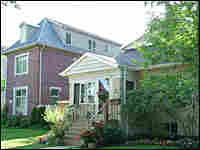 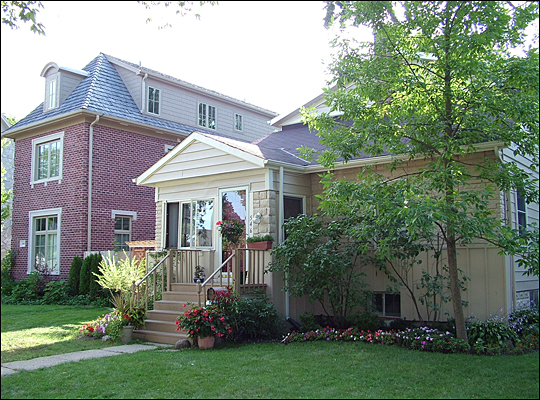 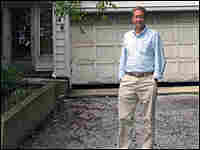 Brian Hickey, president of Xchange Properties, stands in front of an older house in Hinsdale, Ill., that is scheduled for demolition. Cheryl Corley, NPR hide caption 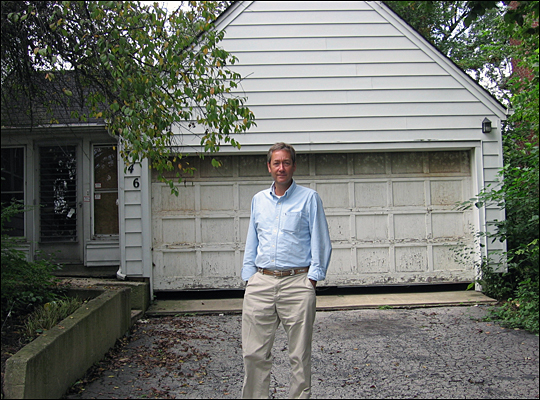 Brian Hickey, president of Xchange Properties, stands in front of an older house in Hinsdale, Ill., that is scheduled for demolition.

The National Trust for Historic Preservation began keeping track of teardowns a few years ago, adding them to its annual list of endangered historic places in 2002.

Trust President Richard Moe says that, since then, the pace of demolitions of older and historic homes has been like a cancer. When the Trust announced its annual list of 11 most endangered historic places earlier this year, it included Kenilworth, Ill., an affluent suburb about 15 miles north of Chicago.

Beth Baxter grew up in Kenilworth, a town with a lot of large homes that were designed by prominent architects during the turn of the 20th century. Ten years ago, she moved back with her family to the west side of town where the houses are more modest and the lots are smaller.

At 1,800 square feet, Baxter's house used to be the biggest on the block. Not anymore. Two new houses were built next door after an older house was torn down. The new houses are 4,400 square feet.

In Baxter's backyard, the view to the right is unobstructed -- her 85-year-old neighbor Evelyn's house is 880 square feet. But to the left, where there once was a huge oak tree, there is now a huge house.

"There are four or five windows that overlook my backyard, where there were none before," Baxter says. "What I lost was beauty, serenity of my own yard, privacy."

There are 830 homes in Kenilworth. During the last four years, more than 30 demolition permits have been issued among vigorous and often divisive debate. The town has made some zoning changes -- restricting building heights, for instance. A building commission can delay demolition permits if a house is found to be architecturally or historically significant.

Brian Hickey is the President of Xchange Properties, a real estate firm that deals exclusively in teardowns. He started the company five years ago and says that infill redevelopment hasn't slowed, even though the housing market isn't as brisk. He says people are simply replacing older homes that are obsolete -- too small and without modern amenities.

That's not all bad news, according to Robert Lang, the head of the Metropolitan Institute of Virginia Tech. Lang says that, for many suburbs, the teardown phenomenon is actually a benefit.

"A lot of suburbs have nothing other than residential real estate in which to draw taxes from locally," Lang says. "So putting a bigger house on an existing lot and having the taxes reflect that is a stimulant to the municipal budget. And it also shows these places are being invested in."

It's suburban gentrification, which prevents sprawl, Lang says. And for those who think zoning changes are the answer, Lang says that type of public policy may soon become too costly.

"Because there is legislation all around the country that argues if you downzone a lot, that it's a takings, which means you have to pay compensation to the person whose property has been devalued," Lang says.

A handful of western states have such initiatives on their November ballots, and Lang says the legislation could spread. He says some areas are taking a different route, creating private covenants and homeowner associations to determine the shape and look of neighborhoods. In Kenilworth, officials say they're still working to find a creative solution that balances the interest of property owners and preservationists in the teardown debate.