Accessibility links
Diana Krall: 'From This Moment On' Jazz pianist and singer Diana Krall has become a favorite of jazz fans and critics worldwide. But musician and Day to Day contributor David Was finds her latest album less than satisfying.

Listen
Diana Krall: 'From This Moment On' 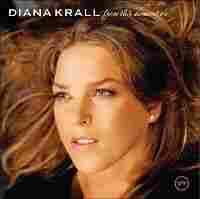 'It Could Happen to You'

'I Was Doing Alright'

Diana Krall is the undisputed superstar of jazz-inflected singers in the last decade or so, and her new album on Verve, From This Moment On -- mostly standards done with big-band arrangements -- is a return to her usual form.

In 2004, she took a wobbly excursion into singer-songwriter territory under the influence of her singer-songwriter husband, Elvis Costello. The couple is expecting twins this November, which might slow her torrid creative pace just a hair.

Krall took the jazz world by the horns back in the mid-1990s, when her cool, understated approach to singing combined with her femme fatale looks and manner to make her the darling of audiences too young to remember names like Billie Holliday and Ella Fitzgerald. She was, of her generation, the closest in spirit to those august figures, even if her initial strength was as a pianist, not a vocalist.

In that sense, she can be likened to Chet Baker, the hard-living trumpeter who became similarly popular in the '50s with his whispery vocals and restrained sense of swing. Both are instrumentalists who added singing to their repertoire later. They make up for their modest technical gifts with a soft, breathy, sensual sound and persona. Even though she is an honest woman now, the photos of Krall on her Web site have her wearing heels in bed and looking sweetly seductive, a marketing ploy she is reportedly not enthusiastic about.

Her mesmeric presence is undeniable in person, but her approach to vocalizing in the studio strikes me as comparatively formal and tentative. She makes phrasing decisions on the fly as a proper improviser might, but she can't see or hear two or four bars ahead, as a more architecturally-minded singer like Sarah Vaughan did.

The opening track, "It Could Happen to You," finds Krall stretching out pronouns and participles as if they merited special musical attention -- rather than making invention enhance expression, as instrumentalists like John Coltrane and Miles Davis did so eloquently.

In 1994, I witnessed a fledgling Ms. Krall recording a guest vocal on an album by alto saxophonist and arranger Benny Carter. At age 87, he easily had the most modern ears in the room, and took her to task for singing a phrase with a flatted fifth in it -- a cliche in the jazz idiom for many decades. "Don't go to that note," he said to her tersely. "That ain't hip anymore. Everybody plays that note." Busted by an octogenarian for sticking too closely to the playbook -- that must have been a shock!

While Krall might not be the most supple swinger the jazz world has ever known, she instead has a tendency to place her notes before the beat like Sinatra sometimes did -- though certainly not with the same throwaway playfulness that made Frank's approach to song sound effortless and casual, though deceptively so. By comparison, Diana Krall is guilty as charged: possession of an illegal quantity of premeditation and forethought while singing jazz.