Accessibility links
Critics Question Reporter's Airing of Personal Views The New York Times' Linda Greenhouse is considered one of the top reporters on the Supreme Court beat, with a Pulitzer to her credit. Greenhouse recently expressed strong beliefs about issues facing the court, which may complicate her job. 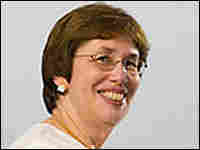 Greenhouse says of her comments criticizing the U.S. government, "Let the chips fall where they may." Stephanie Mitchell/Harvard News Office hide caption

In June, Linda Greenhouse returned to Cambridge, Mass., to be honored at Harvard. Greenhouse, a Pulitzer Prize-winning reporter who covers the Supreme Court for The New York Times, reminisced a bit about the 1960s idealism that defined her college years, and told an audience of 800 she had wept at a Simon and Garfunkel concert when she was struck by the unfulfilled promise of her own generation.

Greenhouse went on to charge that since then, the U.S. government had "turned its energy and attention away from upholding the rule of law and toward creating law-free zones at Guantanamo Bay, Abu Ghraib, Haditha and other places around the world -- [such as] the U.S. Congress."

She also observed a "sustained assault on women's reproductive freedom and the hijacking of public policy by religious fundamentalism. To say that these last few years have been dispiriting is an understatement."

A few weeks after that speech, the Supreme Court knocked down some of the government's assertion of executive powers involving detainees at Guantanamo. And the court will soon hear arguments in an abortion case.

Greenhouse was taking a stand on some of the most contentious issues faced by the court this year. Such charged commentary can be found almost anywhere you turn these days -- except from hard news reporters.

Daniel Okrent was the Times' first public editor -- or in-house journalism critic. He says he is amazed by Greenhouse's remarks.

"It's been a basic tenet of journalism ... that the reporter's ideology [has] to be suppressed and submerged, so the reader has absolute confidence that what he or she is reading is not colored by previous views," Okrent says.

Charges of media bias are routinely thrown at the Times and other media outlets, from both the left and the right. Okrent says he never received a single complaint about bias in Greenhouse's coverage. He wonders whether journalists really need to smother their private beliefs to be fair in their articles.

Back in 1989, Times editors rebuked Greenhouse for marching in an abortion-rights rally in Washington. Greenhouse wrote two dozen stories involving abortion that year -- including one that was published the same day as a Times article about her participation in the march.

Sandy Rowe, editor of the Oregonian and a past chairwoman of the executive committee of the Pulitzer Prize board. Rowe praises Greenhouse's work -- but questions her judgment.

"If she or any other reporter stakes out a strong position on an issue that is still evolving both in society and before the courts, yes, I think that is problematic," Rowe says.

Greenhouse tells NPR, "I said what I said in a public place. Let the chips fall where they may."

Jack Nelson, former Washington bureau chief for The Los Angeles Times, blanches at hearing of Greenhouse's remarks, but agrees with her tough critique of the White House.

"If I was the Washington bureau chief and she was my Supreme Court reporter, I might have to answer to the editors in L.A. for that," Nelson says. "But I would do my best to support her."

Asked if he would defend Greenhouse had she said something he disagreed with, however, Nelson laughed -- and said he would take issue if she had backed Bush policy.

The New York Times ethics policy bans political activism by its journalists and advises them not to say things on television they could not publish in the paper. But it doesn't appear to address this precise situation.

Rowe says the reputation of Greenhouse's newspaper is at stake when the reporter expresses her strong beliefs publicly.

Greenhouse "was asked to speak, as wonderful as she is, because she works for The New York Times. In that situation, any of us has to be careful between our own personal views -- which we no doubt have -- and whether it casts doubt on our own work or on the credibility of the institution we represent."