President Pervez Musharraf rejects claims that Pakistan is a safe haven for Taliban and al-Qaida leaders. Gen. Musharraf, in Washington, D.C., to meet with President Bush and Afghan President Hamid Karzai, recently signed a controversial truce with tribal leaders along the Afghanistan border. 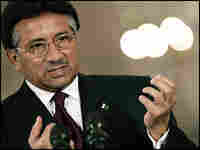 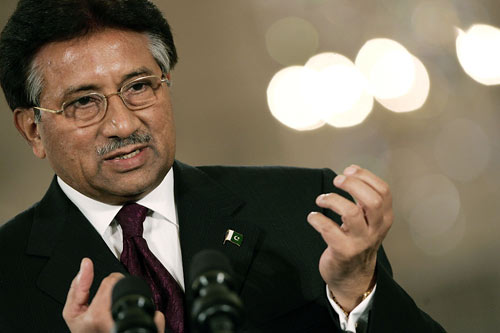 Tonight, at the White House, President Bush will be joined by the presidents of Afghanistan and Pakistan. The dinner conversation should be interesting. Hamid Karzai and Pervez Musharraf have recently traded accusations. They disagree over Pakistan's efforts to hunt down terrorists and the Taliban. This month, President Musharraf came under fire for signing a peace deal with tribal elders who control the wild mountainous territory along the border with Afghanistan. President Karzai, speaking yesterday in Washington, was less than enthusiastic.

HAMID KARZAI: We will have to wait and see. If that is going to be implemented exactly the way it is signed. But generally, we will back any move, any deal that will deny terrorism sanctuary in the tribal territories of Pakistan.

MONTAGNE: We began our conversation with that controversial truce in Pakistan's semi- autonomous territories, a region Musharraf says the Pakistan government, like the colonial British before them, has not been able to govern.

PERVEZ MUSHARRAF: They are extremely, ferociously independent people. Everyone carries a weapon, and they are fighters. They would never allow foreigners to come inside their area. They were uncomfortable, even, with Pakistan Army.

MONTAGNE: Of course, the argument would be that bin Laden and Taliban leaders and fighters are there, and the concern over the peace deal that was signed a few weeks ago with tribal elders in these areas along the Afghanistan border - the concern is that it will allow safe haven for the likes of bin Laden.

MUSHARRAF: When you fear that these leaders are there - and you are saying al-Qaida, and also you said Taliban - right in front of me is the United Nations' Secretary General's report on Afghanistan of 24 September 2006, just a few days back. Just to read excerpts of it, the insurgency in Afghanistan is being conducted mostly by Afghans operating inside Afghanistan's borders. The foot soldiers of the insurgency are Afghans, recruited within Afghanistan - cross-border fighters - many of whom are Afghans drawn from nearby refugee camps. Their funding is through their relationships with their drug mafia there. That is where they are being funded from.

MONTAGNE: Excepting all of that, a study by the Rand Corporation, which has not been released, finds that it is the Pakistan spy agency, the ISI, that is feeding the Taliban with intelligence about U.S. forces; that is directly or indirectly providing training to Taliban forces at various locations inside Pakistan. And this report finds, a long with General James Jones, the NATO commander, that Pakistan is where the Taliban is headquartered - in Quetta.

MUSHARRAF: I want to give a brief answer. This is humbug, and it is all wrong. Quetta is our capital of Baluchistan. There's a provincial government functioning there. There is an Army Corp headquartered there. And there is an intelligence set up jointly by CIA and Pakistan intelligence. If they're all fools that they don't even know that there's a headquarter of Taliban there, it's a pity.

MONTAGNE: Let me ask you about Pakistan intelligence. It's well known historically that the ISI did favor the Taliban, certainly before September 11th. Do you now, as president of Pakistan, have control over the intelligence service, fully?

MUSHARRAF: The people will identify them. What the agreement that we have reached is with the people, with the tribal elders, who have signed an agreement saying that they will not allow al-Qaida or Taliban operating on our side or across the border. What more does the world want?

MONTAGNE: But just on that point - this deal with these tribal elders - it did not call for foreigners to be expelled, or even registered.

MUSHARRAF: We have said there will be no al-Qaida operating in Pakistan or across in Afghanistan. Now, what do you mean by register and this and that? They will not be there. We will kill them.

MONTAGNE: When was the last time you received firsthand information about Osama bin Laden?

MONTAGNE: You are having dinner, President Musharraff, with Presidents Bush and Karzai tonight. What is the most critical thing you would like to hear, or tell them?

MUSHARRAF: I would like to tell them that they must understand ground realities. Let us sit together and strategize how to go about it, using all instruments: military, political, administrative, and reconstruction.

MUSHARRAF: No he does...

MONTAGNE: ...the complexity on the ground?

MUSHARRAF: No, he does understand. I think he is quite clear, and we are trying to change this environment. We, at the government level, there is excellent cooperation going on, and I think the people of Pakistan are understanding that this cooperation is good, but our relationship with the United States, they are suspicious of the United States. The man in the street, yes indeed, that is a problem which needs to be rectified gradually.

MONTAGNE: Is that a dangerous problem?

MONTAGNE: Is there danger for you, your government...

MUSHARRAF: No, there is no danger...

MONTAGNE: ...the stability of Pakistan?

MUSHARRAF: There is no danger at all. The people are massively moderate. They are massively in my support, my personal support. I have a reputation, and I have a standing. And the physical manifestation of this is that I am out since about 18 days and I know that the opposition is talking all kinds of aspersions on me or the government or anything, but I know the people will never come out on the streets. So therefore, there is no danger at all.

MONTAGNE: President Musharraf, thank you very much for joining us.

MUSHARRAF: Thank you. Thank you very much.

MONTAGNE: You're listening to MORNING EDITION from NPR News.