Accessibility links
Iva Toguri D'Aquino Dies at 90 The Japanese-American woman who was convicted of treason for being "Tokyo Rose" died at age 90 Tuesday. Iva Toguri D'Aquino served six years in prison, but she was later pardoned by President Gerald Ford. Melissa Block talks with Ronald Yates, whose stories in The Chicago Tribune helped D'Aquino win her pardon.

The Japanese-American woman who was convicted of treason for being "Tokyo Rose" died at age 90 Tuesday. Iva Toguri D'Aquino served six years in prison, but she was later pardoned by President Gerald Ford. Melissa Block talks with Ronald Yates, whose stories in The Chicago Tribune helped D'Aquino win her pardon. 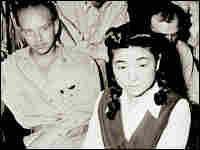 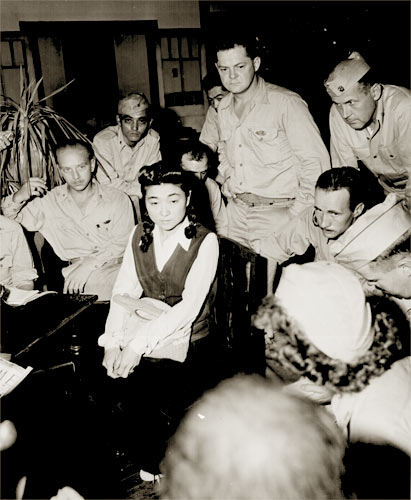 During World War II, when allied forces in the Pacific tuned into Japanese radio they heard female voices on many of the Japanese Army's propaganda programs. Allied soldiers gave all of those female voices a single name - Tokyo Rose.

Unidentified Woman: Hello, you fighting (unintelligible) to the Pacific. How's it? This is after the weekend and we're back on the air strictly under your nose.

BLOCK: Yesterday, the Japanese American woman who was convicted of treason for being Tokyo Rose died at age 90. Iva Toguri served a six-year prison sentence and was later pardoned by President Gerald Ford.

Ron Yates helped win Miss Toguri's pardon with his reports in the Chicago Tribune. He's now Dean of the College of Communications at the University of Illinois at Urbana-Champagne. Thanks for being with us.

Mr. RONALD YATES (University of Illinois at Urbana-Champagne): My pleasure.

BLOCK: Tell us a bit more, please, about Iva Toguri and how she ended up in Japan. Just before Pearl Harbor, she was 25 years old.

Mr. YATES: Yes. She had just graduated from UCLA and her mother asked her to go to Tokyo to represent the American side of the family. Her sister was critically ill, but her mother was too ill to travel so she asked Iva to go in her place. So Iva got on a boat and she got to Japan. And while she's there, the war breaks out and she's trapped in Tokyo. A young Japanese American who doesn't speak Japanese, who doesn't like Japanese food and then just dying to have a hamburger, she once told me.

BLOCK: She does begin working on this Japanese propaganda radio show called the Zero Hour. What was that show, who was running it?

Mr. YATES: The Zero Hour was part of Radio Tokyo. It was set up by the Japanese government to be a show aimed at demoralizing the morale, obviously, of the allied fighting forces in Asia. Iva became part of the show in 1943 and she only did it because the American POW's who were producing the show convinced her to work with them so they can undermine the Japanese propaganda effort. And they told her, do this Iva and, you now, we'll write your scripts. You going to do nothing wrong and you won't get into trouble.

BLOCK: She does get into trouble. She was arrested in 1945. She's later cleared by the U.S. government, but she still is put on trial. Why is that?

MR. YATES: Well, Walter Winchell gets on the radio, and Walter Winchell is a major force in those days, and said that, hello Mr. And Mrs. America and all the ships at sea, the infamous Tokyo rose is returning to America. And of course, that set off a deluge of letters to the Truman administration from Gold Star mothers and others who had lost sons in the war complaining about the fact the they were allowing this traitor to come to United States.

Well, Truman had his attorney general reopen the case, look at it, and of course they saw that she'd been found not to be culpable of doing anything wrong by the occupation forces. But they decided that she was the only American, so they had to go after her. And they went after her and they decided they're going to get her.

BLOCK: Who testified against her?

Mr. YATES: There were two men in Tokyo. A man named George Mitzushio(ph) and another man named Ken Oki. These two men were Japanese-Americans who'd gone back to Japan in the ‘30s. I met them in Tokyo and after several meetings they said it's time for us to come clean. I said, what do you mean? And they said, well, you know, we lied. And then they explained how the Justice Department and the FBI told them this is what we want you to say. That Iva Toguri did speak into a microphone about the loss of ships, which she never did.

BLOCK: Was there also testimony from American soldiers?

Mr. YATES: Yes, absolutely. At her trial, first of all, the three POW's who she worked with, testified and many other GI's testified saying we listened to this broadcasts and we liked them. She never said anything about, you know, American ships or about, you know, all you GI's, your girlfriends and your wives that are at home doing all kinds of terrible things while you're out here risking your life against the Imperial Japanese Army. It was very, very favorable testimony on her behalf, but it was completely ignored.

BLOCK: Iva Toguri lived in Chicago until her death? Did she ever come out from under this shadow of suspicion, or did people always think of her in some way, do you think, as Tokyo Rose?

Mr. YATES: They always thought of her as Tokyo Rose. This was something - it was branded onto her soul, this Tokyo Rose thing, and she could never get off from under it.

BLOCK: Professor Yates, thanks for talking with us today.

BLOCK: Ron Yates is Dean of the college of Communications at the University of Illinois at Urbana-Champagne. He is remembering Iva Toguri, who was convicted of treason and later pardoned by President Ford. She died yesterday in Chicago at age 90.