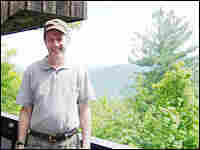 On the Genesis of 'Different Trains'

Excerpts of compositions by Steve Reich

'Different Trains: America -- Before the War'

On Tuesday, the American composer Steve Reich turns 70. Reich is one of the pioneering minimalist composers, a style of music characterized by an almost hypnotic repetition, with subtle changes in texture. His restless, muscular music has been a fixture on the world culture scene since the 1970s. In an unprecedented collaboration, three of New York's major cultural institutions are presenting a monthlong festival celebrating his work.

It's not every day that Lincoln Center, the Brooklyn Academy of Music and Carnegie Hall get together to honor a single artist. But Ara Guzelimian, Carnegie Hall's artistic adviser, says if there's anyone who can bring these competing arts organizations together, it's the New York-based Reich.

"For once, rather than celebrate a composer 250 years after his birth, as the music world has done for Mozart this year, we're celebrating — in a very big way — somebody sitting in our midst," Guzelimian says.

Reich majored in philosophy at Cornell University and is a Judaic scholar. His musical tastes, though, are catholic: They range from classical composers such as Stravinsky and Bach to jazz greats John Coltrane and Thelonious Monk to African drumming and Balinese gamelan.

After Reich graduated from Cornell, he studied composition at Juilliard. At Mills College, he studied with composer Luciano Berio, who wrote in the mathematically rigorous 12-tone style that was all the rage in the late 1950s.

Though he writes his music in a language that's accessible for most listeners, Reich is constantly pushing boundaries and using new technology. In the 1960s, he experimented with tape loops. And his 1988 composition "Different Trains" used the latest digital technology to incorporate recorded voices of Holocaust survivors with instruments.

As he enters his eighth decade, Reich is doing anything but slowing down. Three of his pieces will have New York premieres, next to older work, at all three institutions.