Accessibility links
Suburban Lawn Run-Off Poisons Aquatic Life Pyrethroids, the synthetic cousin of a pesticide made from chrysanthemum flowers, are in many household products -- everything from lawn-care products to dog shampoo. California is the first state to closely examine the environmental impact. 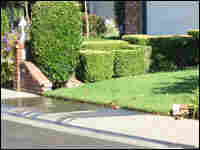 Urban drool refers to the low-level runoff that occurs all summer long from the overwatering of lawns and landscaping. The runoff potentially carries pesticides with it to the creeks. Erin Amweg hide caption 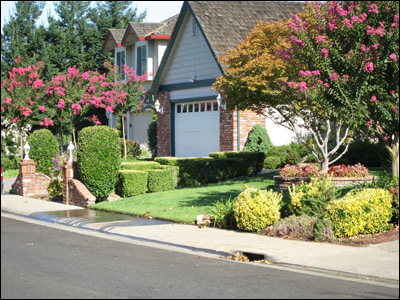 Urban drool refers to the low-level runoff that occurs all summer long from the overwatering of lawns and landscaping. The runoff potentially carries pesticides with it to the creeks.

A class of common pesticides you probably have stowed under your kitchen sink or out in the garage may be more harmful to the environment than originally thought.

Pyrethroids are the synthetic cousin of a pesticide made from chrysanthemum flowers, and they're in everything from ant spray to dog shampoo. California is the first state to closely examine the environmental impacts of these very common products. And it recently launched the state's largest pesticide re-evaluation ever.

Pyrethroids (pronounced pie-WREATH-royds) became the pesticide of choice as more problematic agents like DDT and Diaznon were phased out. Now, between agricultural, commercial and home applications, Californians alone use nearly a million pounds of pyrethroids a year.

Mary-Ann Warmerdam is director of the California Department of Pesticide Regulation. The department is undertaking a rare re-evaluation of more than 600 pesticide products containing pyrethroids.

"These are viewed as softer materials, easier to use, less toxic to the environment," Warmerdam says. "We would very much like to see these materials continuing to be available to the consumer market. Consumers want these products. Our concern is, why are these products finding their way into places they shouldn't be?"

Turning Up Toxic in the Suburbs

One place where pyrethroids have turned up is a creek running through a Sacramento suburb. University of California at Berkeley researcher Don Weston is up to his knees in water. Wearing waterproof duck-hunting pants, he sloshes through the creek, gathering samples of its muddy bottom and scooping the sediments into a gallon-sized jar.

He's looking for pyrethroids. In an earlier study of this creek, he found enough of the synthetic chemicals in some of the sediments to kill off the small invertebrates he uses in lab tests.

Turning Up Toxic in Urban Streams

When pyrethroids were originally approved for use, it was assumed that they wouldn't hurt aquatic life because they don't persist in the water column. However, pyrethroids are drawn to sediments like a magnet where they do persist. The existence of pyrethroids may be harmful to tiny mud-dwelling critters and potentially for the fish that eat those critters.

In urban streams, Weston says, the toxicity isn't caused by big industry or farms -- it's mom and dad and two kids and a dog, and the pesticides that we use to try and keep the bugs out of our house and off our property.

To the San Francisco-based Pesticide Action Network this re-evaluation of pyrethroids is good news. Susan Kegley is a senior scientist with the group.

"I'm hoping that there will be some restrictions on use," Kegley says. "Getting the stuff off the market would, of course, be the first choice altogether."

That of course, isn't the first choice of the 123 companies whose products are up for review.

Parry Klaussen is executive director of an industry-funded group called the Coalition for Urban Rural Environmental Stewardship. "The writing is on the wall," Klaussen says. "If people don't figure out how to use these correctly, the government is going to take them away."

Klaussen says if people want to continue killing ants and other pests with a quick spritz, there are no good alternatives available.

But if consumers are willing to use the pesticide differently, Klaussen believes the product can be used in a way that doesn't allow it to end up in streams.