Accessibility links
Restaurateur Shares the Secret of His Success Danny Meyer has built an empire of 10 restaurants in cutthroat New York City. In his new book, Setting the Table, Meyer explains that more than good service, hospitality is what sets his eateries apart from others.

Listen
Restaurateur Shares the Secret of His Success 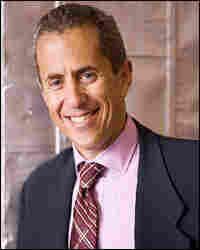 Danny Meyer, author of Setting the Table, credits what he calls "enlightened hospitality" for the success of his 10 restaurants. Scroll down to read an excerpt. Michael Weschler hide caption

The Hard Lesson He Learned When Julia Child Came to Dine

Restaurants in cutthroat New York City come and go like the seasons.

Given those odds, restaurateur Danny Meyer's track record is amazing. He has built an empire of 10 dining spots, from Gramercy Tavern and a burger joint called Shake Shack to his original eatery, Union Square Cafe.

People certainly come for the food. But Meyer says that what sets his restaurants apart is something that's in the air, not on the plate.

Each diner "needs to believe that they're the only one in the world that matters," he says.

Good service is important but will only get you so far, Meyer says. Hospitality -- the quality that makes customers feel good and want to come back -- is what counts.

Meyer shares the secret of his success in a new book, Setting the Table. More than just the tale of a profitable restaurateur, it's a guide for any business that deals with the public. 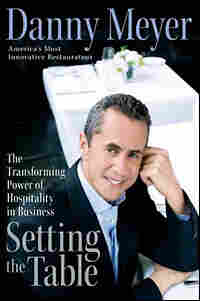 I've learned more of what I know about life from people than from books, and I've learned much of what I know about people from the food they eat. I'm on the road a number of days each year, solo, or with my family, buddies, or colleagues -- and when I travel, the first thing I do in my first free moments in a town is visit its food markets, pastry shops, butchers, and grocery stores. I read menus posted outside restaurants. I watch the residents argue back and forth with the merchants over the virtues of their wares. When I meet people who look like locals, I ask them where they'd eat if they had only one or two days in town, as I do. Cultures that care deeply about food often care about life, history, and tradition. I'm constantly on the lookout for local idiosyncrasies, ways of eating that exist nowhere else. And I'm always energized by a hunt for the best version of any local specialty.

In towns throughout Italy's Piedmont I've tasted a meringue-hazelnut cookie called brutti ma buoni ("ugly but good"). In Siena I've searched for the supreme panforte, a sweet cake. In New York's Chinatown I walk into butcher shops -- not necessarily to buy, but to observe how people select their cuts of meat and and sausage. In Maine, of course, I cherish tiny wild blueberries. In northern Wisconsin I'm unable to resist perch, bass, pike, and Native American fry bread. In Miami, I look for Cuban counter restaurants. In Texas, there isn't time enough to visit all the Mexican taquerias for breakfast. And the barbecue -- within a thirty-five-mile radius of Austin in the Texas Hill Country lie five towns I revere, each with a distinctly different style of barbecue. The elements of barbecue are limited -- ribs, brisket, pulled pork, chopped pork, minced pork, sausage, chicken, cole slaw, beans, and a handful of side dishes -- but it has become an American culinary language with thousands of dialects and accents. I try to understand each variation. During one thirty-six-hour road trip through North Carolina, I tasted fourteen variations on chopped pork, each defined by subtle and dramatic differences in texture, the degree and type of smoke used, the amount of tomato or vinegar in the sauce, how much heat was applied to the meat, as well as how much or how little crackling got chopped up and tossed in. And that's in addition to checking out the many styles of fried chicken, Brunswick stew, and hush puppies on offer.

From as far back as I can remember, I've been eating with my eyes, nose, and mouth. When I was four I fell in love with stone crab at the Lagoon restaurant in Miami Beach. I couldn't stop eating it (and apparently I couldn't stop talking to anyone who would listen about the "cwacked cwab"). Over the next years I remember savoring variations of key lime pie in Key West; eating my first roadside cheeseburger somewhere in the hills outside Santa Barbara; trying Dungeness crab and saline abalone at San Francisco's Fisherman's Wharf; and having a lobster roll in Ogunquit, Maine. I devoured my first custardy quiche lorraine as a seven-year-old when my parents took us to the city of Nancy in France. I tasted bottled water (Evian and Vittel) for the first time in the town of Talloires, and I can also remember exactly how the water of Lake Annecy tasted as I swam in it. I discovered fraises des bois (wild strawberries) and crème fraîche at La Colombe d'Or in Saint-Paul de Vence; I tasted a baguette with saucisson and pungent moutarde in Paris's Jardin des Tuilieries. My writing improved because my mother insisted that I keep a diary of our trip. At the time, I hated doing this. But the diary turned out to be one of the greatest gifts she ever gave me. I wasn't writing about the museums and churches we'd seen. Instead I chose to write about food.

Back in my hometown, St. Louis, I was no less curious about what people ate. When I brought my lunch from home to elementary school, I swapped and shared sandwiches, not because the other kids' lunches were better, but because this was the best way I knew of to learn about another family. I had never heard of Miracle Whip until I traded my braunschweiger on rye with another kid for his baloney sandwich (one slice of Oscar Mayer and Miracle Whip on Tastee white bread). It tasted nothing like the Hellmann's mayonnaise we used at home, and I began to understand something about families, solely on the basis of their preference for Hellmann's or Miracle Whip. I was fascinated to discover that the household across the street used Maull's, the thin, tangy classic St. Louis barbecue sauce, whereas my family was in the more mainstream Open Pit camp, using it as a base to be doctored with other ingredients. I learned that various brands of peanut butter tasted better with certain brands of jelly. I observed that some families chose Heinz ketchup, while others used Hunt's or Brooks. I got to know and cared about the differences in the flavors of these ketchups.

These explorations of food not only taught me about myself and others but were central factors in how and why I chose to go into the restaurant business, and perhaps even in why the restaurants have fared so well. My discoveries have also convinced me that there's always someone out there who has figured out how to make something taste just a little bit better. And I am inspired by both the search and the discovery. The restaurants and other businesses I have opened in New York City -- Union Square Cafe, Gramercy Tavern, Eleven Madison Park, Tabla, Blue Smoke, Jazz Standard, Shake Shack, The Modern, Cafe 2, and Terrace 5 (our cafés for visitors within the Museum of Modern Art), plus Hudson Yards Catering -- were all conceived and are all driven by a passion to add something new and compelling to what I call a dialogue between what already exists and what could be. When I decided to create Tabla, our Indian-inspired restaurant, I wrote a list of ten things that one could ordinarily expect of an Indian restaurant in New York -- they included a predictable menu; ornate décor with background sitar music; and austere service and hospitality. Then I asked myself what Tabla might add to these expectations -- what it could perhaps add to the dialogue New Yorkers already had with Indian restaurants. Although its earliest years were rather rocky -- perhaps because we were trying to learn and educate at the same time -- Tabla has more than exceeded my goals for it, pioneering "new Indian" cooking in America and building a solid foundation of loyal customers. Perhaps the surest sign of its success is that it has inspired derivative restaurants in New York and beyond.

Whether the subject is Indian spices, new American cuisine, the neighborhood bistro, barbecue, luxe dining, a big-league jazz club, the traditional museum cafeteria, or hamburgers and milk shakes, my passion is always to explore the object of my interest in depth, and then to combine the best of what I've found with something unexpected to create a fresh context. I then look at the result and ask myself and my colleagues what it would take to do this even better. Creating restaurants or even recipes is like composing music: there are only so many notes in the scale from which all melodies and harmonies are created. The trick is to put those notes together in a way not heard before. For us, the ongoing challenge has been to combine the best elements of fine dining with accessibility -- in other words, with open arms. This was once a radical concept in my business, where excellent cuisine was almost always paired with stiff arm's-length service. Sometimes, we've moved in the other direction, beginning with the casual atmosphere of a barbecue joint or a shakes-and-burgers stand, and then attempting to exceed expectations by employing a caring staff and using the finest ingredients. Our formula is a lot tougher to achieve than it sounds, but it can be applied successfully to virtually any business you can name.

Excerpt from Setting the Table: The Transforming Power of Hospitality in Business by Danny Meyer. All rights reserved. No part of this book may be used or reproduced without written permission from HarperCollins Publishers, 10 East 53rd Street, New York, NY 10022 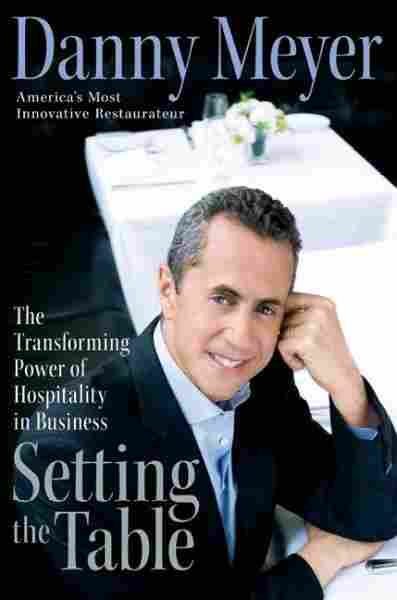 The Transforming Power of Hospitality in Business