Accessibility links
A Jewish Soldier Witnesses Nuremberg Commentator Clancy Sigal was a sergeant in the American army of occupation in Germany, the only Jew in his unit. He remembers vividly his visit to the Nuremberg Trials. 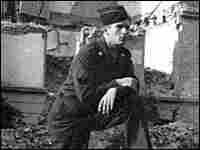 Commentator Clancy Sigal was a sergeant in the American army of occupation in Germany. Courtesy Clancy Sigal hide caption 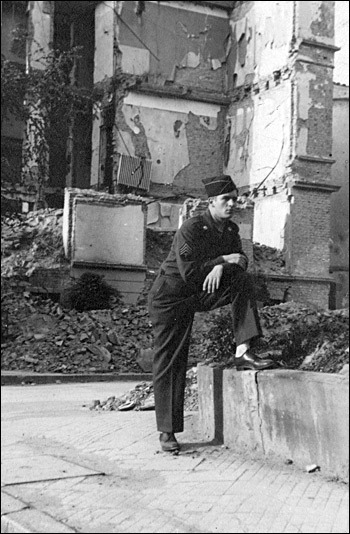 Commentator Clancy Sigal was a sergeant in the American army of occupation in Germany.

The evidence presented was the first account to the world of the Nazis' atrocities and mass murders. Commentator Clancy Sigal was a sergeant in the American army of occupation in Germany.

I was the only Jew in my unit. I told no one when I put my .45 automatic in my holster and sneaked away to the International War Crimes trial at Nuremberg.

I wanted to look Herman Goering in the eye and shoot him dead.

Next to Adolf Hitler, Goering was the most powerful man in the Nazi Third Reich. He created the first concentration camps and he was the driving force behind the decrees which stripped Jews of their civil rights.

In the foyer of the court building, Furtherstrasse 22, military police made me check my weapon. At first I was angry. I'd stored up a lot of hatred for the top Nazis like Goering who'd operated the "Final Solution" to kill Jews.

But inside the courtroom I felt something like relief. Suddenly, it was unthinkable to add one more act of violence to the solemn, businesslike presentation of evidence. Evidence which included the shrunken heads of tortured prisoners and lampshades made of human skin. It moved me beyond tears to a sort of numbness.

The U.S. War Department was determined that Goering and the other Nazis leaders would receive a fair trial. At Nuremberg, there would be no secret evidence or closed proceedings. The Allies believed that would betray their ideal of restoring democracy in Germany.

For three days, I couldn't take my eyes off Goering, who lounged in the dock like a bored Roman emperor. Minus his sashes and medals, he looked slightly naked in a white uniform jacket, even emaciated down from his former huge bulk.

As concentration camp survivors testified, I sometimes caught Goering's cold, unblinking stare, which was full of contempt for the Tribunal and the witnesses.

When the prosecution showed films of piled-up corpses at Auschwitz, Goering kept turning his head away, sometimes in my direction. I'm ashamed to say he stared me down, because I'd never before felt myself in the presence of such unmitigated evil.

I returned to my unit and didn't see Goering testify on cross-examination. Newspaper and radio correspondents like Walter Cronkite told us of his brazen lack of repentance in the witness box.

On Oct. 1, 1946, the Allied judges handed down their sentences. Most of the accused were found guilty and sentenced to death. Goering swallowed a cyanide pill just hours before he was to mount the gallows.

Today, in the midst of a national debate on how to treat captured terror suspects, my mind flashes back to Room 600 at Furtherstrasse 22. We gave Goering and the other war criminals a chance not only to defend themselves but in some cases, preach hate and violence.

In a ruined Germany, where so many corpses still lay buried in the rubble, and life seemed so very fragile, we found it in ourselves to give the worst of men due process.