Listen
Big Bucks on the Horizon for Bass Fishermen? 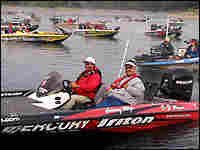 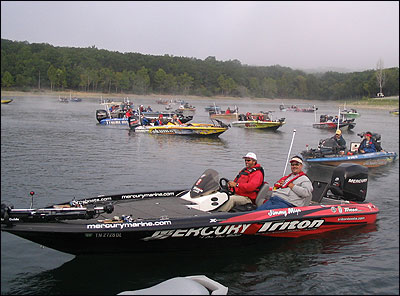 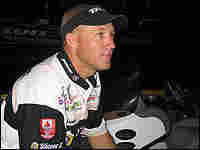 Most people don't think of bass fishing as a spectator sport. That is, unless you're one of the millions who tune in to ESPN every week to watch bass fishing on television.

Professional bass fishing is drawing new fans. Its growth, along with a wild-man attitude among some of the younger anglers like Mike Iaconelli -- and the increasingly large purses and growing corporate sponsorship -- are all changing the face of tournament fishing.

It's barely dawn at the What's Up Dock marina in the sleepy town of Kimberling City, Mo., where the juggernaut that is big-time professional bass fishing has come to town.

Bobbing in the waters and fog of Table Rock Lake are 101 brightly colored bass boats. Their propellers sputter as they wait for the signal to take off.

One of the contestants, Florida's Pete Ponds, says that, to be successful, anglers have to be focused.

An obsession that, for the moment, doesn't pay nearly as well as any of those other sports.

These fishermen do see themselves as athletes. For three days prior to a tournament, they are out on the water practicing, often for 12 hours at a time, marking spots and plotting strategy.

"It's truly an endurance sport," says Brent Chapman, another tournament pro. "I've fished with quite a few different athletes over the time, and halfway through a hard day's fishing, they're worn out."

A New Market for Corporate Sponsors

Chapman is fishing this season with the backing of a large corporate sponsor. His black and gold boat is plastered with the Silicon Two logo, which advertises a line of caulking products made by General Electric.

"We were excited to become one of the first major sponsors not strictly from the fishing industry," says Jay Osgood, who works for GE's marketing department. "When we looked at the demographics, we realized we wouldn't just be reaching the fishing industry, but also the contractor, the do-it-yourselfer, the homeowner."

GE won't say exactly what it spends to sponsor Chapman, though Osgood says it's small compared with what the company spends on NASCAR.

Having a big corporate sponsor is still a rarity. Most of the men on this tour struggle to make ends meet. They must consistently finish in the top half in order to make any money.

One way the organizers of pro bass fishing are trying to enliven the sport is by creating more interaction with the fans, many of whom travel long distances to attend the events. Each afternoon, when the day's fishing is done, anglers bound up onto a large stage plastered with corporate logos to have their fish weighed. A jumbo TV screen shows the day's highlights.

Unfortunately for Chapman, he doesn't do well on this first day of the tournament. He has caught just two small fish, leaving him in 54th place.

The Dennis Rodman of Fishing?

The anglers on the tour all seem to get along, but there is tension, too. Not everyone likes Mike Iaconelli's antics.

"I've tried to make a name for myself by being professional, I think some other people try and go the opposite route," Chapman says. "Try and do the Dennis Rodman-type stuff. I think the fishermen that try and do that, they are going to be a flash in the pan."

But Iaconelli believes he is bringing a new level of excitement to the sport. Iaconelli is sponsored by Toyota. He has his own line of T-shirts and he has been on shows like Jimmy Kimmel Live. He has even sold the rights to his life story. He admits that his personality may not appeal to everyone, but says that he and some of the other anglers on the tour are connecting with fans.

"It's nice that you're seeing different personalities," Iaconelli says. "I don't think you want to see one personality across the board. And so we've got a whole bunch of different kinds of people here. And when you show that, it's great because people can relate to those personalities, and it's nice to have that."

Standing in front of the weigh-in stage are bass-fishing fans Kurt Daugherty and his son. The older Daugherty says he'd like to see more professional fishing on television.

"They show golf and basketball on TV all the time," Daugherty says. "They never show the bass masters on regular TV, like on Sundays down here. … They should, because there are more people down in this area that bass fish than play golf."

ESPN bought the Bass Anglers Sportsmen Society, or BASS, several years ago and has been working to increase the visibility of professional fishing.

ESPN is trying to take a page from NASCAR as it looks to make the sport more TV-friendly. The cable network provides video highlights of the major tournament events. And it does same day coverage of the Bass Master Classic -- bass fishing's version of the Super Bowl, which features a $500,000 first prize and, last year, attracted 9.5 million TV viewers.

But for most on the pro tour, landing a major corporate sponsor is as challenging as winning a major tournament.

Sitting outside the travel trailer he takes on the road to keep expenses down, 35-year-old Terry Butcher from Talula, Okla., can only sit and wait to see who wins here at the last major competition of the season. Butcher was eliminated after the second day. He won't get a paycheck from this event.

He says it's been a tough year, but he isn't ready to quit yet.

"You have days you think, 'Man, why am I doing this?' But you sleep it off, think about it for a day or so and you're ready to go again."

Without a major corporate backer, Butcher says that deciding whether to continue is an annual decision. He knows that some of the fishermen at this event won't be back next year.

In the end, Todd Faircloth, a pro from Texas, walks away with the $100,000 first prize at Table Rock Lake.

Brent Chapman is also knocked out of the competition, left to wonder what went wrong in Missouri and how to ready himself for next year.