Accessibility links
Reporter's Notebook: 'Regular Joes' Campaign NPR's David Greene has been covering a Congressional race in Iowa, where both candidates are going out of their way to prove that they're just "regular guys."

NPR's David Greene has been covering a Congressional race in Iowa, where both candidates are going out of their way to prove that they're just "regular guys." 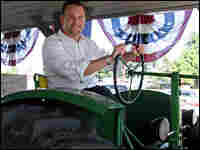 NPR's David Greene was in Iowa this week, reporting from the Congressional campaign trail, and there he found two candidates with fancy pedigrees eager to show that they're just a couple of regular guys. Here's his Reporter's Notebook.

DAVID GREENE: Mike Whalen is a Republican running for Congress. He graduated from Harvard Law School, but he seems to realize that's not what's going to get him elected. So he plays up other parts of his resume, like the fact that he owns the Machine Shed, a restaurant on Interstate 80.

GREENE: Whalen was happy to offer a full tour of the Machine Shed, including his country store.

GREENE: Is that John Deere Monopoly?

GREENE: Then Whalen got another idea: let's take the NPR reporter on a tractor ride out in the parking lot.

Mr. WHALEN: You ever driven a tractor?

Mr. WHALEN: Well, you know what? You look like you probably are in need for a little cultural enlightenment.

GREENE: Whalen is taking pains to stress that he's just a regular guy - man of the people, friend of the farmer. Never mind that Harvard Law pedigree. He blasts his Democratic opponent, Bruce Braley for being lawyer.

Mr. WHALEN: Now, maybe if Mr. Braley'd get out of the courtroom and into the dining room, he'd know that lawsuits drive jobs and doctors out of our state.

GREENE: Independent-minded Iowa voters say they'll vote for a likeable person regardless of party. So this image making is serious business and the Democrat is not about to be outdone.

Mr. BRUCE BRALEY (Congressional Candidate): I was born in Iowa. I grew up in Iowa. I got all of my education in Iowa. I got my first job working in Iowa when I was in the third grade, and I've been working ever since.

GREENE: This is Braley on Iowa Public Television talking about his life without the part about being a lawyer.

Mr. BRALEY: And I'm the type of person who can relate to the needs of the average Iowans in this district who need someone in Washington fighting to be their champion.

GREENE: I sat down with Braley at a diner and asked him about all this talk of being the regular guy.

Is it fair to say that both sides, it's the same sort of thing? I mean, you're real Iowans and then the political reality, or...

Mr. BRALEY: No. It is not, because unlike me, my opponent wasn't born in Iowa. He was born in Illinois, grew up in Illinois.

GREENE: Which side of the river the candidates were born on, just one of the issues that may influence who gets to go to Congress, and which party runs Congress after this election.