The new NBC sitcom Twenty Good Years is a rarity for television: It focuses on characters over 50. Networks haven't pursued older audiences because advertisers pay more to draw in younger viewers, whose brand loyalties aren't established. But with boomers' big spending habits, that may slowly begin changing. 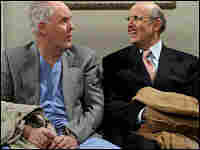 The new NBC sitcom Twenty Good Years stars John Lithgow (left) and Jeffrey Tambor as two old friends who decide to seize the life that's left to them. It is the rare TV sitcom that stars characters over 50. Courtesy NBC hide caption

The fall TV season has just gotten underway, and graying - silvering, we prefer to say - Baby Boomers might feel a bit neglected. Broadcast networks just aren't interested in pursuing older audiences because advertisers pay more for commercials on programs that appeal to younger viewers. As Boomers age you might expect that attitude to change, because there's so many of them. But it's not going to happen fast. NPR's Kim Masters reports.

KIM MASTERS: Twenty Good Years, an NBC sitcom starring veterans John Lithgow and Jeffrey Tambor, has defied the odds. The sitcom about two aging buddies, which premiers on Monday night, is one of the very few shows on network television to focus on characters over 50.

Mr. JEFFREY TAMBOR (Actor) (as Jeffrey Pyne): Who's we?

Mr. LITHGOW (as Mason): Jeffrey, how many good years do you figure we have left on this planet?

Mr. LITHGOW (as Mason): I mean our years.

MASTERS: If audiences don't like Twenty Good Years and the show fails, they may have a long wait before another program about older characters comes along, so says Kelly Kahl who runs scheduling at NBC rival, CBS.

Mr. KELLY KAHL (CBS): I don't think you're going to see a show with a 50-plus cast anymore. I think you'd be hard pressed to put Golden Girls on the air these days. Even though Golden Girls got pretty decent demographics, because it was funny, I think you'd have a hard time getting a show like that, walking it through the development process. At some point somebody is going to stick up their hand and say this is going to skew old and won't get any younger viewers.

MASTERS: Kahl isn't defending that thinking, but he says it's deeply entrenched. Peter Francese, a demographer who works with the advertising giant Ogilvy, agrees. But he says there's some historical basis for this long-held attitude. Go back 20 years, he says, and adults who were in their 50s had lived through the Great Depression.

Mr. PETER FRANCESE (Ogilvy & Mather): They really were, I wouldn't say stingy, but they certainly saved a lot of money and were very afraid of taking on any debt. And so, yeah, there was a demographic and psychographic basis for thinking that people in their 50s and early 60s were really pretty bad consumers.

MASTERS: Francese says advertisers rightly assumed that those older audiences had made their choices, settled on a laundry detergent and a toothpaste. Times have changed, but that attitude persists, says veteran advertising executive Bill Cella, who is chairman and chief executive of Magna Global.

Mr. BILL CELLA (Magna Global): Most advertisers want to create what you call early adopters. You want people to adopt your brand and embrace your brand at an early age.

MASTERS: But Cella, himself over 50, says he's certainly receptive to changing brands, and so are a lot of aging Boomers, says demographer Peter Francese.

Mr. FRANCESE: Today's 50 to 60-year-old grew up in the post-war economic boom times. They buy trophy kitchens, second homes, SUVs, and think nothing of taking on debt.

MASTERS: Baby Boomers have $2 trillion in annual spending power. And according to Francese, the educated and affluent Boomers are buying more than just pharmaceuticals. Even when it comes to packaged goods, like toothpaste, Francese thinks the boomers are not locked into habit.

Mr. FRANCESE: They're more willing to try a new product, a new brand, than their predecessors, who were much more risk averse because they had to be.

MASTERS: If these trends are that obvious, then why should it be so hard to create a program with older actors in the lead? Here's where the networks and advertisers point fingers at each other. Ogilvy's Francese says the problem is with the networks.

Mr. FRANCESE: People who work in the television medium in general are really very young people, and they relate to each other.

MASTERS: So Francese argues that these executives simply aren't tuned into the older generation. But CBS executive Kelly Kahl says that's not where the problem lies.

Mr. KAHL: You are rewarded generally by advertisers for going as young as possible with your programming. At the same time, you know, we look at all the evidence pointing the other way, and where the country is going and where the money is going, and it puts us a little bit of a Catch-22.

MASTERS: So for some years now, CBS, which has the oldest audience among the broadcast networks, has tried to escape its image as a haven for those over 50, and it has made progress. But advertising executive Bill Cella says attitudes are changing. And as they do, he thinks CBS chief Leslie Moonves will find that Boomer audience is more useful than expected.

Mr. CELLA: His programming has a strong delivery of 50-plus viewers that are no longer throw-aways. They're meaningful viewers who can buy any product you want to sell.

MASTERS: CBS executive Kelly Kahl says shows are not likely to focus on characters over 50, but he does see the network starting - perhaps not even consciously - to broaden their audience.

Mr. KAHL: Whereas maybe they would have all 20-somethings or 30-somethings, now it's not unusual on some of these ensembles to see a 50-year-old or even a 60-year-old; just more of a spread, a little more variety in terms of the ages of the characters.

MASTERS: At this point, however, Kahl says even when CBS attracts a wider audience - as it does for CSI, which has an over-50 lead character - advertisers are only willing to pay to reach the younger viewers. But with the digital revolution in full swing, older viewers may start commanding respect for another reason. The younger audience is spending more time on the Internet and elsewhere. And demographer Peter Francese says Boomers are far more loyal in their viewing habits.

MASTERS: Boomers may only provide temporary relief, but with technology moving at such a dizzying pace, permanence seems as old fashioned a notion as certain ideas about the over-50 audience.