Accessibility links
The Genius of Fats Waller If You Got to Ask, You Ain't Got It is Sony Legacy's new 3-CD set of jazz-great Fats Waller's best music. Historians and music critics say no one has ever quite been able to fill Waller's shoes since his death in 1943.

Listen
The Genius of Fats Waller

If You Got to Ask, You Ain't Got It is Sony Legacy's new 3-CD set of jazz-great Fats Waller's best music. Historians and music critics say no one has ever quite been able to fill Waller's shoes since his death in 1943.

That's Thomas Wright Waller, but you probably know him by his nickname - Fats.

Mr. FATS WALLER: (Musician) Swing it on out there. Nah, nah. (Unintelligible) in the state of Carolina (unintelligible).

CHIDEYA: Fats Waller was one of the country's most prolific piano composers and a beloved entertainer. A new CD collection of his work was released this week. NPR's Karen Grigsby Bates listened to it and has this report.

KAREN GRIGSBY BATES: Dan Morgenstern is director of the Institute of Jazz at Rutgers University, and he's been a Fats Waller fan for decades. In 1938, he was barely nine years old, settling in the life in Denmark after his family fled Hitler's to Austria. As a treat, his mom took him into a concert hall in Copenhagen one evening. That's where he got his first eyeful of Fats - all 6' 2” and 285 pounds of him.

Professor DAN MORGENSTERN (Director, Institute of Jazz Studies, Rutgers University): I've never seen anybody remotely like him, and of course he was an electrifying performer. And even though I didn't understand more than a few words of anguish, it was very easy to understand what he was communicating. And one of the things that he communicated was the tremendous beat that he had.

BATES: This was not namby-pamby piano. It was, says writer and jazz critic Stanley Crouch, an especially muscular kind of music.

Mr. STANLEY CROUCH (Jazz critic): He could really like, as they say in the jazz world, he could lift a bandstand. And if you got - if you stood a band with him and he started playing, you were going to play better, if only you keep from being overshadowed by your accompaniment.

BATES: That ability is evident throughout If You Got to Ask, You Ain't Got It, a three-CD compendium from Sony Legacy which contains some of Waller's best music.

Orrin Keepnews has produced jazz records from more than a half-century, including an earlier chronological compendium of Waller's music. He organized this set in three parts. In disc one, Waller's sings and plays his own compositions. Disc two is a strictly instrumental section. And in disc three, Keepnews says Waller plays and sometimes attacks popular songs of the day.

Mr. ORRIN KEEPNEWS (Producer, If You Got to Ask, You Ain't Got It): You know, there are a number of wonderful instances of Waller pulling things apart. And one of my absolute all-time favorites of his interpolations…

Mr. KEEPNEWS: And that's about as good an example of Waller at his extreme best.

BATES: This impish ditties led some people to assume that this was the complete Fats Waller. Not so, says Stanley Crouch.

Mr. CROUCH: So on the one hand, you have a guy who becomes famous not so much for being the great piano player that he was but for being a great comedian in a musical context. I think that as Martin Williams, who's known as the dean of the jazz critics once said, he was caught inside his persona.

BATES: The onstage persona people saw was joyfully mischievous in an area notorious for Jim Crow and racial violence. Looking at his performances some 60 years later, some contemporary observers figure Waller was merely putting on a happy face to avoid alienating his white audiences. Stanley Crouch says that's a ridiculous simplification.

Mr. CROUCH: I don't think anyone was either angry or depressed every second of every day. And Waller was a guy who really was connected to the black American gallows sense of humor, that is that you can make the worst things seem funny.

BATES: He could also make hard things seem a lot easier than they were. Dan Morgenstern says people don't know it, but Waller mastered in instruments some people consider even more difficult than the piano.

Prof. MORGENSTERN: It's a pity that he never got to record his favorites organ music, which was Bach. I mean he was a master of the pipe organ.

BATES: Echoes of Bach can be heard in this version of the Rodgers & Hart favorite, Thou Swell.

(Soundbite of song, “Thou Swell”)

BATES: Waller died in 1943 on an eastbound train. He'd caught pneumonia while performing in Hollywood and the medicine that would have saved him today wasn't widely available then. He was 39 years old.

Since then there's been lots of argument as to who, if anybody, is the next Fats Waller. Critic Stanley Crouch says the work of Errol Garner and Marcus Roberts, both acknowledged masters of stride piano, show Waller influence. But producer Orrin Keepnews says that kind of discussion doesn't much matter. He'd rather we listeners concentrate on something else.

Mr. KEEPNEWS: I think, you know, rather than try to worry about him as an influence, lets just enjoy him as a talent.

BATES: Not a hard assignment at all.

Mr. WALLER: (Singing) No one to talk with, all by myself. No one to walk with but I'm happy…

CHIDEYA: Thanks for sharing your time with us. We will be back tomorrow. To listen to the show, visit npr.org. News & Notes was created by NPR News and the African-American Public Radio Consortium.

Mr. WALLER: (Singing) What do I care? Your kisses are worth waiting for, believe me. I don't stay out late. No place to go. I'm home about eight, just me and my radio. Ain't misbehaving, saving all my love for you. 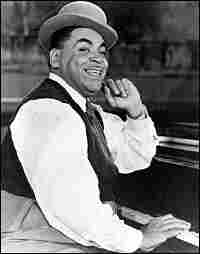 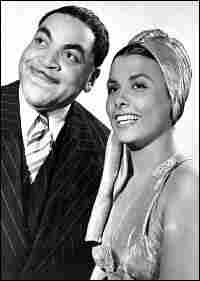 Album
If You Got to Ask, You Ain't Got It!
Artist
Fats Waller
Label
Bluebird/Legacy