Accessibility links
Americans Win Medicine Nobels for 'Silencing' Genes Americans Andrew Z. Fire and Craig C. Mello win the Nobel Prize in Physiology or Medicine for discovering "RNA interference," a way organisms turn off individual genes. The discovery is considered by many scientists to be a breakthrough in modern biology. 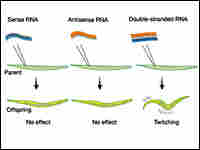 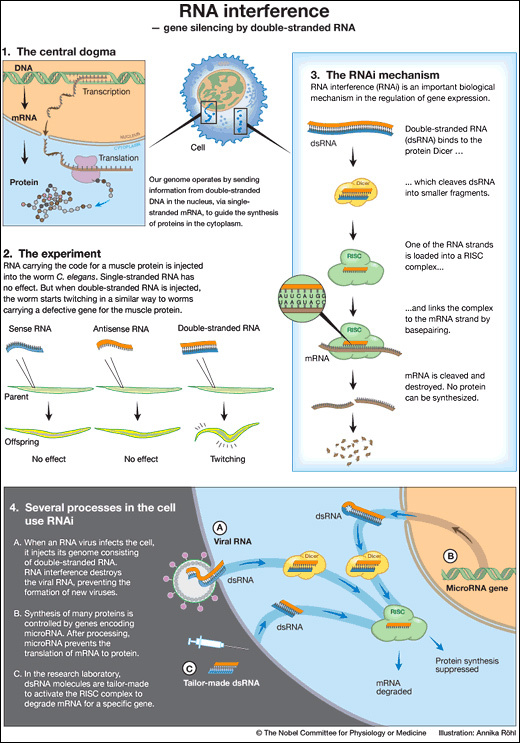 Detail from a graphic showing a basic test involving RNA.

At 45 and 47 years old, Andrew Fire and Craig Mello are younger than many of their fellow Nobel Prize winners. But the award committee is betting that the pair's discovery, RNA interference, has a bright future. The process, which can control gene activity, could lead to a new class of drugs.

The two American scientists -- Fire works at Stanford University and Mello at the University of Massachusetts -- have given biologists an important new research tool. Many believe it's only a matter of time before their discovery leads to new kinds of drugs to fight ailments as diverse as hepatitis, cancer and Huntington's disease.

William Hahn, of the Broad Institute at MIT, says that RNA interference allows scientists to turn genes off, one at a time.

"It's a lot like going to the fuse box at home," Hahn says, "and flipping switches to see what lights are controlled by which circuits."

It has been only eight years since Fire and Mello published their main findings -- but, Hahn says, RNA interference has been taken up by biologists everywhere.

"You cannot go to any lecture, or have any discussion in biological science, without talking or using RNA interference," he says.

"And because of that, I think it's very clear that this is a tool that has already transformed biology and is going to be used for the foreseeable future."

Scientists think that RNA interference first evolved eons ago to defend cells against viruses. Many viruses, such as influenza, are made up of two twisted strands of genetic material called RNA.

Fire says a cell -- any cell -- has a strong aversion to viruses made from double strands of RNA.

"It says, 'Yeccchhh! -- it doesn't want this stuff around," Fire says. "And not only does it get rid of double-stranded RNA -- it gets rid of anything that looks like it."

Cells learned how to turn off the viral genes. Fire and Mello won the prize for demonstrating that RNA interference gives biologists the ability to turn off any gene they want to.

As Craig Mello says, "RNA interference has proven to be a quite reliable mechanism for turning genes off in a whole variety of different plants and animals."

And why would scientists want to do that? The reasons are virtually limitless.

Some researchers turn off genes, one by one, to see how they function in aging. Some groups are using RNA interference to find out which genes are important in causing cancer. This spring, scientists showed they could reverse heart disease in mice by silencing a gene that makes "bad" cholesterol.

"It's accelerating the pace of discovery in molecular medical research," Mello says, "because we can learn about the function of each individual gene.

"And that's allowing researchers all over the world to begin linking particular genes with a variety of different diseases."

Drugs that use RNA interference are only beginning to be tested in humans. One of the first small studies involves macular degeneration, an eye disease.

A lot of hurdles remain. Researchers have to figure out how to usher their custom-built RNA molecules to the right location... without being broken down first. They have to demonstrate safety. The therapeutic effect needs to be long-lasting.

Fire and Mello plan to be part of the ongoing studies. The pair, who are sharing the $1.4 million prize from the Nobel committee, say they have a lot of work to do as they follow up leads from their RNA interference work.

That plan is fine with Craig Mello's mother. After learning that her son won the Nobel early Monday, she had a question for him: "You're so young, can you win it again?" 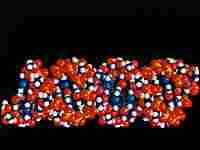 Researchers have successfully used a technique that selectively shuts off genes to lower levels of LDL, or "bad" cholesterol, in mice. The findings, reported in the journal Nature, suggest that RNA interference may be a revolutionary development for medical science. NPR's Joe Palca reports.

Genes are made up of chunks of DNA. Each gene contains the instructions to make a particular protein. Proteins do the work of our cells -- digesting food, releasing energy, sending signals to other cells.

To make a protein, another molecule called RNA (ribonucleic acid) reads the DNA instructions and then directs the protein's assembly. Think of RNA as a construction worker, who actually builds a house after reading an architect's drawings.

Most RNA is single stranded. Until 1998, researchers had thought only single-stranded RNA had an effect on gene expression. But recently, scientists discovered that relatively short, double-stranded RNA can be used to turn off certain genes -- without triggering a defensive response that results in cell suicide. This selective silencing of specific genes is called RNA interference, or RNAi.

In the Nov. 11, 2004, issue of Nature, scientists report they were able to use RNAi to lower cholesterol in mice. The researchers, affiliated with Massachusetts-based Alnylam Pharmaceuticals, used RNAi to turn off ApoB, the gene responsible for making the "bad" cholesterol known as LDL.

1. Scientists create a short, double-stranded RNA with a genetic code complementary to that of the targeted disease-causing gene — in this case, the "bad" cholesterol-causing ApoB.

2. Within a cell, this short, double-stranded RNA unwinds and gets incorporated into an RNA-protein complex — in this case, a compound that resembles cholesterol. Cells that make cholesterol also take up cholesterol, so adding the cholesterol molecule to the RNA ensures that the complex is taken up by the targeted cells.