Accessibility links
Precisionist Nears a New Pasture At a retirement home for Thoroughbred racehorses in Kentucky, a once-great stallion is nearing the end of the line. In his career, Precisionist earned more than $3 million.

At a retirement home for Thoroughbred racehorses in Kentucky, a once-great stallion is nearing the end of the line. In his career, Precisionist earned more than $3 million. 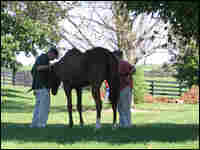 Here are some words from a reporter's notebook jotted down last Wednesday in Kentucky's bluegrass horse country. Vet kisses the horse behind his ear. This came in the moment of death for a champion race horse, a hall of fame horse 25 years old named Precisionist.

NPR's Noah Adams was among those present for the euthanasiation and the burial.

NOAH ADAMS: The horse had folded to the ground and fallen to its side. Then Dr. Holly Aldinger on her knees gave the final injection. She listened with a stethoscope and pretty soon leaned forward to kiss Precisionist goodbye, and then she stood breathing deeply.

This took place at graveside. Later a small front loader would be used to fill in the dirt. There are other graves here and other old horses in the fields nearby. This is a retirement and rescue farm for thoroughbreds set up three years ago by Michael Blowen. He calls it Old Friends Farm. Precisionist had been here just since June.

Mr. MICHAEL BLOWEN (Old Friends Farm): He was retired in Florida to a wonderful woman, a veterinarian named Dr. Siobhan Ellison and she called us one day and said he was having difficulty with the really hot Florida weather. He'd never liked the heat and she was wondering if we would be interested in having him here at Old Friends and I'm almost died because I remember watching this horse race and I was just flabbergasted and overwhelmed by that idea.

ADAMS: To put this in basketball terms, Michael Blowen says this is like having Michael Jordan around the farm to shoot hoops with. Precisionist won the Breeders Cup Sprint in 1985 and won 19 other races. When he retired from the track he had earned almost three and a half million dollars.

I met another Old Friends horse with health problems, (unintelligible), of whom Michael Bowen says he's just a bum. He only won $63,000 in eleven years of racing. He's got ulcers in his eyes now, demand lots of time. Vet bills are high, but Blowen says he's got a great story, too. And when the horses get here they're all treated the same.

Mr. BLOWEN: They're great athletes. They work all their lives for our entertainment and in some cases they make people very wealthy, and at the end of the line they don't have any social security or a 401K plan. And they should, because they earned all the money. I mean people don't go to the racetrack to watch people run around. Some people go to the racetrack and don't even bet. They're just overwhelmed by the majesty of the performance. They did it. Without them there is nothing. There's no bluegrass, there's no racetracks. I mean, there are no jockeys. There are no feed stores. They are the essence of it.

ADAMS: Back when this day began, everyone at the farm, it seemed every animal, could sense the difference. The chopping of carrots became especially good work for the volunteers.

Unidentified Woman #1: You couldn't get me to cut this many vegetables at home for anything.

Unidentified Woman #2: It's mindless work, so you don't have to think sometimes. Oh dear.

ADAMS: In the barn, where it was dark and quiet, Precisionist was eating his carrots. He was standing, swaying a bit. Another volunteer, Beth Blood, sat outside the stall watching.

Ms. BETH BLOOD (Volunteer): We were taking him off to the clinic day before yesterday and he went to the end of the barn and he saw the trailer over there and he couldn't breath very well. It sounded like he had asthma. He was like -so I think he thought he was going to a breeding farm. So he's like prancing around over there and he was off to the doctor.

ADAMS: A tracheotomy helped but there was a sinus tumor, no chance of operating, and this morning a neighboring farm manager sent over a backhoe. A grave was dug nine feet down, showing the white streaks off limestone. Michael Blowen led Precisionist out of the barn to stand in the sun and be admired and then along to the gravesite. The vet came at 12:30.

I also found in my notebook a description of the air, one word, soft here late in September. I came upon this story by happenstance. I was visiting the farm to talk with students in an equine therapy program at a nearby college. I was welcomed back the next day to witness the burial of Precisionist.